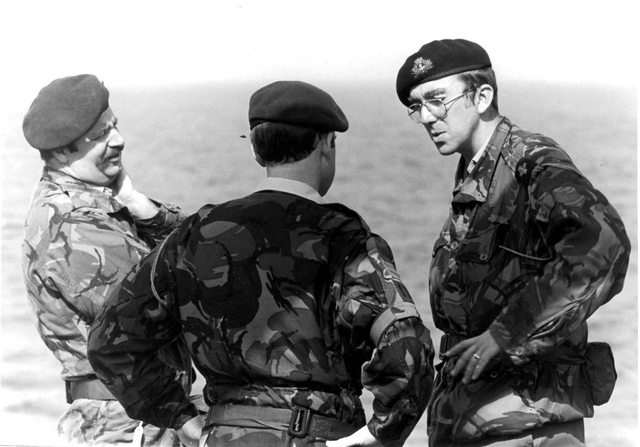 WHEN he became a naval chaplain, he never imagined he’d find himself on the frontline of an actual war.

But in 1982, the Rev Godfrey Hilliard (pictured – above right – during the conflict) was chaplain to 40 Commando, the Royal Marines who were among the first troops ashore on the Falkland Islands. He had an important pastoral role as they secured the beachhead at San Carlos – and ended up performing two baptisms on the islands.

Now 40 years later, he’ll be in Portsmouth Cathedral as we remember the sacrifices made by those Armed Forces who fought in the conflict. The service on Sunday (June 19) will start after a new memorial to those who died is unveiled in Old Portsmouth.

“I can remember when I heard that we’d be on the task force sailing to take back the Falkland Islands,” he said. “I was overcome at the time with a deep sense of inner calm, which I haven’t experienced since. I believe it was the presence of God.

“On that journey to the Falklands, I spent a lot of time listening – I really honed my listening skills. I was told not to expect many people to come to church on Sunday, but it was actually packed. There were even more on the way home, because of the sense of relief and also that sense of guilt – why were others wounded and killed and not me. It was humbling to listen to people sharing their experiences.”

Godfrey had been a parish priest for three years and chaplain to the Royal Naval Reserve from 1975 before joining the Navy in 1980. In 1982, he joined 40 Commando at their base in Seaton Barracks, Plymouth. He knew there was likely to be a tour of duty in Northern Ireland, but few people even knew where the Falkland Islands were at the time.

Once Argentina invaded the Falklands in April 1982, the decision to send a naval task force came very quickly. Godfrey found himself heading to the South Atlantic on board the cruise ship SS Canberra, and leading services in the ship’s ballroom with a team of chaplains.

“Being a chaplain in peacetime or conflict is not that different from being a parish priest,” he said. “You are paid to lurk with intent, to be there as a presence and to help them with their lives. You stand alongside them. I was only 30, so quite naïve, and no one gives you any instructions about how to be a chaplain – you just have to get on with it.

“Especially in a Commando unit, you do grow close to each other, as you depend on each other for everything. We were the first ashore, and then spent the majority of the time guarding the beachhead at San Carlos. Some of 40 Commando did supplement the Welsh Guards and were involved in the final assault on Port Stanley.

“I visited troops in Ajax Bay, which was our field hospital, and after the major battles I went to Port Howard in West Falkland. Sometimes we had to do church services in the middle of the night, because of the possibility of being attacked in daytime.

“Just like being on a ship in a storm, there are very few atheists in the middle of a battle. If I had a pound for everyone who say ‘Say one for me, padre’, I’d be a wealthy man.

“We did bury some of those who died in temporary graves in a place that is now a war cemetery. I remember when one Hindu sapper died, and I had to dissuade his colleagues from making a cross out of wood – because of course the cross wasn’t part of his faith.

“I was lucky in that I knew a Navy psychiatrist who talked about post-traumatic stress syndrome at the time. That helped us to cope with what we were seeing. The Falklands reignited the idea that warfare could result in psychological damage, and there was a new emphasis on our mental health.

“I learnt a lot from it. I’ve never forgotten seeing the victims of Bluff Cove coming from RFA Sir Tristram and RFA Sir Galahad to San Carlos and then to the hospital ship. I was sitting in a sheep-shearing shed listening to them. There was a lot of ‘There but for the grace of God go I’. It was such a privilege to hear people’s innermost fears and insights.”

On his return from the Falklands, Godfrey was given six weeks’ leave and headed off on a camping holiday with his family. But shortly afterwards, 40 Commando went on a tour of duty in Northern Ireland for six months, at a time when the Troubles were at their height.

“In the Falklands, you knew who your enemy was, but in Northern Ireland, you really didn’t,” he said. “The IRA would be transporting guns in children’s prams, or putting bombs in police stations. But the fact that I’d already seen active service did, I think, help when some of those Marines needed to talk.”

Godfrey ended up as chaplain in Portsmouth’s Historic Dockyard, but managed to spent 10 days back on the Falklands some years later. He’s now 70 and has retired, joining the congregation at Portsmouth Cathedral.

He’ll be there on June 19, as a new Falklands Memorial is unveiled. It will also include the names of all 255 members of the British Armed Forces who died in the battled to liberate the islands, including 128 soldiers, airmen, and the three civilians who died – the previous memorial only listed those from the naval service.

Two new benches will also be installed near the memorial, looking out at Portsmouth Harbour, where the task force set off in April 1982 and returned two months later. Portsmouth City Council will also grant Freedom of the City to all those who served in the conflict.

After the memorial is unveiled at 11am, a special service to mark 40 years since the conflict will begin in Portsmouth Cathedral. Godfrey will lead the citation to those who died - the 255 names will be read out by cadets from Hampshire and Sussex. For details of the service, see here.