Anniversary service recalls those who died in Falklands 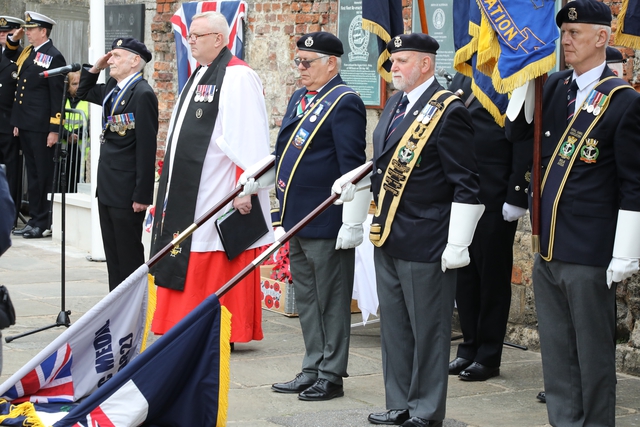 WE recalled those who gave their lives to liberate the Falkland Islands 40 years ago - and honoured those who serve their country today.

Hundreds of veterans and serving military personnel came to Portsmouth to mark the 40th anniversary of the Falklands conflict. They paraded through Old Portsmouth and saw a new memorial plaque unveiled next to the Square Tower, which means the names of all 255 members of the British Armed Forces who died are displayed at the entrance to the harbour from which the naval taskforce sailed.

They also packed our cathedral for a moving Service of Remembrance at which the names of those who had died were read out by cadets from Sussex, Hampshire and the Isle of Wight.

The day began with hundreds of veterans from all branches of the Armed Services congregating near the headquarters of Ben Ainslie Racing in Old Portsmouth. The Band of HM Royal Marines led the parade down Broad Street towards the memorial plaque next to the Square Tower. Serving military personnel and veterans from the Falklands followed and assembled around the Square Tower.

Family members and well-wishers watched from the rampart walls above as VIPs were introduced to veterans and serving members of the Royal Navy and Royal Marines. One small boy watching couldn't see his father and shouted 'Daddy, where are you?' before the ceremony started.

The Chaplain of the Fleet, the Ven Andrew Hillier, introduced the short ceremony, which included the exhortation from Paddy Docherty, chair of the Royal British Legion in Portsmouth, and Last Post and two minutes' silence, plus the South Atlantic Medal Association Prayer.

The Lord Lieutenant of Hampshire, Nigel Atkinson, unveiled the new memorial plaque, which - together with the existing plaque - now lists the names of all those British Armed Forces and three Falklands Island civilians who died during the conflict in 1982. It is placed next to Portsmouth Harbour, from where the naval taskforce sailed in April 1982 and returned that summer.

The Freedom of the City was then conferred to all Falklands veterans, members of the Royal Naval Association, the Royal Marines Association and the Association of Wrens. The Lord Mayor, Cllr Hugh Mason, made those presentations and then announced the twinning of the city of Portsmouth with the Falkland Islands.

The Remembrance Service in our cathedral was led by the Dean, the Very Rev Anthony Cane, and included a reading from the gospel of John - read out in Spanish by Anneliese Spiller and then in English by her father, Lt Cdr Nicholas Speller RN, who served on HMS Courageous during the conflict. The inclusion of the Spanish language was a recognition that 649 Argentinian solders also died in the conflict.

Then the Rev Godfrey Hilliard, who served as chaplain to 40 Commando of the Royal Marines during the Falklands conflict, read the Citation, describing how more than half of British casualties died at sea, the majority under the attacks that sank five ships and damaged eight more.

Two lines of naval cadets from Sussex, Hampshire and the Isle of Wight read out the names of all 255 members of the British Armed Forces and three civilians who had died during the conflict. The list of names was interspersed with verses from 'O God, our help in ages past', sung by the cathedral choir.

The Ven Andrew Hillier, Chaplain of the Fleet and Archdeacon for the Royal Navy, and Emerita Professor June Purvis, who was born in the Falklands, led prayers of intercession, including for those currently serving in the Armed Forces, and those seeking to keep the world at peace today. The Bishop of Portsmouth gave the final blessing before the National Anthem.