Hundreds of pupils mark the end of church school 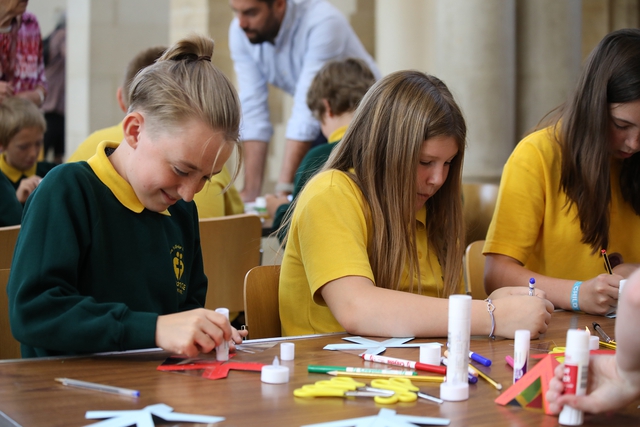 HUNDREDS of pupils are rounding off their primary education at Leavers’ Services in our cathedral.

More than 1,000 Year 6 children across our diocese are marking the moment they leave their C of E primary school with a series of workshops and special services led by senior clergy. It’s the first time our diocese has run this event in person since 2019 – and it’s spread over four days to cater for the numbers involved.

Each day, a different set of 10 and 11-year-olds are arriving at the cathedral for two hours of workshops on different themes, eating lunch inside or outside the building, and then taking part in an act of worship that gives thanks for their time at their C of E school – before they head off to secondary school in September.

Workshops led by staff and volunteers are inspiring the pupils to create prayer pyramids, draw labyrinths, improve their singing and re-enact the Queen’s coronation in her Jubilee year. The prayer pyramids involve writing prayers on the side of a pyramid, which can then be illuminated by a battery light. Children are also being inspired to develop their communication skills in a Lego challenge that involves one partner doing the building, with another holding the diagrams and giving instructions.

The Leavers' Services also mark the culmination of this year’s project devised by our education team for church schools. The Ten:Ten#flourishing project is based on the verse in John 10:10 in which Jesus says he has come to bring us “life in all its fullness”. As part of that, schools are bringing in flowers made from a host of recycled materials, to help to create a series of banners that will ultimately be displayed in our churches.

The act of worship itself is being led by cathedral clergy and our education team, and includes a short talk by Bishop Jonathan or one of his colleagues. On the Tuesday, he picked up on the Bible reading – about the Parable of the Sower - and threw seeds into the crowds of children.

He also commended them for their hard work in tackling climate change and improving ecological diversity through projects in their schools, urging them to continue to make a difference.

Children from Horndean C of E Junior School talked about their Children’s Christian Values Team, which has decided that each class should have its own plants, to show they they respect and care for the environment. The team has also encouraged each class to nominate children to be litter-pickers, and to encourage each class to have a ‘time out space’ for those who need time to calm down. And the school will create a glazed canopy which will be inscribed ‘ten:ten #flourishing’.

Pupils from St Alban’s C of E School in Havant told those gathered at the cathedral about their ‘Seeds of Hope’ project, as well as the nature and sustainability roadshow they were creating. And children from Swanmore C of E Primary School shared details about their Bee Garden, which aims to encourage bees to pollinate local plants.

Adults and children from each school are also being presented with a special Leavers’ Service candle, inscribed with our diocesan logo, which can then be lit each time that school holds an act of collective worship in school. The service also involves children singing and leading prayers.

To see more photos from the Leavers Services 2022, click here

Children enjoyed the workshops and the worship, with many of them visiting our cathedral for the first time. The workshops were being held on Tuesday, Wednesday and Thursday mornings, with the Leavers Service on those three days plus Friday.

Eleven-year-old Kristina Douch, from Horndean C of E Junior School, said: “I enjoyed designing a Labyrinth, which really fun. It’s also quite cool that we got to learn about the cathedral being the cathedral of the sea.”

Dexter Edgell, 11, also from Horndean C of E Junior, said: “I liked the singing practice, and also the building with the Lego. You had to show teamwork to build the Lego, and I quite like challenges like that. I’m very interested in the cathedral organ, as I love musical instruments.”

Summer Chambers, 11, from Newport C of E Primary School, said: “I liked the Lego challenge, but it was quite hard, as your partner had to tell you how to build it, and use words instead of showing you a diagram. I also liked the tour of the cathedral - I got to see lots of things I wouldn’t see on the Isle of Wight.

“It’s sad to be leaving primary school, as some of my friends are going to different secondary schools. But it’s exciting as well to be going to a new place.”

And Cooper Woodford, 10, also from Newport C of E Primary, said: “I quite like the Coronation activity, as me and my friends Jacob had to hold up the Queen’s dress and walk down the aisle, as if it was the Coronation. And it was good to design our own prayers on the pyramid candles.”