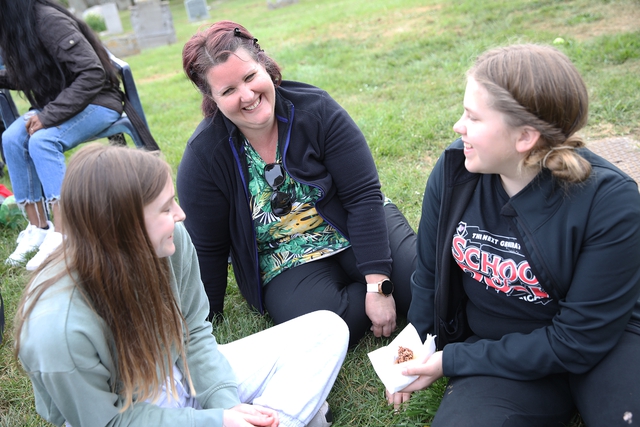 VOLUNTEERS at St Mary’s Church, Portchester, have shared their tips about how to help youth groups to thrive.

They offer two different youth groups on a Friday night, both based at Portchester Parish Hall. ‘Connect’ is aimed at those aged nine to 12 and meets from 6.15pm-7.30pm. It offers activities, games and a tuck shop. It’s followed by ‘Momentum’, for those aged 13 and over, from 7.30pm-9pm, where the activities might include a more serious discussion.

Youth leader Tanya Simpson believes it’s crucial to engage with young people on their terms – find out what they’re interested in first.

“You have to do stuff that interests them, that will be relevant to their age group,” she said. “As well as the games and craft, we might have a discussion about TV or the media, or hear from a speaker about drugs. Then we might offer a Christian perspective on that. Not everyone is a churchgoer, so there is no point starting with the Bible first.”

The parish offers monthly events to which the young people can bring the rest of their families, such as barbecues and games nights. This helps church leaders get to know the teenagers’ parents too, which means they can reach out to whole families.

Ursula Pearce, whose daughter Imogen, aged 16, enjoys the weekly Momentum group said: “We’re not regular church attenders, but it’s good for her to meet with others, and she knows some of them who go from school. She’s taking GCSEs, so is deciding about things like faith, whether she wants to take confirmation classes, and what worship style she prefers.”

And parish administrator Emma Capps, whose children Zoe, 14, and Ashby, 11, are part of the youth groups, said: “We came from Lee-on-Solent, so we didn’t know if the girls would know anyone. But they really feel at home in the groups, and feel they can bring friends.

“They also do a ‘youth takeover’ on some Sundays, which encourages the parents to see their children taking part in services, and a Christmas pantomime is being planned.”

Eleven-year-old Phoebe Yates-Owen, who is part of Connect, said: “It’s great. We play games, have quizzes and snacks, and have trips. We also hear some Christian stories and learn about Jesus. We all know each other and no one gets left out.”

And volunteer leader Emily Hensman, who grew up at St Mary’s Church, wishes there had been something similar when she was a teenager. She said: “I’ve been training to be a primary school teacher, and have just got a job in a school. I love supporting young people and providing a space for them to thrive. We don’t push the Christian message, but we slowly bring it into the conversation.

“I’ve been at the church since I was five. There wasn’t anything like this when I was a teenager, so I know how important it is to have this support available as you grow up.”

Another volunteer leaders Leroy Osbourne and Dillon Simpson go into local secondary schools in Portchester to talk about faith and invite pupils to their two youth groups.

“No one has to have any faith before they come – we just allow God to work in them once they are there,” he said. “I think it’s important to share stories and hang out with young people to build relationships. Then we can have those important conversations with them.”

Youth leaders took several of their young people to the High Tide residential weekend on the Isle of Wight earlier this year, and were thrilled to see them develop in their faith and discipleship.

The church is now looking to employ a paid youth worker to develop this work further. See below for details.

See the map below to find out where the Connect and Momentum groups normally meet on a Friday night: