‘Bringing RE alive is such a privilege’ says island teacher 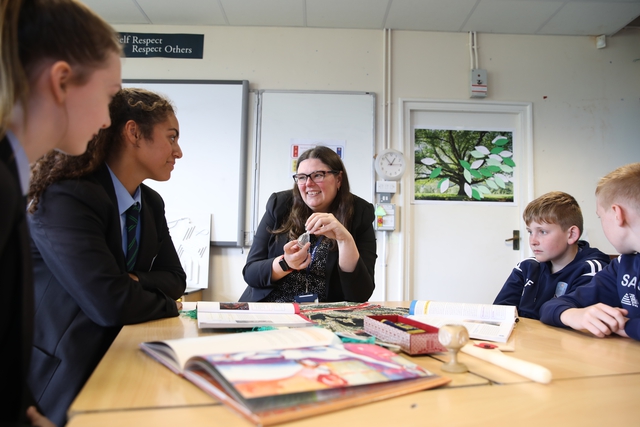 WHEN Beth Feltham talks about how much she loves teaching, her enthusiasm is evident. And when she’s actually with pupils, it’s even more obvious.

The Religious Education teacher comes alive when she gets to talk about faith and its impact on our lives. And she likes nothing better than being challenged by the secondary school students she teaches.

“I love teaching, and every day I love coming into work,” she said. “There’s not a single textbook in my classroom, because I want the students to talk about things. I try to bring things alive for them, and it’s such a joy to see the cogs whirring, and then to see the children talking to each other about the exciting things they’ve learnt.”

Beth leads the RE department at The Bay C of E School in Sandown, teaching those aged between 11 and 16. The Isle of Wight school spans both primary and secondary age groups, and on the secondary site she’s also in charge of Personal, Social and Health Education and Christian distinctiveness.

She’s been at the school for nine years, joining them before it switched from being Sandown Bay Academy to becoming a church school. And she enjoys being there so much that she travels in from Weymouth each week.

“I grew up in a Church of England school, and I did RE for A-level, which I adored,” she said. “I also did some work experience in a nursery and primary school during my sixth form, and discovered that interacting with young people was really enjoyable. I decided that’s what I wanted to do.

“I was keen to stick with the RE and explore my faith in my job, so I did an RE degree at Lampeter. The course included looking at how Christianity shared physical and spiritual space with other religions, so I spent time in Egypt and in India, where I also taught English as an additional language.

“At Lampeter, I also went into a secondary school and loved that. I liked the fact that the students would question me and then I could push them to think further. I did an MA and a PGCE in RE and Citizenship. I remember the day that I taught my first lesson – a Year 7 group. I was so worried that I’d forget people’s names.

“Partly that’s because I see teaching as being about relationships, and helping the young people to be confident enough to voice their own opinions. I don’t think they should just learn facts that someone else has told them, but think about things for themselves. Building relationships is just the start of that process. I want them to make their own decisions about how they see the world, the media and the big issues – and to stand up for what is important.”

Beth’s first teaching job was at a comprehensive school in Oxfordshire. She then taught A-levels in multiple subjects at the Isle of Wight College for two years, before landing the job of Head of RE and Citizenship at Sandown Bay Academy.

“One of the things that convinced me that I wanted to be here was that on interview day, the Head of HR had baked us all piles of home-made cakes,” she said.

“They also took us into the staff room where there was a leaving do for one of the teachers, which they allowed us to join in. The whole day was like that – it felt like there was so much effort to make us feel welcome. And of course it’s the people that make a school great, and my department certainly wouldn’t run without amazing people.

“No one goes into teaching for the money or the status. It’s about the feeling you get in an environment where everyone is trying to make a difference to the lives of these young people, whether they are teaching them, cooking for them in the canteen, or keeping them safe as caretakers.

“When the academy decided to become a C of E school, I was very excited, because I know the difference that makes. It’s not about trying to make the children into Christians – it’s about sharing certain values, and talking about why the Christian faith is important.

“It also means you are part of a network of C of E schools, with support from the diocese. We also have two local vicars as governors, Jonathan Hall and Mark Williams, who are very supportive, and we know people in church are praying for us.

“Our students have picked out the values that they want to see our school promote. They’ve picked ‘kindness, courage, respect and trust’ and we are in the process of putting these on the wall in our entrance hall to remind us all as we come in and go out. We can tell our students that Jesus had those values. And those are values that we can share with pupils’ whole families.

“It’s also really exciting to see how the Christian ethos can be an integral part of other subjects too – you can talk about how faith is perceived in Macbeth in English lessons, or throughout the centuries in History.”

At The Bay School, all students study RE between the ages of 11 and 16, with extra lessons for those who sit the GCSE exam. As part of their studies, they can visit churches to see how people are baptised, as well as other places of worship. The RE department has recently moved into a new set of classrooms, and hopes to create an outdoor space for worship and reflection.

Beth now chairs the Isle of Wight’s Standing Advisory Council on Religious Education (SACRE), which agrees the local syllabus for RE in all schools, and she was one of the contributors to the new, locally-agreed syllabus for RE across Hampshire. She also works closely with the person leading on RE in The Bay’s primary school, in a different part of Sandown.

She was living in Sandown herself, but has now moved to Weymouth to be closer to family. But her commitment to the school is such that she travels to and from the island each week.

“It is such a privilege to be doing a job that I love, and talking to young people about the faith that is such an important part of my identity,” she said. “And I’m still learning new things every day about my faith.”

Find out more about our network of church schools here