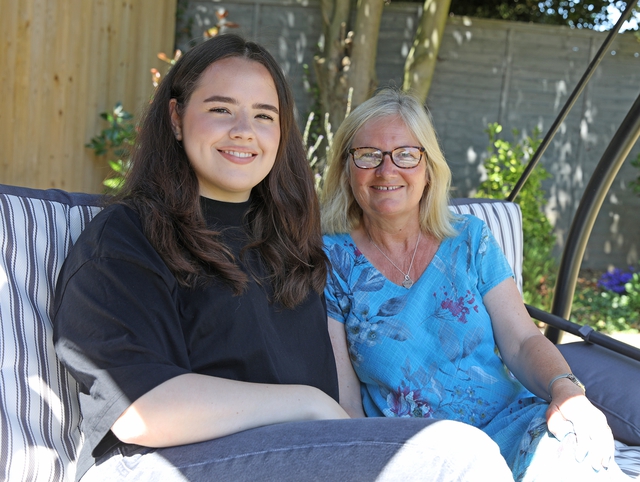 WHEN her flight from Moldova was cancelled, Yelyzaveta Dovzhenko had to think quickly. In the end, she took a six-hour bus journey to an airport in Romania and flew from there instead.

When she arrived in Jane and Paul Cadman’s house, near Lee-on-Solent, she became the first Ukrainian refugee to be welcomed to the UK as part of our diocesan scheme.

Yelyzaveta – now known as Liza for short – is a 22-year-old Masters student who lived with her mother, father, sister, brother-in-law and niece, around 40km away from the Black Sea port of Odessa. Her father and brother-in-law are required to stay in Ukraine to fight the Russian invasion, if needed.

She was matched with Jane and Paul, who live near the beach in Hill Head their son and son’s girlfriend. Although they’ve not known each other long, they already feel part of each other’s families.

“I used to live in Bishop’s Waltham and still receive the town newsletter,” said Jane (pictured above, right, with Liza). “It mentioned this scheme and we registered our interest. We’d seen the coverage of what was happening in Ukraine on the TV and had collected nappies, groceries and so on. But we have a three-bedroomed house and just thought we could offer a room as well.

“We have five adult children. Our spare room is actually our daughter’s who is at university. She does come home sometimes, but she said she’d just sleep on the sofa bed. That shows how supportive the family have been.”

Jane and Liza originally met on a Zoom call organised by Citizens UK, who are our diocesan partners in the scheme to offer homes to Ukrainian refugees fleeing the Russian bombardment. Liza’s flight from Moldova at the end of June was cancelled only hours beforehand. So she took the bus from Odessa to a small airport in Romania instead.

“What is happening in my country is sad, but everyone I have met here has been so friendly and so helpful,” said Liza. “Jane is such a kind person, and she has shown real hospitality by opening up her house to a stranger. That could be really scary, because you don’t know what someone will be like.

“I talk to my family every day, on the phone or by video call. They need to stay in Ukraine because my dad and sister’s husband may be needed. I would like to return there when I can.”

Liza’s Masters is on the subject of Food Technology, and her studies included a placement to a sausage factory in Germany. So she and Jane have already been examining what food is available in our shops and comparing it with what might be eaten in Ukraine.

“I was worried that Liza wouldn’t like our food, but actually she’ll try anything,” said Jane. “In our family, we always sit down together for meals, and it has helped that we all eat together. Liza has been helping us to learn Ukrainian words and we’ve been playing games together. We’ve been learning all sorts of interesting things about each other’s cultures.

“Having a stranger here didn’t worry me. I originally suggested hosting a mother and child, but then realised I could welcome a younger person, as it would be just like having one of our children staying. Lisa’s visa was actually booked in three days, so it all happened quite fast.

“I haven’t overwhelmed Liza by asking her to meet our entire family at the same time, but I do feel as though we are now part of each other’s families. Her family will always be welcome here and I’m sure we could visit her family in Ukraine.

“I’m quite a positive person, so I didn’t overthink or worry too much about it. My advice would be that there’s lots to sort out, but it can wait until the person gets here, and then you can work it out. I do think people come into your life for a reason, so I do think it’s meant to be.”

Could you help to host refugees from Ukraine? Click here for details

More than 70 hosts from across our diocese – churchgoers and non-churchgoers – offered to welcome a total of 179 Ukrainian guests into their homes, as part of our diocesan scheme launched in April. Some have now been matched with Ukrainian refugees either through our diocese's partnership scheme with Citizens UK or through other programmes. Yet, we still have more than 80 applicants waiting to be matched with hosts.

Canon Nick Ralph, our head of mission and social transformation, said: “I’m delighted that so many families who live in our diocese have felt able to offer accommodation to guests from Ukraine, and that several have now arrived and have taken up those offers.

"It’s been a long and time-consuming process to match hosts and guests, and to ensure that all the paperwork and admin is done in all cases. It’s taken a while because we wanted to do things properly in every case, ensuring that we match the right people together and that the right support is in place. We’re really grateful for those who have come forward already, and we’d love to hear from others who would like to make a real difference to the lives of those fleeing from the conflict.”

If you can help please find out more via www.portsmouth.anglican.org/ukraine.