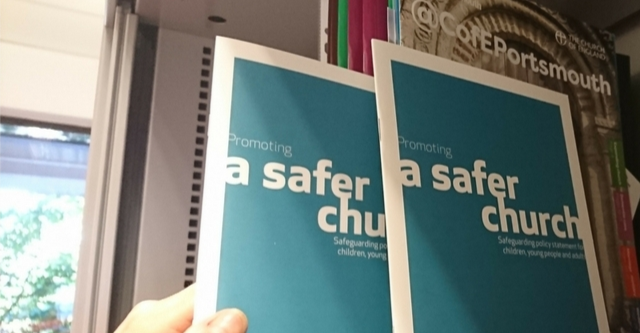 THE most comprehensive safeguarding review in the history of the Diocese of Portsmouth has been completed.

Independent reviewers have sifted through decades of paperwork to help our diocese to deal appropriately with any outstanding safeguarding concerns from previous years.

The comprehensive review of every single personnel file held by the diocese took place from April 2021 until March 2022 – as part of a national project undertaken by the whole Church of England. It was called ‘Past Cases Review 2’ (known as PCR2), as a similar exercise took place in 2007-09.

It took place as the Bishop of Portsmouth committed himself to ensuring that good safeguarding was his top priority.

Four independent reviewers were commissioned to carry out the Past Cases Review 2 (PCR2) in our diocese, because they had backgrounds in the police, social care or public protection, and no previous link with our diocese or Church of England locally.

They were given access to every single past and current personnel file held by the diocese, digital and physical. That meant examining thousands of items of paperwork about clergy, ministers, church officers, paid staff and volunteers working in all C of E churches across south-east Hampshire and the Isle of Wight.

They also met, wrote to, or spoke to some survivors to ask them about their experiences, and to check if they were happy with the diocese’s response – both at the time and since.

And – although this was outside the official scope of the project – they also examined the files of clergy, minsters, staff and church officers who are now deceased. This meant looking at all personnel files that exist, dating back to the creation of our diocese in 1927.

As the independent reviewers discovered any concern that had not been handled appropriately, they raised a specific report about that case, including recommendations for further action. This could range from filing paperwork correctly or updating records, through to liaising with police or statutory agencies regarding potential risk.

In any case where urgent action was needed to minimise any potential risk to children or vulnerable adults, that action was taken as soon as possible. And even where the concern dated from many decades ago and all involved have since died, the reviewers identified lessons that could be learnt.

The independent reviewers also praised elements of good practice and made a number of recommendations for improvement across the diocese. Those recommendations were turned into an urgent action plan that is now being implemented.

Among their most significant observations was the under-resourcing of the diocesan safeguarding team, especially after some posts became vacant in May 2021. Action has already been taken to fill those vacancies and recruit several extra staff for this team.

The full diocesan PCR2 report was submitted to the national Church of England in March 2022. An executive summary was published on the diocesan website today (October 5). It has been published on the same day as a national Church of England report collating Past Cases Review submissions from every C of E diocese. You can read and download that executive summary from www.portsmouth.anglican.org/PCR2.

The full diocesan PCR2 report was also submitted to Portsmouth’s Diocesan Safeguarding Advisory Panel (DSAP), a group that is chaired independently and includes members from external agencies such as the police, social services and a representative of survivors. It is this body which will hold the diocese to account, ensuring it acts on the recommendations made.

Bishop Jonathan said: “As diocesan bishop, my first priority is to preserve good safeguarding practice and to keep people as safe as possible. I want to see the values, practices and priorities embodied in Jesus Christ lived out in the ongoing life of the Christian community.

“I welcome PCR2 and its recommendations. I want to pay tribute in particular to those survivors who worked with us during this process, helping us to shape a more appropriate response to safeguarding concerns.

“This diocese has worked hard in previous years to train those who lead and serve in our Christian communities in good safeguarding practice, recruit safeguarding officers in every parish, and to deal with issues as they arise. Our commitment to excellence in safeguarding practice must now become a permanent part of our culture, our values, thinking and behaviours. In the light of PCR2, we have put an action plan in place and are determined to see good practice implemented at every level.”

Before this PCR2 process began, everyone working with children, young people and vulnerable adults in a Church of England parish in the Diocese of Portsmouth was already being checked via the Disclosure and Barring Service. Every parish already had its own safeguarding officer, and had agreed policies and procedures help keep all those involved in church activities as safe as possible.

The PCR2 report recognised this good practice, as well as our diocese’s support for survivors and its thorough investigation of concerns. Its recommendations for further improvement included better recording of incidents, actions and outcomes; increased knowledge about domestic abuse; and better governance of safeguarding issues.

Kerry Young, the independent chair of the Diocesan Safeguarding Advisory Panel (DSAP), said: “I would like to provide assurance regarding the thoroughness and vigour of the Diocese of Portsmouth review. The PCR2 report includes numerous examples of good practice and recommendations for improvement, some specific to the Diocese of Portsmouth, and some relating to more general, national Church of England matters.

And Kat Friend, operations and engagement manager for Victim Support in Hampshire and the Isle of Wight, is the representative of survivors on our Diocesan Safeguarding Advisory Panel.

She said: “We are pleased that we were invited onto the Panel as an advocate for survivors of abuse and a voice for victims of crime more broadly. Abuse has an overwhelmingly traumatic and destructive impact on the lives of those affected, and should be treated with the utmost sincerity and sensitivity.

“If you’ve experienced abuse or fallen victim to any crime, Victim Support offers free and confidential support whether or not the crime has been reported to the police. Our support line operates 24/7, 365 days a year and can be contacted on 0808 168 9111, alternatively visit www.victimsupport.org.uk.”

If you have information about a safeguarding situation where a child or adult is in immediate danger, or requires immediate attention, call emergency services on 999.

If you need to speak to the diocesan safeguarding team about an issue in a C of E parish in south-east Hampshire and the Isle of Wight, do ring 023 9289 9665 (office hours) or 0303 003 1111 or email safeguarding@portsmouth.anglican.org.