Teaching in church schools is a vocation 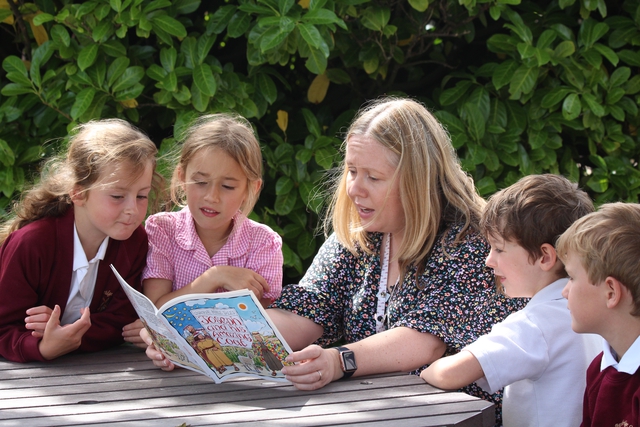 ELIZABETH Chambers remembers her mum, who was a teacher, telling her not to enter the profession. But now that she’s a headteacher, she’d have no hesitation in recommending teaching to her own daughters.

She has been in charge of Bembridge C of E Primary School on the Isle of Wight since September 2021 and really loves the job. It’s her first time working in a Church of England school, and she worried that her lack of Christian commitment might count against her.

In fact, in common with many teachers in our church schools, she’s discovered that the ethos and values of the school are a positive benefit. Many of our teachers would say they felt called to enter the teaching profession, to help make a difference in people’s lives – regardless of their own personal faith. And many Christian teachers would say that it is God who has called them.

“In a primary school, it’s just pure joy,” said Elizabeth. “I’m just overwhelmed by how kind everyone is, and I’ve never been as happy in any job as here.”

Elizabeth’s mother and grand-mother were both teachers, so she understood the commitment involved. Her mum’s warning about not becoming a teacher was more to do with the workload than anything else. Sadly, she died when Elizabeth was 11, so never got to see her daughter follow in her footsteps.

“I was a ski instructor in Italy for three years and one of the weeks involved teaching primary-age children to ski,” she said. “They said I should be a teacher, but I could still remember what my mum had said.So I talked to my dad, and he said that actually she would have been very proud of me.”

After taking a PGCE at Leeds University, her first job was in a junior school in West Yorkshire, where she ultimately became maths lead. She and her husband Ryan had two daughters, Amelia and Matilda, and when the oldest was just about to start school, Ryan’s sister married someone from the Isle of Wight. They visited a few times and decided to move.

Elizabeth became a Year 6 teacher and maths lead at Gurnard Primary School, and then deputy head at Broadlea Primary in Sandown for five years. Just as she left, the school completed its transformation to a school ranked as ‘good’ by Ofsted. She was encouraged to apply for the top job at Bembridge C of E Primary, despite never having worked in a church school before.

“One of the things I was involved with at Broadlea was to develop the vision and values of the school, and that had a real impact there,” she said. “Then when I came here, I discovered that the Christian values of a church school are already in place.

“What really attracted me here was that sense of feeling part of a community. Everything was done with a purpose, with kindness and generosity. It’s also a high-achieving school and I was keen to find out why that is.

“I did wonder if my lack of understanding of faith and Christian practices might offend people, but I was reassured by the diocesan education team and governors that it was OK. And because the Rev Steve Daughtery arrived at Holy Trinity Church at a similar time to me, we’ve been able to develop those links together. His collective worship and the services he leads really show the children the awe and wonder about the Christian faith.

“My own daughter Tilly was in Holy Trinity for the Christmas service. She hadn’t been in a church for a while. The choir was singing, she was looking at the candles, and she cuddled into me because she was so comfortable there.

“We talk about the Christian ethos as a governing body, providing more of a structure for collective worship, so we know why we light a candle at the start, and which Bible stories to tell to reflect our values. We also want to involve the children more in collective worship, so they can write prayer reflections on a wall, and have prayer monitors in each classroom.”

As far as seeing teaching as a vocation, what Elizabeth enjoys is finding new things to do with the children. She was never great at maths herself, so as a maths lead, she was pleased to find new ways to help pupils who were less confident.

“When you have a difficult day, I then try to spend time with the children and remind myself why I got into teaching in the first place,” she said. “There’s nothing quite like seeing the penny drop and a connection made, as they are able to do something they’ve struggled with.

“And I think one thing I’ve found about this community is that everyone is in it together – the staff, the caretaker, the cleaners. We all check how each other is doing, and support each other if things are difficult. Now my daughter is talking about being a teacher. She wants to create a school where every pupil has a bespoke journey and curriculum – where people are able to be what they want to be.I’d have no hesitation in encouraging her – or anyone else – to go into teaching.

“And we’re proud of the decision our family took to come to the island. I drive past Yaverland every day and I have to remind myself that I live in this beautiful place. The initial expense of moving is worth it, for the beaches, for the walks, and for the sense of wellbeing.”

Read about other teachers who feel a sense of vocation