Volunteers to deliver turkeys by e-bike 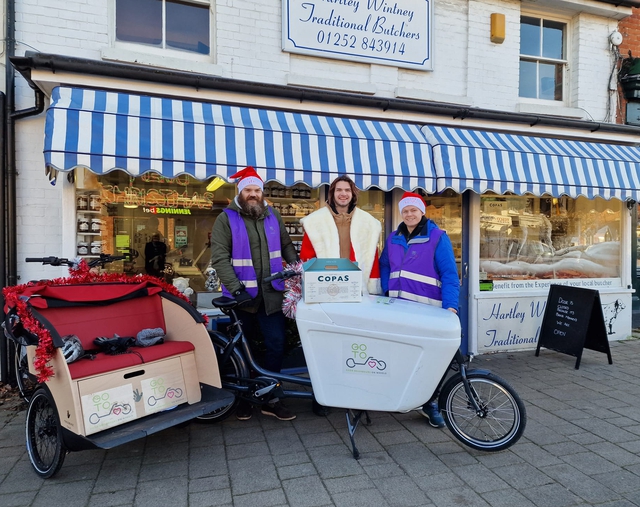 VOLUNTEERS will deliver Christmas turkeys and more to those in need on Hayling Island via e-bike – thanks to an innovative new scheme.

The GOTO project, which enables pioneers and volunteers to deliver essentials such as medicine and warm clothing to local people, has been running in Hayling since October. It was set up through the Good Neighbours Network (GNN), which is based in our diocesan office and supports more than 100 care groups across Hampshire.

The project has trained people to use electric bikes to carry the goods – and sometimes people – around the island, helping them to stay in touch with friends and neighbours, and to receive free deliveries from local shops.

The team joined up with local businesses to organise the delivery of Christmas turkeys to locals during this festive season. In the New Year the pioneers are teaming up with Ruby’s diner and local volunteers to launch a night-time delivery of hot soup and blankets to those on Hayling Island without homes or a regular support network.

Funded by the Department of Transport under a government scheme to tackle loneliness, the initiative is part of a coalition of organisations across Hampshire. Although primarily designed as a local, low-carbon delivery service, the focus on loneliness is very much at the centre of organiser's minds.

GOTO pioneer Louis Coward said: “Loneliness is something people very rarely own up to, butt by making this about delivering essential items it also gives us a chance to keep a friendly eye on people – just to make sure they are ok and have someone to talk to.”

All the volunteers are encouraged to take time to have a chat with people using the service – and even to do the odd small job, if that’s what’s needed. Organisers say these brief conversations can be very informative and the pioneers are taught to signpost to other services as required.

Pioneer Liam, who also runs a bike shop in Portsmouth, said: “Most of the time, people are just glad to have someone to have a chat with and they love the idea of a tri-shaw ride.”

Even though the project has been going for just over a few weeks, it is already drawing praise from participants and wider afield. The help from the Hayling Voluntary Service, the local group supported by the Good Neighbour Network, has been invaluable in getting things off the ground.

The scheme started in Hampshire in October 2022. Hartley Wintney is the second of the three locations to go live. Hayling Island was the first and Emsworth will join in January 2023. It is backed by the Good Neighbours Network, Hampshire’s leading volunteer organisation and operates across the Diocese of Portsmouth, the Diocese of Winchester and the Diocese of Guilford.