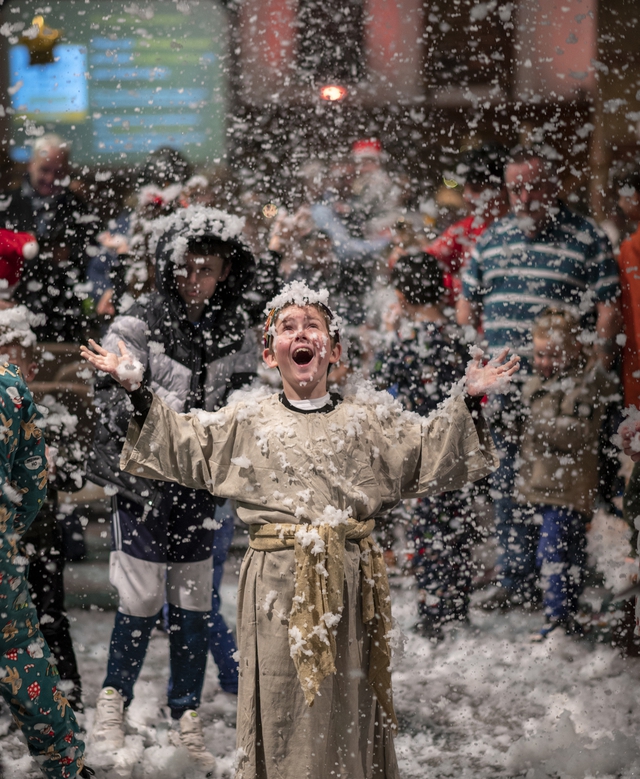 OUR churches have hosted a myriad of carol services as they remembered the birth of Jesus.

Thousands of regular worshippers and visitors of all ages enjoyed Nativities, carol services, crib services and Christmas celebrations in the days leading up to Christmas itself. They recalled afresh the amazing news that God himself chose to come to Earth as a human to become the Saviour of the World.

Among the many services was a Christmas Eve service at St Luke’s Church, Southsea, which included families dressed in Nativity costumes, seasonal refreshments, the chance to hear Christmas stories – and artificial snow falling inside (pictured above). Children and adults alike enjoyed the ‘Carols round the tree’ service.

As in previous years, Portsmouth Cathedral hosted four identical carol services in the days leading up to Christmas, to cope with the demand. Hundreds of people heard the Bible readings telling the story of the Messiah’s birth and sang carols about the incarnation. They remembered the truth of Jesus being the Light of the World as the ancient building was illuminated by candlelight.

Churchwarden David Bacon, from St Jude’s, Southsea, said: “This was one of the best services I’ve ever been to – and I’ve been to thousands!”

St Mary’s Church, Fratton, hosted a carol service to give thanks for the generosity of those in our churches and communities who contributed almost £20,000 to the ‘Comfort and Joy’ campaign, co-ordinated by Churches Homeless Action. It has raised thousands of pounds for those in need in similar campaigns over the past 20 years.

Thank you to all those who donated gift vouchers, so that the homeless, victims of domestic abuse, vulnerable families and asylum seekers can buy Christmas presents. The agencies who will distribute those vouchers gathered at St Mary’s on December 16 to receive them.

At St Margaret’s Church in Southsea, children recreated the timeless Nativity story with a ‘no-rehearsal’ performance. They came dressed as characters from the Nativity story and joined the scene as they were called. And the entire congregation joined in.

The church also collected hundreds of donations from the community to help those in need. For the third year in a row, they handed out those donations as ‘Hampers of Hope’ to those in their parish community who might otherwise go without at Christmas.

Nearby St Simon’s Church, Southsea, welcomed a real donkey into church for their Crib Services on Christmas Eve. The donkey not only helped them to tell the story of the birth of Jesus, it also fertilised their flower beds!

Over at St Faith’s Church, Lee-on-Solent, vicar the Rev Paul Chamberlain dressed as a Christingle himself as he introduced the Christingle service. The costume included the orange, ribbon, candle and cocktail sticks, each of which symbolises an aspect of the fact that Jesus is the Light of the World.

Christingle services are often held to raise money for The Children’s Society, a national children's charity that originally sprung out of the Church of England. Bishop Jonathan’s Christmas messages this year included a recommendation – in the pages of local newspapers – that readers should explore the work of The Children’s Society, as it echoes the priorities of the Christ-child.

He said: “This charity offers us a doorway into the presence, company, and priorities of Mary’s child, Jesus. For at Christmas we celebrate an unexpected discovery: that is, the discovery of God in littleness and vulnerability. When the living God is revealed to the world, both then and now, revelation occurs at the edge or margin, rather than within the political or cultural mainstream.

“It is in the birth of Mary’s Little One, Jesus, that Christians – throughout time and within almost every culture and society on earth – discover hope, new priorities and a sense of meaning and purpose nothing else in this world can give.

“To put it in another way, there is a pattern which can be traced, then followed up, in the story of Christmas. One great writer on the Christian life described God as a ‘beckoning word’. It was a beautiful, simple picture of God – through Jesus Christ – inviting and insistently drawing us to join him where he waits for us.

“And where is Jesus Christ found? Where does he wait? Among the little ones of society; the broken; the vulnerable; those who know their need of forgiveness; with the left behind and among those out of sight or on the edge of our awareness or expectation.

“We can welcome the Christ child in any context, at any time in our lives. The Christmas carol provides us with a prayer we can offer ourselves: “O Holy Child of Bethlehem, descend to us we pray . . . cast out our sin and enter in, Be born in us today.”

“But it can take a moment of revelation, a shift in awareness to recognise and to receive the living God in this unexpected Child, born under occupation and who will grow to be crucified as a rebel on the edge of empire. I believe ten minutes with The Children’s Society can start such a shift and can begin such a revelation. Happy Christmas!”

Bishop Jonathan also recorded a Christmas message for those worshipping in our diocese, which you can see below: