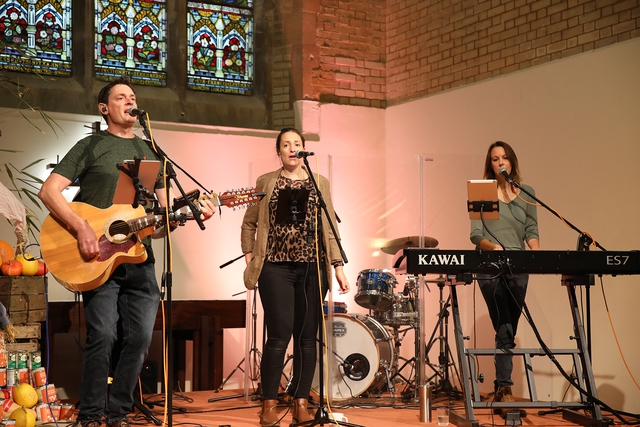 WALK into many of our churches on a Sunday and you’ll see microphones, guitars, keyboards and a drum kit near the front.

Worship groups composed of talented musicians and vocalists use them to help our congregations engage with God – leading them in lively praise and contemplative worship. The musical style can be anything from folk to hard rock.

Such groups have been a part of church life for several decades, developing alongside a network of contemporary songwriters and popular Christian festivals.

It’s tempting to make a big distinction between traditional hymns – often led by organs and choirs – and more modern songs, but many of our churches actually feature both. Sometimes both styles feature in the same service, sometimes they are separate.

Matt Lockwood is worship pastor for Crofton parish, and also leads a network of worship leaders called 631 – based on Psalm 63:1 – who meet to share expertise. (Click here for more details of this group)

He said: “It can be easy to think of worship as just something you turn up to and sing along with, but there’s more – seen and unseen – that’s going on. We partake in something bigger than ourselves in worship, greater than our own preferences or opinions.

“There’s an agreement and co-operation, not just physically where we are gathered, but spiritually with heavenly worship and praise. Worship transcends time, language, location, even personal theology.

“As a worship leader I look to use songs that connect not only with our congregation but also our wider community – it’s important there is authenticity in how we worship, and the songs we use reflect that in language and style. In fact, all that we do as a worship team is built around helping people worship.”

Pauline Gennings came from Holy Rood, Stubbington, to help create a more informal Sunday morning service at St Mary’s, Portchester. The 11.30am service – called the ‘Later Service’ – began as a monthly event in 2018 and became weekly in 2019. Worship is led by a band playing keyboard, guitars and drums, alongside amplified singers.

“It has been so exciting to be part of something new, such as putting together a service and a worship band from scratch,” she said. “We appealed for people to join in and about 14 or 15 people turned up. We started monthly, but realised that it was difficult to retain people if we only met once a month.

“We rehearse on a Wednesday evening, and are still gradually introducing new songs. A couple of us can actually lead the group, so we take it in turns. We can, of course, still play more traditional hymns as a worship band, but we might play them in a different way.

“It’s gone down very well, and the service has grown. We were attracting younger families to this service, so we moved our children’s work from the more traditional service to this one. But it’s not just younger people who come. And because we’re in the middle of Portchester Castle, sometimes tourists who are visiting will hear us and look in!

“There is a certain amount of crossover between the 9.30am Eucharist and the 11.30am Later Service congregations. I’m certainly very happy there, knowing I’m in the right place.”

There are also two Sunday services at St John’s Church, Locks Heath, where the 9.30am Common Worship service with organ and choir is followed by an 11am Informal Service with a worship band. There are similar numbers at each. A few attend both, and there are some joint services.

Worship leader Paul Barrow said: “We used to have a service – called The Happening – in the church hall at the same time as the 9.30am service, but the only way to expand it was to meet in the church itself. The worship band tends to include guitars, keyboards and drums – whoever happens to be around.

“We don’t have enough people to have more than one band, but our musicians are a range of ages, and all are experienced. There are four worship leaders, so the workload is shared out.

“We think it is important for the musicians to rehearse, and we tailor our songs to the theme of the readings and sermon on the Sunday. The 11am service is the one that our children and families tend to come to, and we do have the occasional hymn and songs with a younger focus. We do like to introduce new songs, although a recent survey suggested we were doing too many! It is important to get the balance right.

“And when we do joint services for Harvest, Remembrance and so on, which might involve both traditional hymns and more modern worship songs, we try to plan them as a hybrid team. That means the worship group and the choir working together, which for us seems to work successfully.”

Andrew Day, Director of Music at St Paul’s, Barton, on the Isle of Wight, feels that any tension between traditional and modern worship styles has dissipated – they went through that transition decades ago.

“When I became Director of Music here in the second half of the 1990s, we had more of a ‘hymn/song sandwich’ kind of service, and we introduced a block of worship songs,” he said. “It was a challenge to start with, but now that’s part of our DNA.

“A series of worship songs gives people the chance to really engage with the Lord and listen to his voice. I know that, as lead worshipers, we have to resist the temptation to think that our ‘worship time’ is just when we sing – we worship God in the rest of the service and in our day-to-day lives.”

The St Paul’s band includes Andrew, who plays the keyboard, his wife Liz on the bass, his sister Jude on the piano and Tom on drums. Andrew and Liz share lead vocals with Jude and Tom providing harmonies.

They’ve been leading worship together for so long that if they haven’t had time to rehearse, they can just to turn up and play.

“If we’re singing a new song, we send a Youtube link to the musicians, and provide lead sheets, and Liz and I practice at home,” he said.

“But we’ve been working as a team for so long that we can ad lib the music a little. We don’t have a big playlist, but we do sometimes retire a song because it’s a bit tired, and introduce something new.

“I’m not that comfortable with the model of having the band at the front, as it’s God we are worshipping. We tend to be to the side. And although we’re happy for new members to join the band, it’s good for them to become part of the regular congregation first.

“We don’t really see any tension between traditional and modern styles. I play the organ as well, so I cover both. And everyone coming to our services seems to know what they’re going to get, and are comfortable with the hymns and songs that we sing.

“I don’t think it’s style of worship itself that attracts new and younger people – I think the Word and the Spirit go hand-in-hand to draw people in.”

Read our feature on parish choirs from 2019 here
To read more about using music in worship, click here