Music is led from within the congregation at this church 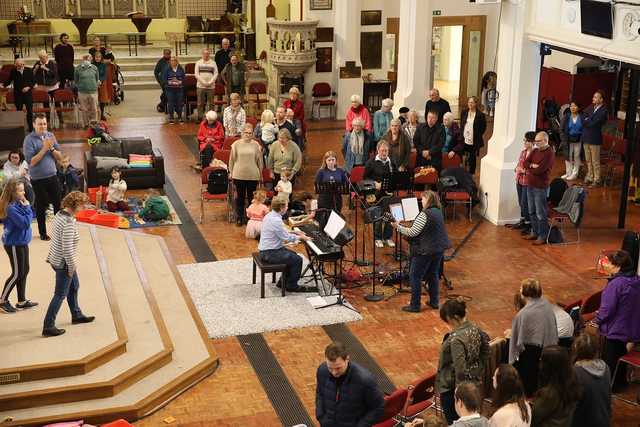 A RECENT change at St Jude’s Church, Southsea, is to place the worship group within the congregation itself – rather than at the front.

It’s designed to show that the musicians are not supposed to be the focus during worship – their role is also to worship God alongside the congregation.

The keyboard player, guitarists, drummer and singers are placed in the middle of the nave, with chairs arranged in a V-shape around them.

The vicar, the Rev Adam Tams, plays keyboards and is one of the regular worship leaders. He consulted other musicians about the change before it happened.

“The team concluded that we were struggling to engage people, especially those who were further away from the band,” he said. “Some of the band weren’t keen for us to be upfront, so we decided to place them in the centre of everyone. That allows the focus to be on the cross, as people look to the front.

“We are astounded by the difference it has made. It also meant the musicians can be in a circle looking at each other, allowing them to be more responsive to the Spirit as they can see each other and the congregation.”

Adam also believes in the value of contemporary worship songs – not necessarily because he thinks they’ll appeal to younger people, but because they can allow churchgoers to focus on their relationship with God.

“I believe it’s really important spiritually for us to meet under the banner of worshipping God, and sung worship can engage every part of us,” he said.

“Hymns are often a great way for us to exhort theological truths, and I love singing them. When my wife Jess and I went through a tough time with a miscarriage, it was traditional hymns and liturgy that we went to.

“But repeating certain phrases – whether it is meditating on Scripture, singing Taize chants, using liturgy, or singing a worship song – does allow me to engage with God in a more intimate way. You’re thinking less about what the next line is, and more about the meaning.

“I’m not a very good musician. When I lead it tends to be more reflective, as I’m leading from the piano and it’s harder to be upbeat without a full band. We did have a paid worship leader, who we chose not to replace, but it’s not a bad thing for the vicar to model what worship might look like in a very visible way.

“There can be a tension between traditional and modern worship, but it’s not always what you expect. We have half a dozen students who come to our 9am traditional service, rather than the 7pm one we specifically created for that age group. That’s challenged my thinking.

“The reality is that we all experience worship differently, and all a worship leader can do is to try to make it as authentic as possible for those gathered in the church that day.”

Read more about the use of music in worship here