Campaigners and professionals considered how to combat modern slavery 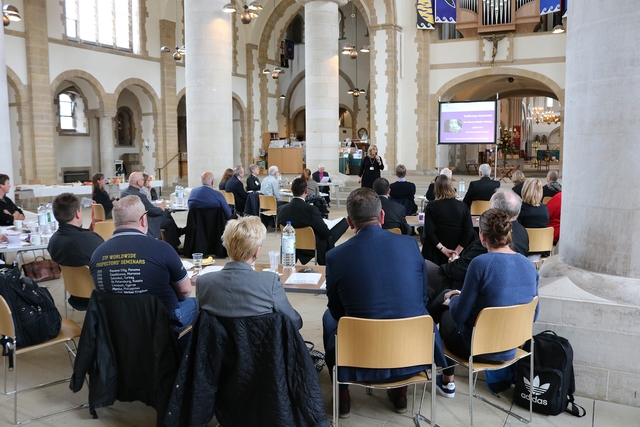 CAMPAIGNERS and professionals gathered in our cathedral to consider how to combat modern slavery.

Our diocese hosted an event specifically examining exploitation in the shipping industry. Delegates were able to network over lunch, learn about the problem and discuss their response in potential real-life scenarios.

Among those who attended were representatives from campaign groups, professional bodies and Christian charities working in this field.

The seminar was led by Lysbeth Ford, partnership development manager for the Gangmasters and Labour Abuse Authority. She explained the significance of the 2015 Modern Slavery Act, the difference between trafficking and smuggling, and some of the factors that make people vulnerable to trafficking.

In 2015, there were between 11,000 and 13,000 potential victims of trafficking in the UK. Those working in mobile car washes, nail bars, fruit farms and in port construction were more likely to have been trafficked.

Typically, someone might be approached in their own country and enticed to come to the UK for work. But the person bringing them might confiscate their passport, insist on payment from their wages for travel and rent, and threaten to report them to the authorities unless they comply.

“Behind exploitation and forced labour sits criminal activity,” said Lys. “Modern slavery is a high profit and low risk business. Sometimes the person doesn’t even know they are a victim.

“However, Theresa May pushed through the Modern Slavery Act in 2015, which consolidated existing legislation, increased sentences to potential life imprisonment, and strengthened law enforcement at sea. All UK businesses with a turnover of more than £36m will also have to put on record what they are doing to combat slavery and human trafficking.”

Among those attending was Jodie Meakin, a volunteer with Stop The Traffik Portmouth. She said: “It’s all about raising awareness, and the shipping industry isn’t something I knew a huge amount about, so it’s good to meet people and hear more.”

And Robert Greenwood, from the National Federation of Fishermen’s Organisations, said: “People are rarely exploited in the European fishing industry. But we do hear of people who may have been mistreated in their previous jobs, and can alert the authorities.”

There was a clear commitment from those agencies present to ensure that this aspect of labour exploitation is addressed by the Hampshire and Isle of Wight Modern Slavery Partnership.

This training event in our cathedral came a week before the national launch of The Clewer Initiative, the Church of England’s response to the issue of modern slavery.

Our diocese is one of those piloting this work, which involves dioceses and churches developing strategies for detecting modern slavery in our communities.

Click here for more photos from the training day.

Find out more about our response to modern slavery