Worshippers club together to buy house for refugee family 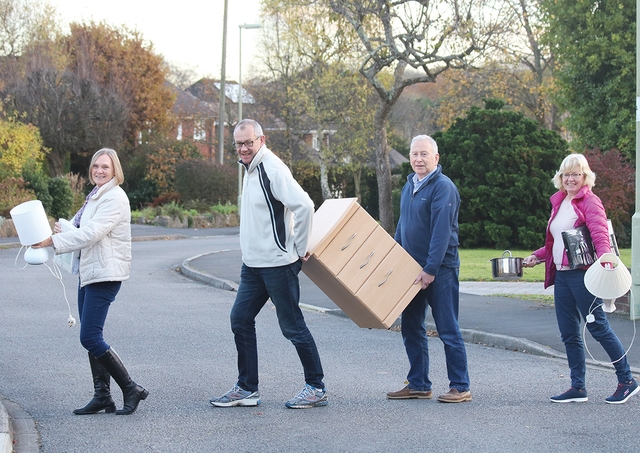 Worshippers from St John's, Rowlands Castle, with some of the furniture for the house they've bought for vulnerable people

CHURCHGOERS from Rowlands Castle joined forces to buy a house to help the vulnerable, including refugees.

Twelve worshippers clubbed together to pay for a three-bedroomed house, which will initially be rented out to a family who have escaped from the conflict in Syria.

They were inspired after a series of sermons looking at what the Bible says about Christian mission, helping those in need, including refugees. Worshippers have been decorating the house, donating furniture and organising befrienders ahead of the family’s arrival in the New Year.

Project lead Terry Monahan, who is also a Reader at the church, said: “Our vicar and ministry team were inspired by the Diocesan Conference in 2015 to do something practical to assist with the refugee crisis in response to the call we felt to mission.

“Soon after, my wife Mandy went to a session at Spring Harvest led by Hope Into Action, which encourages churches to provide houses for the homeless, supporting them to reintegrate them back into society.

“We felt that the economic model could work here, in that we’re not asking people to donate money, but simply to transfer their savings into property. They would own an asset, and also receive a rental income.

“Although we are a generous church in terms of giving money to other charities, which we still maintain, we thought it would be good to encourage face-to-face interaction with those in need. We had a series of sermons on what the Bible says about refugees, and about 30 people came forward offering money, friendship, prayer and skills.

“Twelve individuals invested in the house, offering anything between £5,000 and £70,000. The money came from their personal redundancy payments, retirement lump sums or savings – none of it came from the church itself.

“We found a suitable house, bought it, and received the keys in October. It needed some structural work by professionals, but volunteers have done the DIY.

“We offered the house to be part of the government’s Syrian Vulnerable Persons’ Resettlement Scheme, and quickly heard about a potential family – mum, dad and three children. We hope they’ll be moving in in the New Year.

“We were confident that people at St John’s would respond to this, and in some cases their attitudes towards refugees has changed by 180 degrees. We also think other churches could do something similar.”

Mission Possible is supported by the PCC, the Rural Refugee Network based in Petersfield, and Hope Into Action. They hold weekly prayer meetings, and members of the group have specific responsibilities – for the legal side, the finances, decorating, furnishing and befriending.

The group have committed themselves to the project for five years, after which they will review the arrangement. They’ll support this particular refugee family for two years, until they can become independent. The house will then be made available for another needy family.

The government’s Syrian Vulnerable Persons’ Resettlement Scheme aims to rehouse 20,000 refugees by 2020. But it requires private landlords to offer their homes, as local authority and social housing cannot be used.