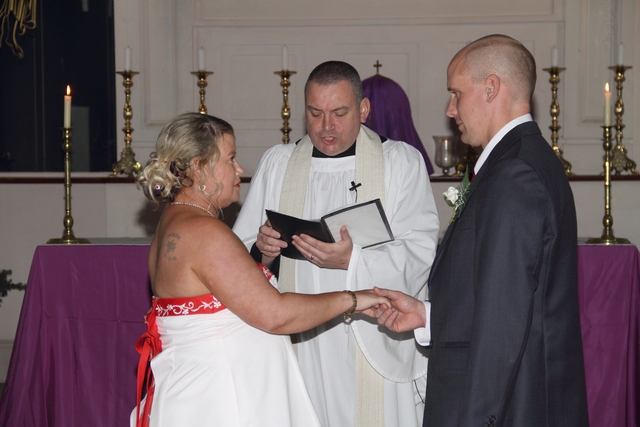 WHEN Lee and Jez Wickenden got married, there was only one possible choice for their wedding venue.

St Michael’s Church in Paulsgrove was the church Lee went to as a child – and where she returned to become a regular member of the congregation in 2012. It was important for her to make her vows to Jez before God.

The pair will be just one of the married couples who will be remembering their special day at the church’s Michaelmas Fair on September 28. The church is inviting anyone who was married at St Michael’s to bring their wedding photos to share with others over coffee.

Lee and Jez’s photos from 2015 will be on display, along with many others, and visitors will have the chance to compare wedding fashions and hairstyles over the years.

The vicar, the Rev Ian Newton, is also interested in finding out who has moved furthest away from the church since getting married at St Michael’s.

Lee, who is 44, said: “I met Jez when he came to work on my garden a few times. One day, he came to work on the garden and never left! Then a month later, I called everybody to come round, then I proposed to him, and he said yes!

“We organised the wedding very quickly – we were only engaged for six months. It was a Christmas wedding in 2015, and I was given away by a neighbour and my father-in-law.

“It was the church I’d been to with my mum as a child, but she had passed away. I then stopped believing for a while, but church people felt like part of my family and I wanted to go back. I started coming regularly in 2012 and have been ever since.

“I would recommend St Michael’s and Father Ian to anyone else who wanted to get married. He came round and explained everything to Jez and I, and I couldn’t thank him enough.”

Any married couples that would like to attend can just turn up. But for more information, please call the Rev Ian Newton on 023-9237 8194.

To find out more about getting married in church, click here.