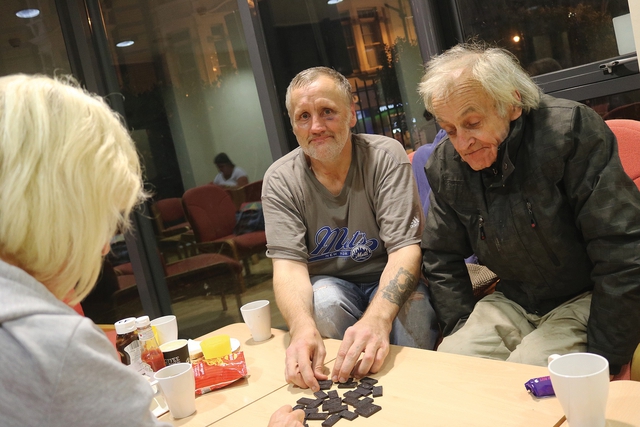 IT’S late on a Friday night and the church’s entrance is brightly lit. You can see people chatting happily inside – and you can smell the bacon being cooked.

Pop inside and you’ll be welcomed with coffee, bacon sandwiches and cheese toasties. Join others playing dominoes or board games, or catching up. There’s also a chance to spend a few minutes studying the Bible and talking about faith.

This is Friday Fridge, based at St Jude’s Church, Southsea, which has just celebrated its 13th birthday.

It was originally set up to cater for those leaving pubs and clubs, offering a spiritual chillout to those unlikely to engage with church on a Sunday. It opened from 10.30pm until 2.30am on Friday nights, with ambient music, thought-provoking projections and creative prayer stations.

But as local pubs and clubs began to close down, it started to cater for a different audience – often those on the margins of society, including those living with addictions, mental health issues, homelessness or loneliness.

Whereas before there might be an entirely different set of guests each week, now it caters for a fairly regular clientele. Its opening times also shifted to 9pm-11pm, on the first, second and third Fridays of each month.

Its leader, Jim Campbell, said: “We are open to absolutely anyone who is around late on a Friday night, so in practice that often means those who don’t necessarily have anywhere else to be.

“We are very happy to offer food and drinks and to chat with no strings attached. But if someone wants to talk about faith or say a prayer, our volunteers can help them to do so.

“Recently we have had a few people who wanted to study the Bible, so we were happy to set up a group doing that during our regular sessions."

One regular, Dave Davis, was confirmed in our cathedral by Bishop Christopher on November 23 after attending both Friday Fridge and Sunday Suppers in nearby St Simon’s Church. He also met the vicar of St Simon’s, the Rev Andy Finn, regularly to help him prepare him for confirmation.

“I used to go to church as a kid, and I was baptised,” he said. “I stopped going when I was 10 or 11. I started going to Sunday Suppers about three years ago, and I was interested in getting confirmed. I study the Bible as an audio book.”

If you’d like to volunteer to help at Friday Fridge, please contact St Jude’s parish office on 023-9275 0442 or office@sjs.church.

Find out more about our churches' response to homelessness