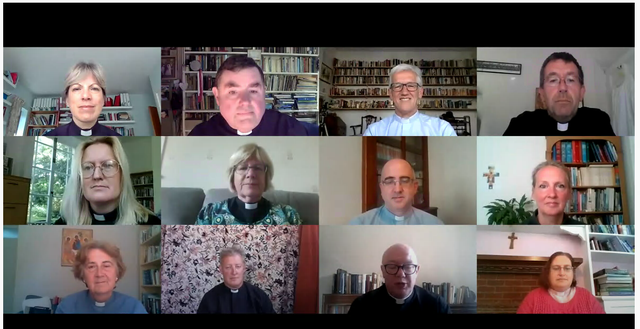 CLERGY from across Portsmouth have recorded a specially-written prayer for those who make sacrifices in wartime – as the city marks the 75th anniversary of VE Day.

The Church of England clergy recorded the ‘Prayer for Portsmouth’ digitally via Zoom video conferencing, and released it onto Youtube ahead of the anniversary..

The prayer was written by the Rev Hugo Deadman, curate of St James Church, Milton, using words that would resonate with those who live and work in the city. He’ll be using it in an online VE Day service he’ll be leading at 11am on Friday 8 May to mark the anniversary.

It has been posted onto Youtube and can be seen here:

The full text of the prayer is:

Heavenly Father, we remember with gratitude the sacrifices of those who lived and worked in this front-line city.

We lay before you everyone in our communities whose lives have been darkened by conflict, who endured hardship, who cared for the sick and wounded and frightened, who travelled from our shores to advance freedom, justice and peace for the world, entrusting to your loving care those who did not return. And those who stand still in war’s shadow.

Comfort and heal them. Help them to stand once more in the light. May your love chime in our hearts and in our lives. May we, the people of this island city, affirm anew that no one is an island entire of themselves, but a part of the main.

And may we always be guided by heaven’s light - and so sail towards your eternal city, the new Jerusalem.

This we ask in the name of the one who is the prince of peace, our one true overlord, Jesus Christ.