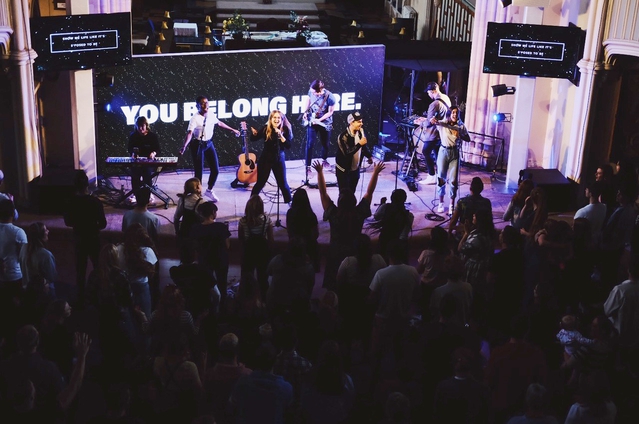 PORTSMOUTH’S largest church has grown so much that it will create its own daughter church in Cardiff later this year.

Harbour Church began in September 2016 with just 20 people, and now welcomes 700 worshippers every Sunday to three different locations. It now plans to send a team of 40 people to Cardiff to set up a brand new church there from September.

It will be called Citizen Church and will be based at St Teilo’s Church in the Cathays area of Cardiff. The 40-strong team includes 10 worshippers who already live there, a family moving from Brazil, some moving from London, and 17 worshippers who will relocate from Harbour Church in Portsmouth. It will be led by the Rev Ryan Forey, currently curate at Harbour Church.

That team will be commissioned for its new role at a digital service on Sunday 24 May. Bishop Christopher has recorded a video message to be played as part of the service, expressing his joy at the move.

Among the group relocating is Bethany Pearson, who was one of the team that originally moved from St Peter’s Church, Brighton, to set up Harbour Church in 2016. Harbour Church was specifically created to appeal to students and young people, and its 700-strong congregation has an average of 26.

Bethany, 27, said: “I moved from Brighton because I felt God calling me to Portsmouth to help start this new church. I’d been a student in Brighton, where I’d dropped out of my course because of illness. But God had healed me of that chronic fatigue syndrome, and I felt there was a reason he healed me.

“Being part of the original team creating Harbour Church and seeing it grow and serve this community has been really exciting. Harbour has become ‘home’ for so many people. I’ve been on the volunteer café team, co-ordinated Alpha, looked after the intern programme and co-ordinated Sunday worship in that time. And in September 2019, I was approved to start training to become an ordained minister.

“So now it’s exciting to feel called to go to a place where there are 80,000 students, where we can create a new church all over again, and where I’ll be part of the staff team. I’ll be training alongside working at Citizen Church for the next three years.”

Another Harbour Church worshipper who will be making the move is Abbie Palmer, 21, who is completing her theatre studies degree before moving. She’ll be the new children’s worker at Citizen Church - alongside her boyfriend Dan, who will work with students.

“When I moved to the University of Chichester, I was looking for a student church that pushed my faith and encouraged me to dig deeper in my relationship with Jesus,” she said. “Dan had been going to Harbour for a year, and I already knew it was incredible there, and I wanted to be part of that.

“I spent summer 2019 performing with the Flying Seagull Project, touring the UK festivals to offer kids’ entertainment. I had always loved kids’ work, but never realised it brought me such joy and a feeling of purpose. At the ‘Focus’ conference, the children opened my eyes to seeing the world how I used to, filled with love and kindness. I felt God calling me to a leadership role.

“I am excited to become a part of the movement happening already in Cardiff, and to be in a team of such passionate people. I want God to use my creativity and enthusiasm to be a part of bringing children and families to him. Children's church is where it all started for me, so I know how important the early stages of life are in contributing to a firm foundation in Christ!”

St Peter’s Church in Brighton, Harbour Church and Citizen Church in Cardiff are all part of the network run by Holy Trinity Brompton (HTB), which has pioneered the use of ‘church-planting’. St Peter’s was itself created as a daughter church of Holy Trinity Brompton in 2009. Citizen Church and a similar church plant in Wrexham this year will be the first churches the HTB network have planted in Wales.

In the past four years, Harbour Church has led Alpha courses, run a Foodbank which is feeding the hungry during the current pandemic, supported the victims of domestic abuse and developed its ministry to students. It has been an integral part of the Diocese of Portsmouth’s strategy that aims to inspire churches to grow in the depth of their discipleship, their impact in serving others, and in numbers of worshippers.

The Bishop of Portsmouth, the Rt Rev Christopher Foster, said: “Harbour Church, which is now a flourishing part of our mission and ministry in Portsmouth, began just a few years ago as a gift from Brighton, when the Rev Alex Wood and the team came to serve Jesus among us here.

“Now Harbour and Portsmouth diocese are delighted to gift Ryan and a team to Cardiff. Christians believe in sending people from one place to another to do God’s work – we are an ‘apostolic’ Church. And it is the mark of a church to be ready to gift and send out people to do mission, in their local setting and beyond.”

You can watch the commissioning service for the team who will create Citizen Church on www.facebook.com/harbourchurchportsmouth, from 10.30am on Sunday 24 May.