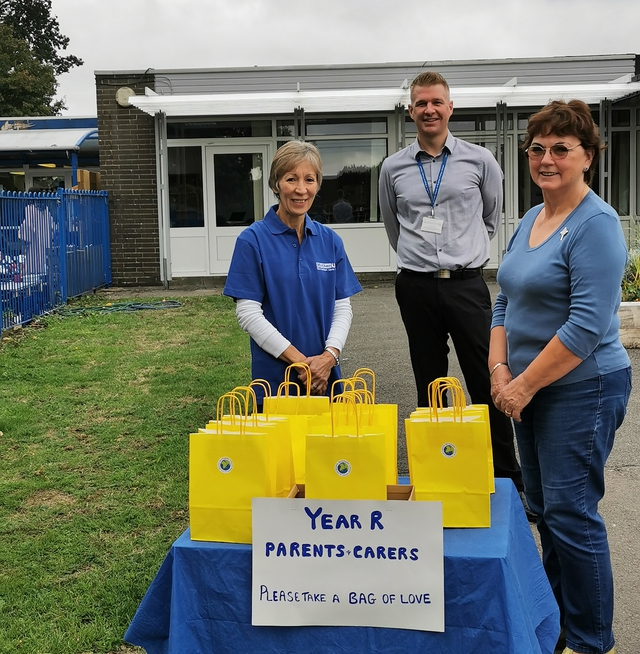 PARENTS dropping their children off for their first day at two local C of E schools were given a lovely surprise.

The bags included some treats and goodies to help them with the emotion of the big day. Each included a greeting, a packet of tissues, a bar of chocolate, a tea bag and a prayer card as well as a posy of flowers.

It was at the national conference of the Mothers’ Union held in Portsmouth in September 2019 that those from the Wickham and Sheffield branches heard about the concept for the first time. It was an initiative started by MU members in the Diocese of Liverpool.

Members of the Wickham and Shedfield branches decided at their AGMs that they’d like to do something similar. Despite the difficulties caused by the pandemic, a few members from each branch got together to organise the project, and many more gave practical help.

Mothers’ Union member Sabrina Gwynn said: “It was an emotional experience for all of us. The parents were surprised and grateful for the thoughtfulness of the unexpected gift, and we were delighted at their happy response.

“We are grateful to the headteachers of both schools for engaging with us in this project and to the ministry team in the benefice for their encouragement and support. Later responses on social media, from both parents and the wider community, proved what a worthwhile undertaking this had been. We are all agreed that ‘Bags of Love’ will be repeated.”

And one of the mums, Jo, said: “I was one of the mums who received one of your wonderful ‘Bags of Love’ this morning. What a fabulous and thoughtful idea. Thank you very much! It made my day and made such a difference to how I was feeling when I dropped our youngest off for her first day at school.”

For details about the work of the Mothers’ Union in our diocese, click here