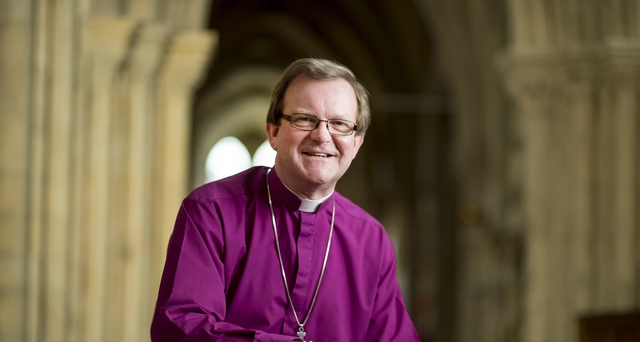 BISHOP Christopher used his farewell speech in the House of Lords to call for more action to help those hit hardest by the pandemic.

He was taking part in a debate on the Queen’s Speech, in which the government lays out its legislative programme for the next session of Parliament. He questioned whether the government would be able to achieve its aim of ‘levelling up’ of opportunities for all in the measures announced so far. It was his final contribution in the House of Lords after seven years on its benches, and three weeks after his official retirement.

He started his speech by referring to his farewell service in our cathedral on April 24, mentioning the singing of his favourite hymn,There’s a Wideness in God’s Mercy, which praises God’s gentleness, mercy and justice, as well as his radical inclusion. It led him to consider the government’s plans in that context.

“I am interested, not a little intrigued by the Government’s talk of levelling up,” he said. “The phrase suggests that those who already have will not have to give anything up, and that those who need a hand-up will be propelled upwards by … well, my Lords, that is the question. How does the rhetoric become the reality? That is a dilemma that the Christian church understands; we proclaim the Kingdom but find building it challenging.

“Much of what a Government does, does not depend on the contents of its legislative programme, but it is the flesh on the bones of the grand narrative it tells – and levelling up does provide a very grand narrative indeed.

“That is against the backdrop of an economic situation that remains uncertain. Last week’s bullish briefing suggested that the economy will grow back quicker than ever before. That, my Lords, is true – up to a point. But if we grow back 7.5 per cent after a drop of towards 10 per cent then we are still, in the book of this former economist at least, very much still behind.

“Who benefits from the growth will be critical. After the 2008 crash it was those at the sharp end who suffered most – while those responsible for the crisis walked away with barely a scratch.

“The Diocese of Portsmouth has many at the sharpest point of the sharp end. The third of children on the Isle of Wight living in poverty; that is 7,000 children on the Island whose lives and life chances are being blighted. Or the people of Charles Dickens Ward in Portsmouth itself – which has the misfortune to be in the one per cent of most deprived wards in the country, with many struggling with the iniquities of universal credit.

“I find myself asking what in the programme will benefit them – not least since their lives, already far from easy, have been hit hard by the pandemic. I fear I can see not much, worthy though many measures are.

“I find myself, first, regretting the continuing absence of anything meaningful on social care – a decade on from Dilnot, and still no time scale for action. This is a crisis that we just cannot consign to the long grass – again. Surely the urgency is even clearer post pandemic. To tease vulnerable and elderly people saying there’s a plan, ready or perhaps not, or putting off action is cruel.

“I am astonished that, with a focus on levelling up, there is nothing intended to address the injustices of those employed in the gig economy or under the pressures of zero hours contracts. I cannot imagine we can achieve levelling up without improving the working circumstances that so diminish wellbeing for many. To claim that the pandemic demands delay is evasive if there is truly commitment to levelling up.

“Lifelong learning is indeed a laudable ambition, but does the Government really think that the hard pressed working families in the diocese I serve, just about keeping their heads above water by having three or four jobs, can afford the time to re-train or carry the burden of a loan to do so. What the Speech proclaims is hopeful but the signs that these measures will deliver are scanty.”

He ended his speech by praising the people of south-east Hampshire and the Isle of Wight, who he served as bishop from 2010 to 2021.

“My thanks to the people of the Diocese of Portsmouth,” he said. “A Diocese of great diversity, but nonetheless a people of a very distinct identity and culture. I may not be Portsmouth till I die, as they will soon sing again at Fratton Park, but I hope I have spoken for them, for their God – and for the wideness of his mercy.”

Bishop Christopher was praised by Lord Griffiths of Burry Port, who said: “My Lords, what an honour it is to be given the opportunity to address a word on behalf of all noble Lords to the right reverend Prelate the Bishop of Portsmouth – the ex-Bishop of Portsmouth, as he takes his leave from us today.

“I would like to use the occasion to give voice to an instruction John Wesley gave to all Methodists in his day and to all sensible people thereafter. Speaking of the responsibility that goes with faith to address the plight of the poor and oppressed, he urged his followers: ‘Go not to those who need you but to those who need you most.’

“It seems to me that Bishop Christopher has done just that, both in the diocese where he has been revered for his pastoral skills and in the proceedings of this House, as we have just heard, where he has consistently striven to highlight the lot of the poorest people in our land.

“In saying farewell in our customary way, therefore, I would like our “Hear, hear” to carry the tones of a commitment on our part to continue to fight the good fight that has mattered so much to the right reverend Prelate. I hope noble Lords will forgive me if I end this adieu by flaunting convention and changing from the third person to the second as I say: ‘Well done, thou good and faithful servant’.”