Emotional scenes as new building opens as church and school 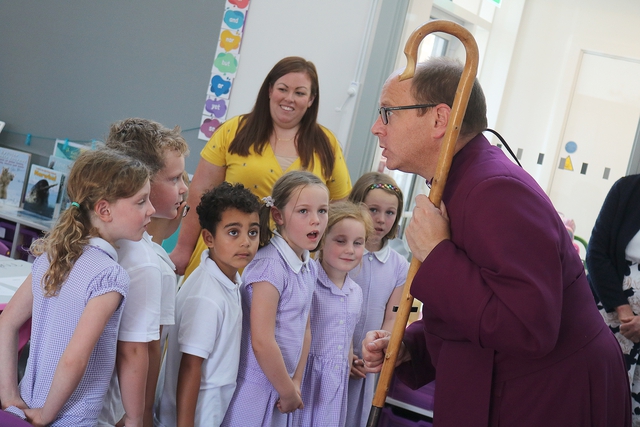 THERE were emotional scenes as a brand new C of E school opened in Whiteley – in a building that will also provide a base for the church.

Bishop Rob Wickham, our commissary bishop, officially opened the new Cornerstone C of E Primary School on the first day it welcomed pupils back after the summer. Parents dropping off their children were excited to see the enlarged, purpose-built school, after eight years in a temporary location.

And there were tears too from Whiteley Church congregation members as they celebrated their first permanent building since the church was originally created in 1995. After years of meeting in people’s homes, the community centre and online, they finally have somewhere they can call home. Bishop Rob dedicated the chapel and blessed its future use.

Mum Joanne Haddock, whose eight-year-old daughter Gracie goes to the school said: “It is beautiful – they’ve designed it really well. Our oldest went to to school in the Portakabins and this has so much more space, it has the outdoor areas, the food technology areas, and they can all fit into the hall now. The facilities are so much better. It's also the first time that the school has been close enough for us to to walk to.”

And Sally Hobbs, whose children William, 8, and Violet, 4, are pupils said: “It does look amazing, and so much better than the old school. I think this school will help to bring everyone together in this area, because it is like family.”

Pupil Eden Spray, aged 10, said: “This building is really cool. I like the new Learning Hub and the food technology room. It’s really good to listen to the bishop and it’s cool that he’s come here.”

The £12m building in Bluebell Way was created by Hampshire County Council to help cater for thousands of families who will move into new homes in North Whiteley over the next few years – alongside those living in existing homes in Whiteley. The school has around 200 pupils now, but can ultimately accommodate 630 four to 11-year-olds.

The new chapel can be used by both school and church during the week for toddler groups, coffee mornings, small acts of worship and other community activities. On Sundays, the church congregation – which has now been renamed Hope Church, Whiteley – will meet for worship in the school's main hall.

Jo Vartan, who is a churchwarden for Hope Church and works at the school as a learning support assistant, said: “It’s really exciting that Hope Church is part of Cornerstone School, and that the school is at the heart of this developing community that we want to serve.

“It has been emotional – there were tears in the school hall, because we’ve been waiting for so long. I’ve been involved with the church here for 15 years. Meeting in the community centre was great, but this will make us really visible as a church to the whole community.”

And fellow congregation member Katie Ashmore said: “It’s amazing to finally be here after so many years. There are so many things we can do here, including some of the things we used to do before lockdown. Despite everything we did online and in the community, this will make us more visible to people in Whiteley.”

Excited children spent their first day getting to know the new facilities, including a colourful Learning Hub, well-designed classrooms, airy hall and atmospheric chapel. There was a chance to play on the new play equipment, explore the playground and get used to new routines.

Large numbers of dignitaries, including local Mayors, councillors, governors and community leaders joined staff and pupils for the first act of collective worship, led by Bishop Rob and the Rev Philippa Mills, vicar of Hope Church, Whiteley. They illustrated the role of both the school and the church within the local community, with the help of cardboard bricks which they built into a wall – in which Jesus was the cornerstone. Bishop Rob and other guests were given a tour of the school.

One of the guests attending was Mary Leahy, who grew up on the farm where Cornerstone C of E Primary School now stands. She remembers harvesting potatoes and other crops in the fields on which the school has been built.

The original Cornerstone C of E Primary School was opened in autumn 2013 in Bader Way, catering for four to 11-year-olds in addition to the existing Whiteley Primary School. Bishop Christopher Foster, the then Bishop of Portsmouth, officially opened that building in October 2013.

And Whiteley Church originally started meeting in 1995. The church met in a number of different locations before settling in Whiteley Community Centre in Gull Coppice in 2002. Congregation members met there for Sunday services, baptisms, Messy Church, and other midweek meetings, but had to put out chairs and other equipment each time they met, as the centre is used by others.