Churches offer prayer and practical help to those in Ukraine 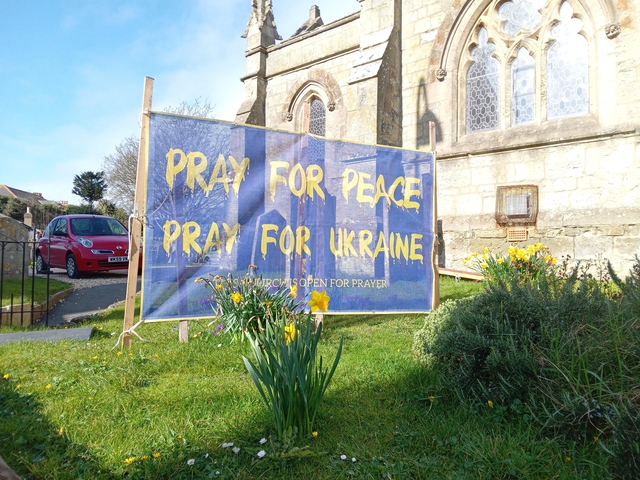 CHURCHES across the diocese have been offering prayer and practical support to help those suffering in Ukraine.

Our prayer meeting started immediately after the invasion last month, as parishes heeded the call from our Archbishops for both February 27 and Ash Wednesday to be days of prayer for peace. Prayer within Sunday services and at special prayer meetings has continued since, using some of the resources provided by the national Church of England.

Some church buildings have been serving as collection points for donations of humanitarian aid and medical supplies that will then be transported to those suffering in Ukraine, and to refugees in Poland, Moldova and elsewhere. Holy Trinity Church, Ventnor, acted as one such depot for those donating from Shanklin, Ventnor and the surrounding villages – the church is open between 9am and 4pm, Monday to Friday.

The collections are being co-ordinated by volunteers from Isle of Wight Community Help For Ukraine – in particular Lee and Sarah Stoker. They are working with MAD-Aid, a charity based in East Cowes that was originally set up to deliver medical supplies to from the UK to Moldova. They are co-ordinating onward transport of donated items to refugees in Poland and Moldova. Trucks are being loaded at their warehouse near Newport.

Many churches are advising worshippers to donate to the various appeals run by global charities, because of the difficulty of transporting hundreds of donations across large distances. But where transport has already been organised and a list of what is actually needed it available, donations can be helpful.

It's a similar story at Church of the Holy Spirit, Southsea. Their local textile recycling centre has Ukrainian owners, so Astra Recycling asked for donations of sleeping bags, warm clothing, blankets, backpacks, torches, tents, nappies and baby formula. Donations were left in the church and will be taken to Ukraine.

At nearby St Simon's Church, Southsea, worshippers have thrown open their doors to all refugees, and to members of the Ukrainian community, each Friday from 10am-12noon. They are offering coffee, cake and conversation.

Local musicians and poets from the island are also coming together for a special concert to help the people of Ukraine, which will be held at St Mary’s Church, Brighstone, on Sunday 20 March from 3pm to 5pm. Admission is free, and donations will be collected

The national Church of England has now released a special toolkit to help those who would like to help by taking in refugees and asylum seekers displaced from Ukraine by the invasion and bombing. The toolkit includes information about offering practical support and making donations, as well as prayer resources. You can find out more here, and explore the toolkit here.

Crofton parish is one of many churches to have registered to help Ukrainian refugees via the Sanctuary Foundation. This enables churches and individuals to pledge their support to those who arrive from Ukraine, via befriending, advocacy and helping them to settle in the UK.

Meanwhile, the leaders of all denominations across England have called for Russia to stop fighting and withdraw their invasion forces, in observance of the Geneva conventions. You can read the joint statement from 300 delegates, representing 52 member denominations of Churches Together in England here.