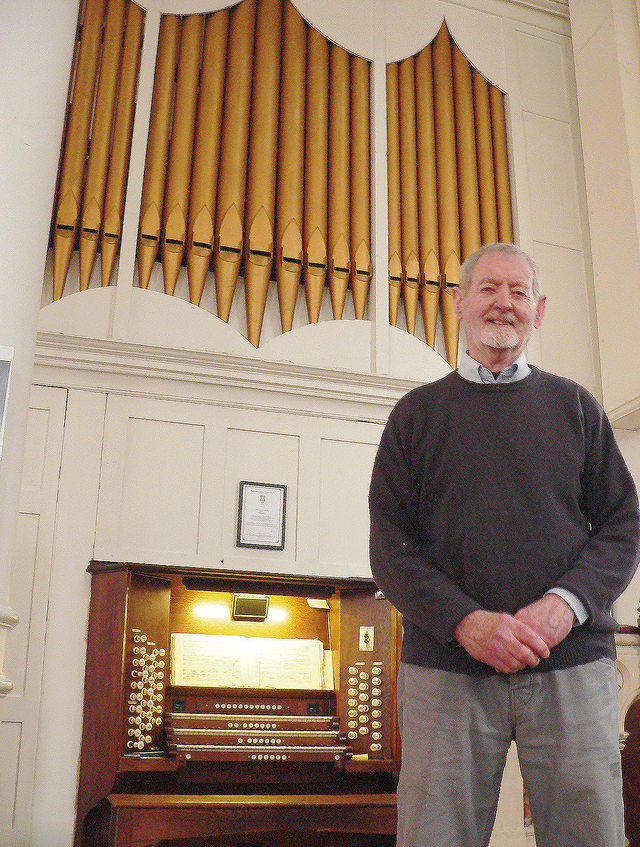 THIS 93-year-old makes an eight-hour round trip to play the organ in a church in Gosport – but it’s worth it.

Every two weeks, Geoffrey Holroyde takes the train from his home in Warwick to play the historic organ for church services in Holy Trinity Church, Gosport.

The organ, which was once played by Handel, is so special that Geoffrey spearheaded a drive to raise more than £200,000 over eight years to restore it to its former glory. Having done so, he can’t resist coming back each fortnight to lead worship there. This amazing commitment will come to an end when he steps down as a regular organist there on Easter Sunday 2022.

“It was hard work, but we managed to restore the organ by 2013 and it is now in superb condition,” he said. “It will probably last for another 100 years now. It sounds so good in Holy Trinity, where the acoustics are excellent, that I love playing this extraordinary instrument. It’s certainly the nicest one I’ve ever played.

“Back in 2005, I was actually at a naval dinner in Gosport and the following day had a look inside Holy Trinity Church. I discovered this Abraham Jordan organ which had originally been built for the Duke of Chandos in 1720, when he was the wealthiest man in England. The Duke asked George Frederick Handel to become the musician at his palace in Canon Park, and Handel composed anthems on it.

“It had been bought by Holy Trinity, Gosport, and had a major rebuild in 1885, but by 2005 it was in a sorry state. I committed myself to restore it, bought a flat in Gosport and became the honorary director of music for the church. I wasn’t paid anything, but we set about raising the money to restore the organ.

“We were given £167,000 from the Heritage Lottery Fund and raised the other £42,000 locally. We made Holy Trinity a centre of excellence for concerts. It wasn’t hard to get organists to perform here for free, because the organ is so good to play. Everyone I invite can’t stop playing it.

“I have handed over the title of principal organist, but I still play every fortnight as Organist Emeritus. I used to drive down, stay over in the Gosport flat, and then play for church services. It took me two-and-a-quarter hours to drive.However, I’ve now reached the age where my doctor tells me that I shouldn’t be driving. So I take the train, changing at Southampton, and get the Gosport ferry across from Portsmouth. That journey takes four hours each way.

“Easter is a good time to step down, because there are several services that weekend, and Easter Sunday is a good celebration. But I will return to play the organ sporadically, when I'm needed. I used to have a pipe organ in my house, but that has now been given away to a village church in Warwickshire.”

Geoffrey was born in Sheffield and moved to Stockport, where he became a choirboy at St George’s at the age of nine. The family then moved to Huddersfield when he was 11, and he was a chorister there and took organ lessons.

When the regular organist was called up for military service in the Second World War, Geoffrey ended up playing the organ for church services aged only 12.

He was head of an inner-city comprehensive in Coventry, then director of Coventry Polytechnic, and finally the director of GEC Marconi Management College. For 10 years he led the music at St Mary’s Church, Warwick, and later established a choir of 24 young people in Coventry Cathedral.