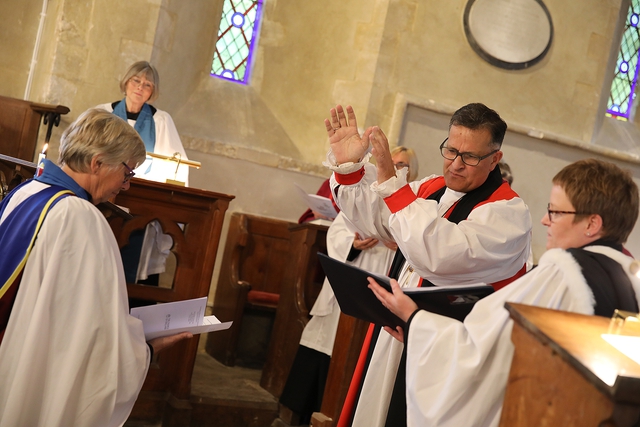 BISHOP Jonathan has commissioned our diocese’s first mainland Anna Chaplain to help minister to those who are elderly.

Dr Coleen Jackson, who is already a licensed Reader, was commissioned at a special Evening Prayer service at St Michael and All Angels, Chalton. She joins Anne Powell, who became the Isle of Wight’s first Anna Chaplain last year.

Bishop Jonathan has already said he’d like to see an Anna Chaplain in every parish, benefice or cluster of our diocese as he makes developing the spirituality of older people one of his priorities. They are named after Anna, the widow and faithful older person who – together with Simeon – recognised the infant Jesus as the Messiah in the temple at Jerusalem.

Former Meridian TV presenter Debbie Thrower, who pioneered the idea of Anna Chaplaincy in Alton in 2010, was at St Michael’s to preach about the development of this work. The concept was taken up by the Christian charity BRF, and there are now dozens of Anna Chaplains across the UK.

As well as offering spiritual care to older people in care homes and the wider community, Anna Chaplains also have a role in helping the elderly to reflect on their spiritual journeys, to listen to the wisdom they have accumulated, and to advocate on their behalf in churches and local communities.

Click here to see more photos from this service

The Book of Common Prayer evening service at Chalton was led by the Rev Vickie Morgan, priest-in-charge of Blendworth, Chalton, Idsworth and Rowlands Castle. And the worship was led by a join choir that included singers from Clanfield and Catherington as well.

Among the Bible readings was the passage in Luke’s gospel telling the story of how Anna and Simeon recognised that Jesus was the fulfilment of God’s Old Testament promises, as he was presented in the Temple as a baby.

Debbie Thrower, who remains a part-time Anna Chaplain herself, then spoke about the beginnings of Anna Chaplaincy in Alton, how she came to work for BRF from 2014, and how a network of Anna Chaplains was developed. And she paid tribute to Bishop Jonathan for his vision of a network of such chaplains serving older people across our diocese.

“BRF has a genius for scaling up Christian initiatives to give them a national – or even international profile,” she said. “They did it for Messy Church which was launched by Paul and Lucy Moore not far from here. The BRF vision was for an Anna Chaplain in every small or medium-sized community across the land.

“All chaplains draw alongside people wherever they are, and are fuelled by a personal conviction of God’s love to be there for people of strong, little or no faith at all. We now have 220 Anna Chaplains across the country. They’ve discovered that so many people have been starved of God. Perhaps they also lack the company of family or friends. Anna Chaplaincy recognises the value of listening carefully, and helping older people to feel they have spiritual meaning in their lives.

“Anna and Simeon witnessed the salvation story when Jesus was presented in the Temple by his parents. This was a hinge-point in history as God entrusted the good news to an elderly couple who had kept the flame of faith alive in their corner of Jerusalem.

“Her Majesty the Queen, who has inspired and comforted us, and led us by example, has remained faithful to her coronation vows. She has described how many are inspired by Jesus’s teaching, which gives spirituality a practical purpose.

“Bishop Jonathan is also giving spirituality a practical purpose. He wants to release the potential of more people like Coleen to be contemporary Anna and Simeons, who can loiter with intent for the good of their communities. By stating publicly that we should have an Anna Chaplain in each parish, we are witnesses to another hinge-point in Anna Chaplaincy – another small step in building the Kingdom of God here on Earth.”

As part of the commissioning, Coleen explained that her involvement with church so far had involved a focus on the elderly, through pastoral visiting, and being part of a team that provided lunches and events. She had recently worked in care homes in the parishes of Blendworth, Chalton and Idsworth, and told the congregation she was excited about her calling in this phase of her life.

Bishop Jonathan asked her to promise to develop her faith and to use the gifts and skills that God had given to her, and then called down the Holy Spirit to help to to perform his work. Coleen then led the congregation in prayers.

Coleen joins Anne Powell as an Anna Chaplain in our diocese. Anne was commissioned last year to work across the whole of the West Wight area, but with a particular focus on Freshwater.

Anna Chaplaincy is just one of the priorities that Bishop Jonathan has identified as he leads us forward. You can read more about his vision here.