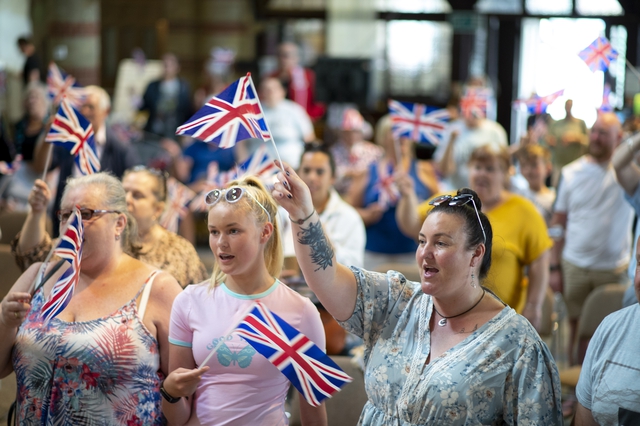 CHURCHES across our diocese marked the Queen's Platinum Jubilee with worship, parties and fun days.

They celebrated the Queen's historic achievement with services of thanksgiving, flower festivals, outdoor parties and community fairs over the four-day Bank Holiday weekend. They wanted to mark her devotion to duty and her strong Christian faith on display during her 70 years as our sovereign.

Among the events was a summer fair at St Luke's Church, Southsea, which was officially opened by Portsmouth South MP Stephen Morgan. Among those performing a variety of music were Batala samba band, the Africapella singing group and the Pompey Pluckers. Children from Victoryland Theatre Company and the church's own singing group also performed. Families sports activities, circus skills, face-painting, and home made cake.

Churchgoers and residents in one village knitted and crocheted around 2,700 red, white and blue flowers, which were sewn together to create long lengths of bunting. They were cascaded around All Saints Church, Denmead, from the church's porch into the garden and road ahead of the village's Platinum Jubilee celebrations on Saturday 4 June. The decorations also included Jubilee crowns made by children from Denmead Primary School and a wreath made by residents at the Green Meadows care home.

The vicar, the Rev Emma Racklyeft, said: "We thought we might receive a few hundred flowers, but soon realised this project was embraced by all, young and old. Soon we had more than 2,700 flowers - so many we had to ask people to stop.

The village welcomed more than 4,000 people throughout the day, as the main road through the village was closed off. The afternoon celebrations included music, magic, food, children's activities, a prayer station, floral displays and dancing. Many community groups also took part, and the event was funded by Denmead Parish Council.

Portsmouth Cathedral hosted a Big Jubilee Lunch on Cathedral Green outside the building, with a Dean's Tipple gin bar and Jubilee cocktails. There was also a treasure hunt and traditional races, including hunt the lost shoe, guess how many sweets in the jar, and guessing the guard's name.

It was followed by a special Evensong for HM the Queen’s Platinum Jubilee. The preacher was Bishop John Hind and the cathedral choir was joined by choirs from St James Church, Emsworth, St Peter's Bishops Waltham, St Mary's Funtington, Church of the Blessed Mary, Upham, and St Ann's Church in Portsmouth's Historic Dockyard.

One of the beacons that were lit nationwide to herald the Platinum Jubilee weekend was on the tower of All Saints Church, Catherington. The residents association organised the beacon to be lit, and also a choir concert in the church.

Hundreds of visitors poured into St Jude's Church, Southsea, for a barbecue in the church's garden. The celebrations after the Sunday service included free burgers and hot dogs, live music, art and craft activities and a bouncy castle inside the church.

Bedhampton Parish Church hosted the Big Bedhampton Picnic to mark the Platinum Jubilee, which included races, puppets and stalls. There was also the chance to splat the rector with wet sponges. And there were flower festivals in St Peter's Church, Shorwell, on the Isle of Wight, and in All Saints Church, Steep.

Church bell ringers at All Saints, Ryde, marked the Jubilee, with 10 ringers taking part over two days. They rang on the Thursday evening, ahead of beacons being lit across the UK, and on Friday, leading up to the start of the service of thanksgiving at St Paul's Cathedral. The latter occasion began with the tolling 70 times of the huge tenor bell, in recognition of the Queen's 70 years on the throne, after which the other seven bells joined in.

And Bishop Jonathan rounded off the long Jubilee Weekend with an Evensong at Newport Minster, to give thanks for the dedication of HM the Queen over the 70 years of her reign. The bishop was joined by the Lord Lieutenant of the Isle of Wight, Susie Sheldon JP, Deputy Lord Lieutenant Brigadier Maurice Sheen, and singers including Voices of the Isle of Wight and children from Queensgate Primary School, in East Cowes.

To see more photos of our Jubilee celebrations, click here