Southsea man honoured by the Queen for feeding the hungry 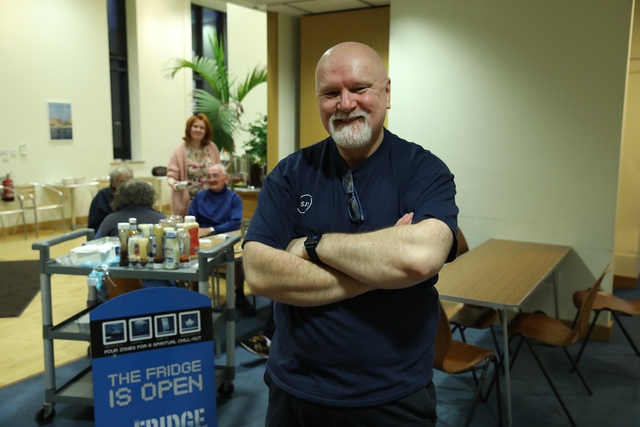 THE man who leads a church group that fed vulnerable people throughout the pandemic has been honoured by HM the Queen.

Jim Campbell, who leads the Friday Fridge group based at St Jude’s Church, Southsea, is being awarded a British Empire Medal in the Queen’s birthday honours for services to the community of Southsea.

He co-ordinates the team who open up St Jude’s Church every Friday night for ‘Friday Fridge’ – offering café-style food, hot drinks and conversation to anyone who is around in the evening.

When it was initially launched in October 2006, it attracted those leaving pubs and clubs in Southsea, who dropped in on the way home for late-night conversation and prayer. The project has evolved over the years, so that many of its current guests happen to be homeless, vulnerable adults or live on the edge of society.

During almost two years of the pandemic, Friday Fridge operated as a takeaway-only service, with guests collecting pre-prepared hot food and groceries from the front doors of the church – every single Friday from March 2020. Hundreds of people were fed, and the number of guests more than doubled throughout the pandemic.

During 2022, Friday Fridge has reverted back to its café-style origins, offering bacon sandwiches, cheese toasties and a variety of other food.

Co-ordinator Jim Campbell, aged 60, who has volunteered at Friday Fridge for the almost 16 years it has been open, said: “For the first five or six years, Friday Fridge did open from 10.30pm-2.30am and attracted those leaving local pubs and clubs. But the clubs closed, some of the pubs moved and there was less of that passing traffic. It became a place where we could welcome anyone who was in need, and we ultimately moved to open from 8pm-10pm.

“The most important thing for me is that we are welcoming people into the church. Part of that welcome includes food. That became particularly important during the pandemic when people weren’t allowed to actually come in, but still desperately needed feeding. I was immensely proud of our dedicated team, who turned up regularly – despite the risks to their own health – and prepared food to give away at the church doors.

“It was definitely needed, as the number of people we were helping doubled or even tripled on some days. We also changed to be open every single Friday of the month.

“It’s incredible to be nominated for this honour, and I’d genuinely like to accept it on behalf of the whole team, not just myself. Those involved over the years have included people from our church, other churches, other faiths and those without faith – all of whom just want to help those in need.”

Father-of-four Jim lives in Southsea, works as a filtration engineer, and attends St Jude’s Church himself. He is also Pompey FC season ticket holder. He expects to receive his BEM from the Lord Lieutenant and also to attend a garden party at Buckingham Palace.

To meet some of those who attend Friday Fridge, click here