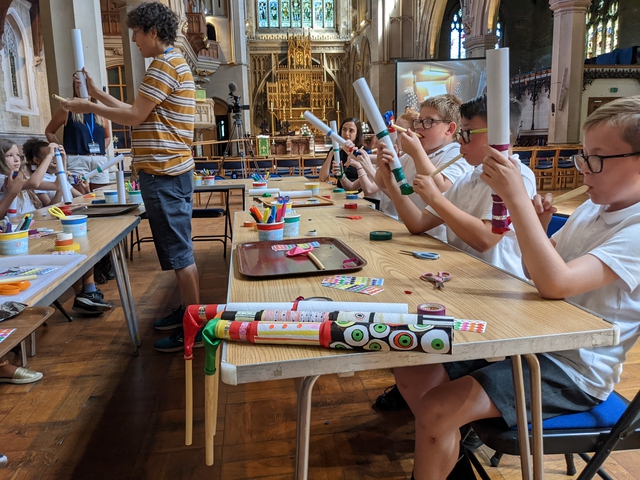 BISHOP Jonathan has re-dedicated the historic organ at St Mary’s Church, Fratton, after an ambitious project of restoration.

Hundreds of worshippers and supporters packed into the church for a service of music and dedication, which was followed by an explanation of the restoration process. It was part of two weeks of celebration, which has also included workshops for schools, dance sessions, worship and recitals.

The Organ Project was launched in 2018 to help restore the 1889 J W Walker organ, interpret its history, inspire a new generation of musicians, and engage with the local community. Organ restorers Nicholson and Co removed every piece of the historic organ, repaired and cleaned each piece in their Malvern workshop, created a brand new console and reassembled it in the Fratton church.

The Organ Project aimed to interpret, restore and unlock the heritage associated with 130 years of music-making in St Mary’s Church. The unique 1889 pipe organ had been in critical condition for some years. A partial refurbishment in the 1960s had provided a new console, new actions and tonal alterations, but the limited funds at the time meant the restoration was fairly limited.

When decisions were being made in 2019 about how to restore the organ, the thinking was to restore, reconstruct and rebuild it as close as possible to the original Victorian build, but with a new, more reliable mechanism.

The Project was greatly helped by a successful application to the National Lottery Heritage Fund. That funding – of more than £760,000 – was provided to help the church to engage with its community in the area of music, to develop volunteer skills and interpret the organ's history, science and sound, as well as to restore the instrument.

So when the time came to celebrate the completion of the restoration, it was fitting that the church should welcome more than 400 children for workshops within the church, helping them to understand how organs work. There was also a lecture on the Boer War by university lecturer Dr Karl Bell, reflecting the fact that the 1901 organ screen was gifted in memory of those who died in the Boer War. And worshippers and local residents also enjoyed a Mo’jive tea dance, a modern-day interpretation of the Victorian tea dance.

The week-long celebration also included the Wind Pipes Exhibition, by Sarah Kenchington. It’s actually a pipe organ built from redundant bellows and pipes, colour-coded with bright coloured ribbons. It is designed to be played by people of all ages, all abilities, musical or not - and was created from over 100 decommissioned organ pipes, assembled from salvage yards and eBay.

The formal service of rededication was led by the vicar, Canon Bob White, and by the Bishop of Portsmouth, the Rt Rev Jonathan Frost. Bishop Jonathan offered a prayer of rededication and blessing and sprinkled the organ with holy water from the organ loft. Afterwards, Andrew Caskie, managing director of Nicholsons, explained something about how the restoration had been completed.

“This is a vast building, but it’s not a vast organ,” he said. “It was an interesting experiment by Walker and Sons at the time, of creating an organ that makes a big sound from something that is on the larger side of medium-sized. This then become the model for a number of instruments.

“The decision was taken that we would put the organ back to how it was originally created in the Victorian era, but with a new mechanism. This meant taking it to our workshop in Malvern, replacing those things that had worn away, reconstructing some pipework, cleaning every single part of the instrument, and building a new console - which we based on a photo of the original console. We calculate it took 15,000 man hours to do this.”

For more photos of the re-dedication service, click here

James Atherton from Nicholsons and organ consultant William McVicker demonstrated some aspects of the organ to the congregation, illustrating the ‘Great Big Victorian Hug’ offered by the warmth and the depth of its sound.

There was then an inaugural organ recital given by world-renowned concert organist Thomas Trotter, who is Birmingham City Organist, organist at St Margaret, Westminster, and is well-known for his recordings on the newly-renovated organ at Kings College, Cambridge.

Project manager Matt Dixon said: “We are proud to have saved a nationally important instrument. We hope that future performers, students and audiences celebrate this heritage, the reaffirmed tonal character of this instrument's unique 1889 design, and the wider heritage and musical life of this great parish.”

The celebrations will conclude with a come-and-sing Choral Evensong on July 17, and an organ spectacular on July 23, featuring Portsmouth Choral Union and organist Daniel Cook, of Durham Cathedral.