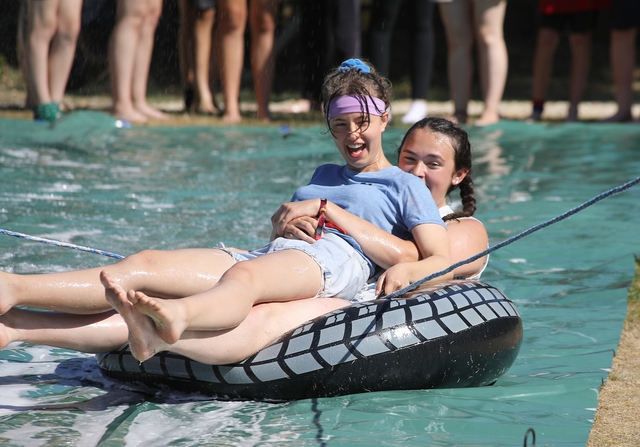 TEENAGERS from church youth groups around Portsmouth deepened their faith as they gathered for a four-day holiday this summer.

The 11 to 18-year-olds, who gather each month for High Tide youth services, spent time together at a school in Surrey for a residential based on TV gameshows. They took part in activities based on the TV programmes Bake Off, Repair Shop, Taskmaster, Hunted and Million Pound Drop. They also learnt about Jesus being a 'Gamechanger' with regular worship, prayer, discussion and talks about faith each day.

As well as baking cakes and creating crafts, they enjoyed being pulled along a waterslide, firing at each other in a lasertag, toasting marshmallows on a fire, dancing at a silent disco, and sliding down a zipwire. The teenagers came from nine different churches including those in Southsea, Crookhorn, Emsworth, Stubbington and Fareham.

The holiday, at Luckley House School near Wokingham, was organised by the national charity Scripture Union, alongside the youth group leaders who organise the monthly, ecumenical High Tide youth services.

The 27 young people travelled to Surrey via coach. Many of them already knew each other from a previous High Tide residential weekend in the Isle of Wight in April 2022, or from the regular High Tide youth services. But Day 1 still began with some icebreakers to help new people feel welcome - and they were separated into four teams that would compete with each other throughout the four days.

Each of the four teams tried their hand at baking cakes and creating art and craft items on Days 1 and 2, trying to impress judges with their creativity and teamwork. There were chocolate cake showstoppers and mini-cheesecake signature bakes among their creations, as well as impressive painting and sewing techniques. Both evenings ended with a Hunted-style game, which involved leaders hiding in the extensive grounds and sending clues to their locations via WhatsApp. Teenagers bedecked with neon glow sticks tracked them down in the dark.

The Rev Thea Edwards, curate at nearby Christ Church, Woking, answered an SOS to help lead worship on all three evenings. And local youth leaders Heather Powney, Jenni Whymark and Clare Hargreaves introduced the idea of Jesus as a 'gamechanger' at a series of evening talks. Small groups sessions in the mornings also helped to stimulate discussion about faith.

Day 2 saw a series of 'Commonwealth Games'-style challenges, which included alternative takes on the triathlon and beach volleyball - including throwing jelly babies into small cups and flinging a tennis ball with your feet.

Day 3 included a series of water-based games to help keep teenagers cool in the heat, including a 20-metre waterslide that they could be pulled along. That evening also included a jousting-style electronic game and a silent disco, prompting both teenagers and leaders to dance silently inside and outside.

The final morning involved a lasertag game, in which two teams had to fire lasers at each other from behind inflatable obstacles. And the last session included the 'Million Pound Drop' game, in which the four teams could gamble all the points they had already accumulated over the four days on the answers to tricky multiple-choice questions.

Jess Murphy, aged 17, from Church of the Good Shepherd in Crookhorn, said: "The games have been all super fun, just having everyone join in - especially Hunted, because we were chasing leaders in the dark, and we got super competitive. And coming together as the youth and building those relationships has been really awesome.

"Being a Christian for me is about having that person there who always loves you, and is looking after you, who you can rely on. And even through all the toughest times, you know he's always there."

Anna Britchfield, 14, who was recently baptised at St Jude's Church, Southsea, said: "I really like being part of a community with loads of other young Christians, and I really like doing games and activities with them because it brings you all closer, especially when you go back to doing normal High Tides.

"Being a Christian is like having someone who knows all the hairs on your head, knows everything about you, and is always someone I can rely on and talk to. It's like having a big family and being part of God's plans."

Ashleigh Coles, aged 11, from Holy Rood Church, Stubbington, said: 'The thing I've enjoyed about the High Tide holiday is that I've come closer to God. Before this, I wasn't a massive Christian, but coming on this residential has brought me close to God. Stuff you can't talk to other people about, you can talk to God about. He'll always love you, no matter what you do."