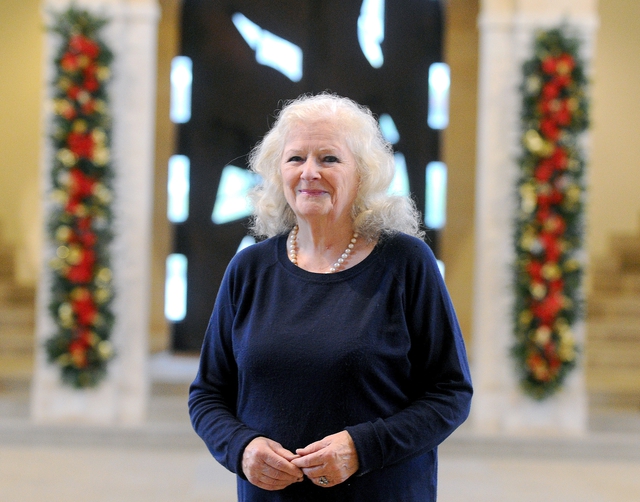 SHE has inspired generations of children to explore the heritage and history of Portsmouth Cathedral – and still contributes hugely to its life in retirement.

Now Rosemary Fairfax (pictured above, photo courtesy The News) has been honoured in the King’s first New Year’s Honours list, as she receives a British Empire Medal for her services to the cathedral and community.

In 1989, she became the first Visitors and Education Officer at our cathedral, marshalling teams of volunteers to welcome classes of schoolchildren and teach them more about the building, its history and the Christian faith.

She held that position until she retired in 2013. Her time included devising sessions to explain the completion of the west end of the building in 1991 and establishing a pattern of workshops still used today. In retirement, she still helps as a volunteer with schools workshops – and the annual Leavers’ Services with Year 6 pupils from church schools across the diocese.

Rosemary led teams that organised exhibitions of art in the cathedral for many years, welcoming Yoko Ono there to showcase her ‘Morning Beams’ installation in 2004. One exhibition hosted by the cathedral included a painting by Prince Charles, who as King has now offered her this royal honour.

Rosemary has led the cathedral’s Flower Guild for decades, arranging flowers with a team of volunteers for many significant occasions. She has welcomed people to cathedral services for many years as a sideperson, and is current serving as a deputy churchwarden.

And, in retirement, she still supports people as a lay pastoral assistant and as part of the cathedral’s bereavement team, visiting the bereaved in their homes.

“I was astonished when I heard about this honour and I didn’t believe it at first,” she said. “I’m happy to accept it on behalf of all those who have volunteered alongside me at the cathedral. It really is a shared honour, as there are so many other people who do more than me.

“I first came to the cathedral in 1983 – they reached out to me as my husband was dying, and I was very grateful. I owe a lot to the cathedral and it has been a privilege to have these opportunities to be involved. Our lives would have been very different if it wasn’t for the cathedral.

“It was the then provost David Stancliffe who said he had a role for me, and we devised these days of workshops for children. It’s been a tremendous honour and privilege to welcome thousands of children over the years, and really satisfying to hear the quiet buzz as they explore the building.

“It has also been a privilege to talk to those who have been bereaved, going into their homes, offering them Home Communion. And I’m really pleased that the children I met at the first Christian-Muslim evenings have now grown up and had their own children.

“I’m really grateful that this honour recognises the work that churches and cathedrals do to serve their local communities. This is a reward for everyone who is part of our cathedral community, which does so much to help and support other people.”

Could you be our cathedral's new Learning and Schools Officer? Click here to find out more

The Dean of Portsmouth, the Very Rev Anthony Cane, said: “While we have many wonderful volunteers, as Rosemary would be the first to point out, her contribution to cathedral and community life is exceptional for its sheer variety over nearly 40 years.

“Those who see the wonderful Christmas flowers and decorations currently in the cathedral, all done by Rosemary and her team, may not realise that this is just one aspect of her incredible work in education, pastoral care, interfaith dialogue and so much more.

“Everything she does is characterised by her warmth, generosity of spirit, and considerable expertise, and I am absolutely delighted that she has been honoured in this way.”