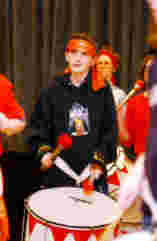 IT was a special moment for many of the 170 young people in the cathedral.

As the picture of a crucified Jesus faded from the giant video screen and the haunting music died away, they were left to reflect on how they could make a real difference in the world.

They had spent a memorable evening experiencing God through the Carnival of Prayer at Portsmouth Cathedral, in workshops, games and worship.

The 11 to 18-year-olds had beaten out rhythms on samba drums, created colourful hats and headdresses, painted images onto each other's faces and gyrated to the rhythm of salsa dancing.

Then, in a final act of worship, they had watched video clips that helped to show their own place in the world, Christ's sacrifice on the cross and how they could communicate his message to the wider world. All three of our diocese's archdeacons and the dean of the cathedral spoke for a few minutes.

Groups of youngsters from across the diocese - from Blackmoor to Lee-on-Solent and from Warsash to Ryde - came together for the evening in February designed to encourage and empower them in their Christian lives.

In many parishes where there are only a handful of teenagers in church youth groups, the best thing about the event was joining with young people from other parishes. Some discovered for the first time that their school friends were Christians.

The Rev Kath Abbott, who brought a group from St Mark's and St Edmund's Churches in Wootton, said: "On the ferry going over, our group met up with some other lads who they knew at school, who go to St John's, Newport."

Portsmouth Cathedral was transformed for the event, with subdued lighting, a giant video screen in the quire, and tables groaning with craft materials in the nave.

After some icebreaker games, the teenagers could choose between workshops including drama, samba drumming, salsa dancing, carnival crafts, making rosary beads, photography and face-painting. Paulsgrove-based carnival arts company Dot to Dot offered some of the workshops.

There were also chill-out zones and prayer zones where they could use interactive bags to explore their own prayer lives through art and compiling a prayer diary.

Everyone made their own carnival hats to wear during the worship at the end of the evening as a symbol of the celebration.

The making of the rosary beads was led by Sister Rita Elizabeth, from the Southsea-based Anglican community Sisters of Bethany. She said: "I was overwhelmed by the numbers and the spirituality of those who spent time with me. I was also very moved by the desire of so many to pray for peace."

Diocesan children's and youth work adviser, the Rev Karina Green, said: "The whole evening was very visual, because we live in a very visual age and young people are particularly visual.

"So the hats were a symbol of the celebration and of going out from that celebration to make a difference in the world. It certainly made the evening more lively.

"The video images also reinforced what was being said about who we are as people, who Christ is and the fact that the world is not always a nice place and needs to be transformed.

"The fact that there were lots of small groups from parishes showed how important it was to hold an event like this. If they only have three or four young people in their parish, it's easy for those teenagers to assume they are the only young Christians around. For them to meet with 170 others like this would have been a great help.

"I also think it was the right decision not to continue the event through the night, as we originally planned. We had a concentrated, lively evening of activity, rather than stretching it out through the night."

And Canon Bob White, vice-chairman of the board of education, said: "I think it was the best youth event we have done at the cathedral so far."