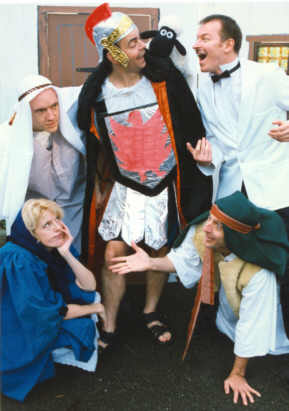 Top Cat Theatre Company getting into

IT’S the dead of winter and the innkeeper’s wife is determined to keep her stable spotless.

Then along come Mary, Joseph and some shepherds. Will this hygiene-obsessed woman ever get the chance to scrub her manger properly?

The latest production by Top Cat Theatre Company - Scrub That Manger! - is an hour-long family show for Christmas. The traditional Nativity story is told in a new way that emphasises the humble beginnings of the infant Jesus.

Written by diocesan communications adviser Neil Pugmire, it will be touring around the diocese from the end of this month, visiting Hart Plain, Locks Heath, Newport, Buriton, Southsea and Shedfield around Christmas.

“I wanted to write something that would be appreciated by children from the age of five upwards, whether they had ever heard the Nativity story or not,” he said.

“Although it’s always difficult to find a new slant on the Christmas story, I think the fact that Jesus chose to be born in a dirty stable surrounded by animals is very interesting, particularly in this hygiene-conscious age.

“I heard recently that Jesus almost certainly had head lice - because most people in his era did. That does put a new angle on the paintings you see in church of this angelic-looking, spotless Christ-child!”

This is the seventh full-length production by Top Cat Theatre Company, which includes Christians from across Portsmouth. Previous productions include The Screwtape Letters by CS Lewis, Walkout! - an adaptation of John Bunyan’s Pilgrim’s Progress and the family show The Adventures of the J Team.

Tickets for Scrub That Manger!