Churches open doors to the homeless on coldest nights of winter 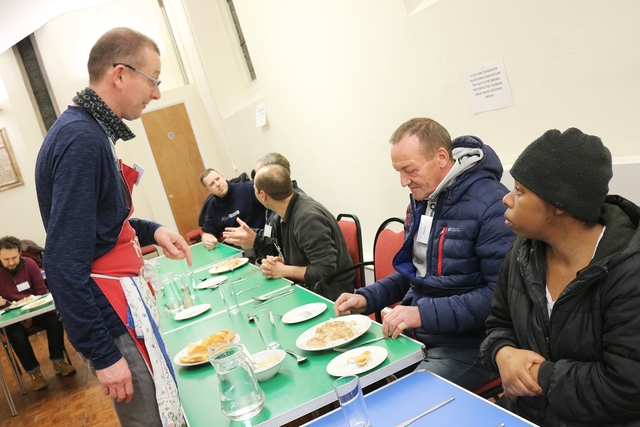 THE snow starts gently swirling outside the church as the first homeless man comes in from the cold.

It’s sticking to guests’ coats, hats and beards as the final few guests hurry into the warm building. On the coldest night of the year, they are grateful for food and beds in St Jude’s Church, Southsea.

The men wrap their cold hands around hot drinks as they’re welcomed by enthusiastic volunteers with board games. Nearby, the choir finish their rehearsal, as camp beds are unwrapped, and pillows and duvets prepared.

This is the latest night of Open Church – a project in which churches in Portsmouth open their buildings to the homeless each night for eight weeks. Seven churches are taking it in turns to host vulnerable people each night from January until March.

At 8pm, the kitchen team invite their guests through for a meal of crab and sweetcorn soup, chicken satay and rice, and banana fritters. Then the tables are cleared, the camp beds brought in and the 12 men settle down for the night, sleeping alongside four volunteers.

In the morning, another team come into the church to make them breakfast before the men go on their way. They’ll be sleeping in another church the next night.

David Smith, who has been homeless for 22 years after a relationship breakdown, appreciates the efforts made to make them feel welcome. He recently moved to Portsmouth from London to try to find accommodation.

“Without this project, I’d be on the streets,” he said. “I came here because I thought there might be some accommodation, but there isn’t. The most important thing is that I’m inside, and it’s brilliant that they’re providing this for us.”

Alian Bordeanu, who comes originally from Romania, and currently sells The Big Issue in Southsea, said: “Today I sold no copies. Tomorrow I hope to sell some. I come in because of the snow, and food is good.”

Volunteer Mark Neck, from St Jude’s Church, was also involved in the pilot project last winter. He’s got to know three or four homeless people, and stops to chat to them regularly.

“It’s a way of giving something back,” he said. “I wanted to get more involved in the church and I felt God steering me towards this. Sometimes just talking to people really helps, because so many people just walk past. I’ve also tried to help to get people off the streets by advocating on their behalf.

“This project is a really good starting point. Of course it’s just a sticking plaster on the problem, and more needs to be done to help vulnerable people in our city. Last year, one of the guys actually had a job, but wasn’t able to find a place to rent and so was still coming to sleep in our churches each night.”

Open Church is happening with the support of the Society of St James (SSJ), a Hampshire charity that already works with the homeless. All the guests are referred to the project by SSJ. It is running from January 7th to March 4th this year after a four-week pilot project last year.