Jubilee concert is a riot of creativity 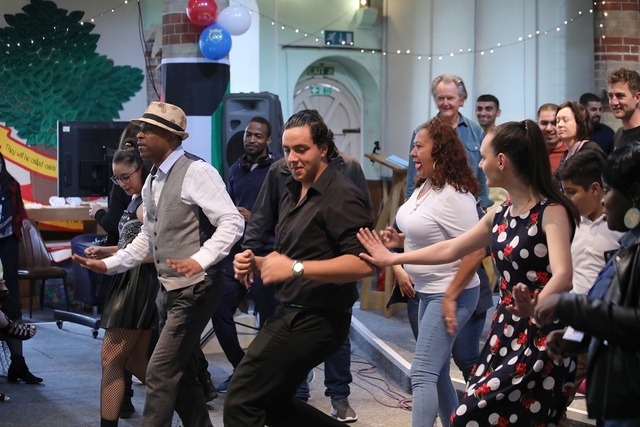 IT was a chance to celebrate the Queen’s Platinum Jubilee with a concert that embraced art and culture from across the world.

Refugees and asylum seekers were among those performing in St Luke’s Church, Southsea, to kick off a week of celebrations. They shared poetry, dance, music and drumming with a hugely appreciative audience, in a riot of colour and creativity.

They normally meet at St Luke’s on a Monday morning for the Refugee Hub, run by Portsmouth City of Sanctuary. It aims to offer a culture of hospitality to refugees, with free casework support, food and drink and English lessons. But for this special concert, it was the refugees, asylum seekers and their friends who shared a diverse array of music and culture from their home countries.

For 15-year-old Arshia Javadian, it was his first chance to play piano in front of a crowd of this size. He played while his mother Behnoosh recited Iranian poetry – before she returned to dance with fellow performers Elena and Marjan.

“I love to play the piano, but I’ve never performed to an audience as large as this and my hand was shaking beforehand,” he said. “I get a sense of freedom in my mind when I do it. I love to perform with my mother – she helps us a lot and she has our back.”

The concert also included performances by local professional artists, who supported the event alongside Arts Council and Hampshire and Isle of Wight community funding.

It began with a rendition of This Little Light of Mine by members of the Portsmouth City of Sanctuary Refugee Hub – an impressive feat in that many of them are still learning English. Nabz, from Iraq, then played the oud, a traditional Arabic musical instrument, with Annet singing alongside him.

Salsa dancers Katanga and Iulia, who lead salsa lessons across the south coast, then performed a spectacular dance. They persuaded almost the entire audience onto the stage and taught them some basic salsa moves.

Omar Jose and Majid were among the performers to recite poems they had written, some of which addressed issues they had faced themselves. And two sisters from Afghanistan, Mariam and Malalai recited poetry and sang in Afghan.

The Africapella choir led the audience in a series of a capella songs with African origins, before Iranian dancers Behnoosh, Elena and Marjan took to the stage with Arshia accompanying them on the piano. The concert finished off with a performance of drumming by local group Drum Nation.

The vicar, the Rev Annie McCabe, said: “We are so privileged to host the Refugee Hub, and it has been amazing to see them share something of themselves in this creative way. What a great way to start off our Jubilee celebrations!”

The celebrations at St Luke’s Church, Southsea, continue with a community fair and big lunch later in the week.

Click here for details of the Refugee Hub, run by Portsmouth City of Sanctuary
Click here to see more photos from the Jubilee concert at St Luke's, Southsea