Churches open for people to pay their respects 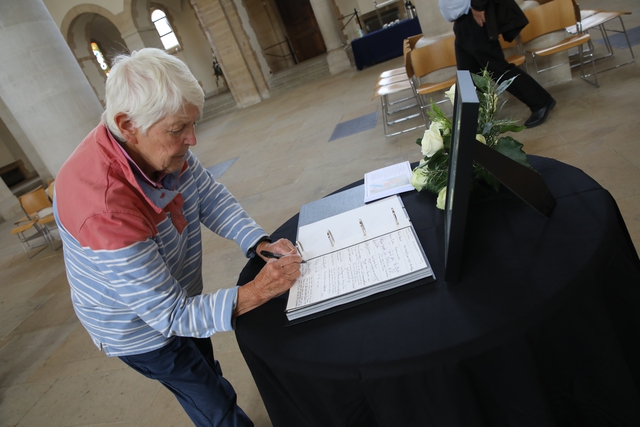 OUR churches are open for people to pay their respects to HM Queen Elizabeth II, as we say farewell to our beloved monarch.

Visitors are able to sign condolence books, light candles and say prayers in churches across south-east Hampshire and the Isle of Wight as they give thanks to God for her life. In many churches, muffled bells are also being rung and flags lowered to half-mast, as a mark of respect.

Churches are throwing open their doors and hosting special services during the 10 days of national mourning, offering a place of sanctuary as we pray for HM the Queen's life, for our new King, and for our nation.

At Portsmouth Cathedral, the opening hours have been extended to 8am-7pm during the period of mourning. The cathedral was open until 10pm on the day the Queen's death was announced, and a steady stream of people have visited to sign its condolence book.

Among them was Amanda and Richard Derrick, from St Albans, who were on their way to catch the Isle of Wight ferry when they decided to pop into the cathedral. Amanda's own father Don Barton, was almost exactly a year older than HM the Queen. He died this August after enjoying the Queen's Platinum Jubilee, and his funeral will be held next week.

"He absolutely loved the Queen," said Amanda. "He served in the Royal Engineers and the fact that she also served during the war made a big difference. He was determined to last until the Platinum Jubilee and every day of those four days, we had a tea party. He sent a card to her, and received a letter back from the Palace, which he was thrilled about.

"Of course the news about the Queen makes me think about my father, as I'm still grieving for him. Seventy years ago tomorrow, he was cycling through the East End during the Second World War and a bomb exploded about 20 yards in front of him, and he was blown off his bike. So he also respected the fact that the Queen and her family stayed in London during the war."

Tony and Chelsea Morgan, who attend services at the cathedral regularly, were also in the queue to sign the book of condolence. Tony said: "It's that continuity of service for such a long time that is so impressive - the fact that she carried out her last public engagement only two days before she died. It is the ultimate example of how her life was about serving others. We just wanted to pop in and pay our respects."

And Chelsea added: "We thought we would always have the Queen. I'm so glad that we were able to celebrate her Platinum Jubilee, and our children have learnt so much about the Royal Family, and are asking questions about having a new King."

Bellringers gathered in the cathedral bell tower to ring muffled bells from 12noon today (September 9), and flower arrangers were also putting together a selection of golden blooms in honour of HM Queen Elizabeth. Special prayers are being said at the 5.45pm Choral Evensong at the cathedral, and a thanksgiving service will take place in our cathedral at 3pm on Sunday 18 September.

Newport Minster will be open today (September 9) until 7pm for anyone who would like to pray. The church will be open again from 10am on Saturday and Sunday, with a special service of Holy Communion on Sunday evening at 6pm. The bells will be rung half-muffled at the Minster from 6pm on Sunday.

Meanwhile St Mary's Church in Carisbrooke will ring half-muffled bells during their Sunday morning service at 9.30am.

Elsewhere on the Isle of Wight, All Saints Church, Gurnard, is among the churches that are also open. You are welcome to sit quietly, light a candle or write in the book of condolence between 10.30am and 4pm.

All Saints Church, Denmead, will be open from 8am until dusk each day for people to sign a book of condolence, sit in silence, pray and light a candle. At 7pm tonight (September 9) there will be a short service of Prayer and Reflection.

St Luke's Church in Southsea will be open on Friday and Saturday from 10am-3pm, all day on Sunday and from 9am-5pm from Monday until Thursday. St Thomas's Church in Bedhampton will be open from 10-4pm each day so that visitors can reflect on the life of HM Queen Elizabeth II.

St Mary’s Church in Fratton will remain open each day from 9am–6pm and there will be an opportunity to be still, pray and light a candle. There are also prayer cards for you to use at home or in the Church. The flag at St Mary’s is being flown at half-mast, except for 11am on Saturday until 1pm on Sunday, when it will be flown at full-mast to mark the accession of the new King. Sunday morning services will be Requiem Masses for HM the Queen.

St James Church, Emsworth, and St Thomas a Becket, Warblington, are also open between 10am and 4pm each day, for people to write their messages in books of condolence, light candles and pray. The churches hope to hold a service of thanksgiving as soon as they are able.

Hope Church Whiteley, which is based in Cornerstone C of E Primary School in Whiteley, will open their chapel space between 3pm-4pm and again between 7pm-9pm tonight for people to reflect and pray.