Anna Chaplaincy takes off on island 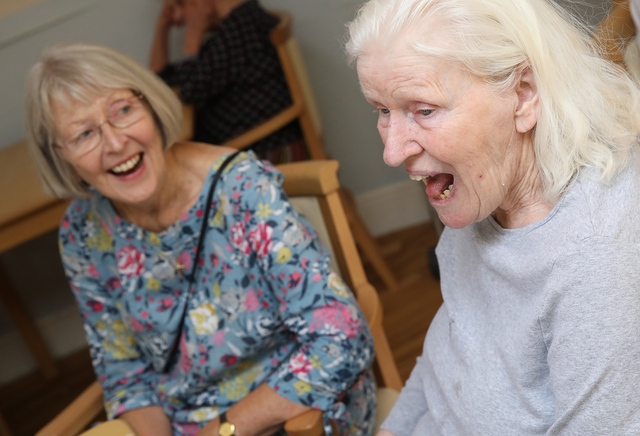 AS Anne Powell started to lead the informal service in the care home, some residents were standing up and walking around, shouting out, or even asking for a cuddle. Several seemed confused about what was going on.

Then, as Anne started to lead them in the words of the Lord’s Prayer, something amazing happened. Long-term memories kicked in, and many of them started faithfully reciting the words they’d learnt decades ago.

Something similar happened as they started to sing ‘All things bright and beautiful’. Some of the residents at Westview House in Totland Bay might be struggling with dementia, but they could remember the words to a hymn they’d sung in their youth. It ended with a solo by an elderly man who used to be a choirboy.

This is the kind of ministry that Anne Powell offers regularly. As Anna Chaplain for West Wight, she leads informal services and extended Communion services in up to nine care homes in the area, and visits other elderly people at home. She was the first in what we hope will be a network of Anna Chaplains across our diocese.

Anne had visited Westview with three other volunteers, who helped residents to engage with what was happening and guided them through a service on the theme of ‘flowers’. They used an Amazon Alexa to play songs and hymns.

“It’s the third time we’ve visited and I think the residents are getting used to us now,” said Anne. “The first time I went I set up a small table with a Bible, a lit candle and some flowers on. By the time I turned around, I found them scattered across the room, so now I just take the hymn sheets!

“I think every time you make a connection with someone in that situation, it is special. I had one person who had had no spiritual input for two years say to me: ‘I have such a special feeling inside me now’, and it makes a huge difference when you get that kind of reaction.

“I enjoy everything that I do, and it’s so rewarding when a service has gone down well. It doesn’t need to be incredibly deep, and it’s better not to talk for too long. You just need a little message for them to take away. It’s a privilege to be able to do that.

“It was actually Covid that seemed to convince some of the local care homes that they might need some more spiritual input. We had a few introductory meetings, explained what we could do, and we’ve been welcomed with open arms.

“And when you visit people in their own homes, you have to let them set the agenda. They can talk about what’s on their mind, which might be a bereavement, or an illness, or an anxiety – or something they want to celebrate or remember. One lady had lost her husband and brother within a month, and she needed someone to listen and support her.

“I do believe that I’m in the place that God has called me. Having the label as ‘Anna Chaplain’ does allow you to be slightly more direct about spiritual things than being a pastoral visitor from the local church. The one thing I think I’d love is some ‘Anna Friends’, people who feel called to work alongside me for a small number of hours each week.”

Anne was commissioned as Anna Chaplain by her vicar, the Rev Leisa Potter, last October in her home church – All Saints, Freshwater. She works across the West Wight area, with a particular focus on the Freshwater and Totland Bay area. Having worked in the hospitality industry, and then spent 12 years volunteering with the chaplaincy team at St Mary’s Hospital, Newport, she felt called to the role.

Like other Anna Chaplains around the UK, she offers spiritual input and ministry to elderly people in the community, in care homes and in their own homes. Some older people are referred by health professionals.

The role had been pioneered by former TV presenter Debbie Thrower, in the Alton area of Hampshire from 2010, and the network was expanded by the charity Bible Reading Fellowship (BRF). There are now more than 220 Anna Chaplains working across the country. Anna Chaplains are named after the faithful widow Anna, who appears in the Bible recognising the baby Jesus as the long-awaited Messiah.

As Bishop Jonathan began his work as our bishop, he outlined a vision to see Anna Chaplains in every parish, benefice or neighbourhood of our diocese, to ensure that the elderly within our local communities are cared for spiritually. Anne was quickly joined by Coleen Jackson, a Reader from Blendworth, Chalton and Idsworth, who became our diocese’s first Anna Chaplain on the mainland in May.

The bishop asked Coleen and the Rev Samantha Martell, team vicar in North Gosport, to lead a strategy group to develop Anna Chaplaincy across the diocese. In June and July, information sessions were held for those interested in finding out more.

The first training sessions were held in September, at which another 20 potential Anna Chaplains were given training. Those who missed out can apply and receive training later in the autumn and New Year.

Each deanery has been asked to nominate an ‘advocate’ to attend the strategy group, so they can help to shape what Anna Chaplaincy looks like. It has been made clear that the diocese isn’t providing a blueprint for how to do Anna Chaplaincy, but rather a framework that allows individual churches and their Anna Chaplains to develop whatever is right for their own community.

Among other things, we are looking to pilot what ‘inter-generational’ or ‘multi-generational’ activities might look like – bringing our young people and older generations together.

In November Bishop Jonathan will confirm his roadmap for the diocese and how he expects Anna Chaplaincy to take shape over the next three to five years. Among the ideas is an annual service of thanks for Anna Chaplaincy, perhaps at Candlemas.

Anna Chaplaincy founder and pioneer Debbie Thrower said: “Several factors combine to confirm Anna Chaplaincy as a timely response to the growing need for spiritual care among older people: the rapidly-ageing demographic, a growing emphasis in the Church on lay leadership, and a broader interest in chaplaincy.

“More than ever, pastoral care and community engagement are seen as vital in the wake of the Covid pandemic, with a disproportionate toll taken on individuals in later years.Portsmouth diocese is unique in making Anna Chaplaincy one of its top priorities in every parish.

“It’s so exciting not only seeing Anna Chaplaincy being regarded as a trusted and authoritative voice in this sphere, but also the way more and more people are discerning their vocation to supporting older people in this way.”

For more information about Anna Chaplaincy in our diocese, or to apply to become one, see www.portsmouth.anglican.org/anna. For information and resources from BRF, see www.annachaplaincy.org.uk.

Find out more about Anna Chaplaincy in our diocese here