The couple who have fostered 66 children

LAURIE and Ethel Brokenshire have fostered 66 children and young people in the past 21 years - and they still pray for each one of them. 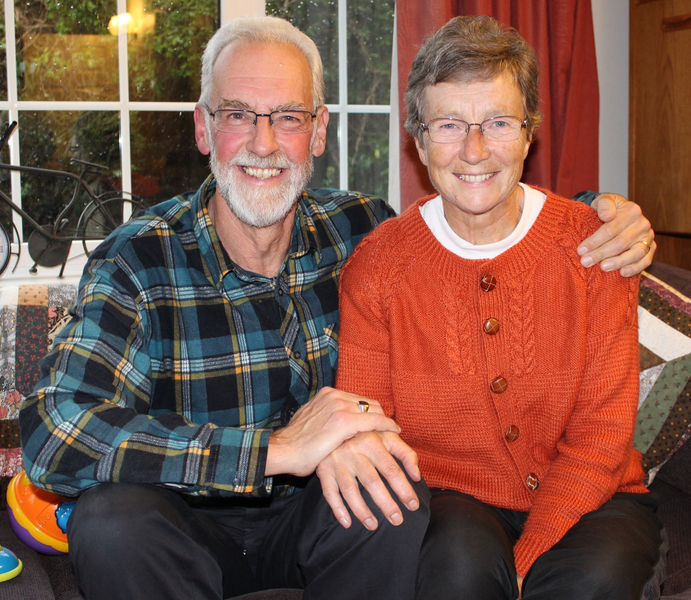 The couple, from Holy Rood Church, Stubbington, have fostered children from babies to 18-year-olds who weren’t able to remain with their birth families. And their motivation to help has been their Christian faith.

They are sharing their experiences as part of a campaign to inspire churchgoers from south-east Hampshire and the Isle of Wight to adopt and foster children and young people. The Church of England’s Diocese of Portsmouth, the Christian charity Home for Good, and Portsmouth City Council are working together to promote the idea among Christian families of all denominations.

The three organisations will jointly host an event at the top of the Emirates Spinnaker Tower, from 7pm-9pm on Wednesday 18th November, for anyone interested in finding out more about adoption or fostering.

Laurie and Ethel have helped to demonstrate God’s love to children and teenagers who desperately need to experience love of any kind. They’ve fostered those who need respite or emergency care, those who will be adopted, and those facing court cases.

“We do it because we want to give something back to these children,” said Laurie, 63. “You always see some kind of change in every child, even if they are not huge changes. It is a sacrifice, and your whole life will change as a result of fostering. But it is hugely rewarding, and it is something we feel called to.”

Laurie had served in the Royal Navy, so had never lived in the same place for longer than three years. But when the family came to Stubbington, he knew he would be based in HM Naval Base in Portsmouth for a significant period. The couple independently heard a radio advert from Hampshire County Council seeking foster parents and felt it was a sign from God.

“Fostering had been at the back of our minds for a while, but it hadn’t been practical,” said Laurie. “But we prayed about it, and felt God speaking loud and clear. We were fast-tracked through the process in six months. And we also had to get our own children on board with the idea, as they were 7, 9, 11 and 13 at the time.

“We’ve cared for 66 children since, and we pray for each of them once a week. In the early days the average age was 13, but more recently it’s been about nine years old. We started by fostering one child at a time, but now we can have three - including sibling groups of three. The longest time someone has been with us is 18 months, but it’s usually shorter.

“We had three girls together once and two of them improved by eight reading levels in a term. Another girl who was three didn’t know her colours when she arrived, but ended up doing times tables.

“It’s had a positive effect on our own children too. They were all very secure; they knew that us loving other children wouldn’t diminish our love for them. They’ve really benefited from it by appreciating all the positive things in family and life that they have, and have gone on to care for others. Rachel is a primary school teacher, and Phillip hopes to be ordained in the Church of England next year.”

And Ethel, 60, said: “Lots of the foster children find it difficult to come to terms with the idea that there is no confrontation. They ask us why we don’t shout and swear, or why we don’t hit them. For some of them, the only attention they’d had in the past is when they are naughty and were hit.

“One lad, who was 14, went out and came back many hours after dinner time. We told him that, as he knew, dinner was gone long ago, but that he could have some toast etc. He never missed dinner again. It’s those kind of boundaries that they’ve never had before, yet need.”

Some of those children have been to their church and enjoyed Messy Church, the youth group or the toddler group, each of which Laurie also helps at. They need to ask whoever has parental authority over the child for permission to take them to church – or the teenager themselves, if they are over 16.

“Our faith sustains us,” said Laurie. “Sometimes it is challenging, and you need God’s strength, much as any Christian parent does. It’s fine to explain to the foster children that ‘Christians believe that…’, but of course we can’t proselytise. Some of them want to come to church activities, and some don’t. Three foster children came with us to Messy Church for two years after they had left us.

“People from our church do help us and pray for us – especially the home group, men’s group and prayer triplet. They’ll ask us how things are going, they’ll give us toys, clothes and other practical support. And we’ve helped other couples in our congregation - and more widely - who were thinking of adopting or fostering; some are now doing it.”

The couple put their fostering on hold recently while they spent three months cycling and camping across Canada. They also look after their own grandchildren three days a week, so have reduced to emergency and respite only for a while. But they are keen to see others start; the need is huge.

“If people are thinking about it, I’d suggest they pray about it, make sure they both feel called, and include their own children in the conversation, if they have children,” said Laurie. “They need to listen to God, read books about it, and make sure they aren’t looking at things through rose-tinted spectacles.”

The diocese’s campaign to promote adoption and fostering in church families was inspired by a similar campaign in Southampton, where churches of all denominations worked together to find 40 new foster families. It prompted Portsmouth City Council to ask Portsmouth’s Anglican diocese if they could do something similar.

Volunteers are speaking at church services across Portsmouth to encourage worshippers to consider the issue. And the special introductory event at the Spinnaker Tower on November 18 will involve a speaker from the charity Home for Good providing Christian inspiration, and city council officers providing practical details. There’s no need to book - anyone interested can just turn up.

The Bishop of Portsmouth, the Rt Rev Christopher Foster, said: “These children who need our help are already living in our parishes, perhaps with temporary foster families, or in the care system. Those of us who have known both the joys and the tensions of childhood can help. Those of us in churches can support our friends who choose to adopt and foster.

“Of course, Christians aren’t the only ones who can provide loving families, but for many Christians who do adopt and foster, their faith is often the prime motivation. This is an important initiative, which has my full support, and I hope it will inspire more families to come forward.”

To read stories of other Christians who have adopted and fostered, click here.