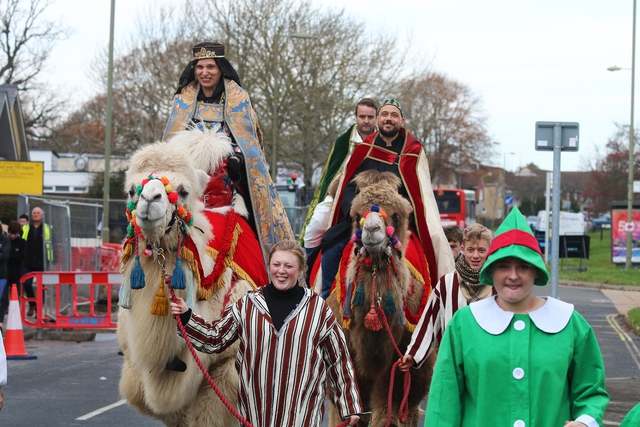 SHOPPERS stared in amazement as three real-life camels strode through their shopping centre - ridden by local people in fancy dress.

The three camels paraded from St Francis Church, Leigh Park, to the Greywell Shopping Centre as part of the church’s Starlight Festival. Local people walked alongside the procession, or hung out of bedroom windows to take a look, while car drivers did double-takes as they spotted the camels walking along the road.

They were ridden by two men and a woman, echoing the journey of the three wise men to see the infant Jesus, which is part of the traditional Christmas story. The camels came to a halt outside Santa’s Grotto in the Greywell, and shoppers joined worshippers singing Christmas carols.

It was part of the Starlight Festival, which included art and craft, spiritual reflection, performances and refreshments inside St Francis Church. The pre-Christmas event is designed to showcase what various community groups will do to mark the festive period, and to help foster community spirit.

Among the local groups providing entertainment were the Leigh Park Community Singers, singer Lara Jeliff, the Egyptian dance group Aziza, and Fit’n’Funky. Pupils from local schools had also created hundreds of paper stars, which were decorated and displayed inside the church.

And the three camels, which came from Joseph’s Amazing Camels, were outside the church for visitors to see throughout the morning.

Ian Lambie, manager of the Greywell shopping centre, was one of the three camel riders. “I’d been on a horse before, but not a camel,” he said “It’s quite a bumpy ride. And it’s interesting to see the shock on some people’s faces as they see us.”

And Nicky Parker, who had also ridden a camel at the same event last year, said: “Last year’s camel was smaller and only had one hump. This one was larger and had two humps, which is actually more comfortable, I volunteered to ride a camel last year because of my associations with the church – I’ve had two of my children christened here.”

This is the third Christmas in the past four years when worshippers in Leigh Park have organised a procession of camels. In December 2016, camels processed as part of the Community Nativity Play, which took place in St Clare’s Church, Warren Park. And they returned last year for the first Starlight Festival.

The vicar, the Rev Jonathan Jeffery, said: “Camels are gorgeous creatures and we love seeing them parade around Leigh Park, surprising everyone and raising smiles as they go. They remind us of the Christmas story and the three kings making their way to meet the baby Jesus.

“Last year’s Starlight Festival was a lovely occasion, and we were delighted to be able to run it again this year. Our community groups offer many ways to ease the stress, and maximise the fun of Christmas, and we want to support their work by helping make those offers open and accessible to everyone under one roof.”

Among the groups showcasing their work was the Hampshire development charity Active Communities Network, which uses sport as a pathway into education, training and employment. They showed visitors some of their boxing skills and made fruit kebabs.

Project co-ordinator Aysha Coker said: “It’s been good fun today, and there was a lot of interest in the boxing, which we offer as a non-contact sport for eight to 18 year olds. We’re based at Front Lawn Recreation Ground, and it’s good to have this contact with local families.”

Other groups involved included Havant Passion Play, the PO9 Foodbank, Mind, Age UK and the Havant Police. And there was a chance for people to find out more about the Big Wrap, which involves donating Christmas gifts to those in the local community, and a Christmas Day meal in Park Community School for those who would otherwise spend the day on their own.

Tickets were also on sale for the annual pantomime run by St Francis and St Clare’s Churches. Dick Whittington and his Cat will be performed by a cast of 45 local residents at St Clare’s Church, at 2pm and 6pm on Saturday 7 December, and at 2pm on Sunday 8 December. Tickets, priced at £2.50 (adult), £1 (children) or £6 (families) and are available on 023-9247 5276.

And local residents were also told about the Crib Service at St Francis Church, which will include real-life donkeys. It happens at 5pm on Christmas Eve.

To see more photos of the camels, click here