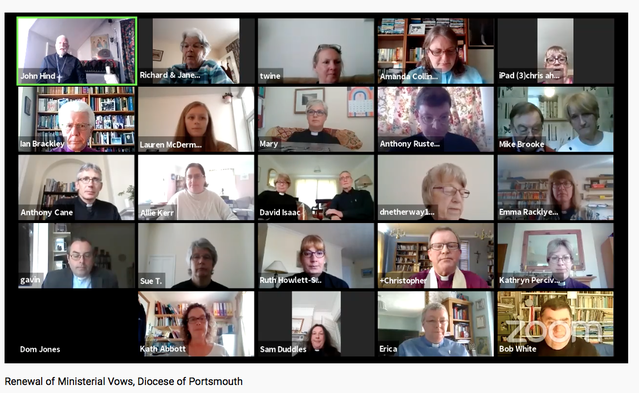 THOUSANDS of people took part in digital services that were live-streamed or pre-recorded by our churches over the Easter weekend.

Regular worshippers and non-churchgoers alike went online to participate in Maundy Thursday gatherings, Good Friday reflections and Easter Sunday celebrations as they recalled the death and resurrection of Jesus.

More than 10,000 people were reached by worship that was shared by Portsmouth Cathedral’s Facebook page over the Easter weekend, with another 1,300 watching via Youtube. And more than 12,000 watched services hosted by the Diocese of Portsmouth’s Facebook page, including services led by the bishop on Maundy Thursday and Easter Sunday. Another 1,000 took part via Youtube.

Although both Facebook and Youtube views include those who may only have watched for a few seconds, the figures outstrip the numbers who might have physically attended services during a normal Easter weekend. In 2019, a total of 2,650 people attended services at Portsmouth Cathedral over the Easter weekend, with 620 attending one of the services on Easter Day.

At least 4,200 people have now viewed a special Easter morning celebration live-streamed from Bishop Christopher's home via Facebook Live, with more than 1,200 engagements – shares, likes, clicks and comments - during and after the Eucharistic service. Three brothers, James Cuthbert, 14, George, 12, and David, 10, who are all choristers from Portsmouth Cathedral, provided music and the bishop’s wife, the Rev Sally Davenport, led readings and intercessions.

Bishop Christopher said: “On the first Easter Sunday, Jesus’s followers were uncertain about the future, just as we are uncertain about the future today. The news of Jesus’s resurrection was surprising and unexpected, but it proved he was God sent to earth to save us. That small group of followers then transformed the world with news of the resurrection, which brought life and hope to everyone. In the same way, the risen Jesus asks us to help to transform and serve our world.

“It was humbling to be able to speak directly into people’s homes with the message that Jesus’s resurrection can transform all our lives. At this time, when so many people are grieving for the loss of loved ones, it was a privilege to be able to share the incredible Easter message, that Jesus brings us life after death, light after darkness and hope from despair – something we all need to hear in these difficult times.”

And the parents of the choristers, David and Arjana Cuthbert said: “It was a great honour that the boys were asked to do this. It was also a good insight into how hard it is to coordinate three boys to sing together - a big thank you to David Price and the Cathedral choir for all their hard work over the years.”

A 15-minute children’s reflection on Good Friday, led by diocesan schools adviser Sue Bowen from her garden and kitchen, attracted more than 2,500 views on Youtube. Among those watching were the children of key workers in C of E schools across our diocese. A Good Friday all-age service led by Canon Jo Spreadbury from Portsmouth Cathedral reached 1,700 people via Facebook Live.

And a Maundy Thursday service hosted by the bishop, which involved 100 clergy and Readers renewing their ministerial views via a Zoom video conference call and more watching via Youtube, reached more than 500 people via Youtube and 1,100 via Facebook.

Other churches across the diocese have seen large numbers participating in their online services, often more than their average congregation size. The vicar of St Faith’s Church, in Lee-on-Solent, the Rev Paul Chamberlain, broadcast multiple services on Youtube from his home over the Easter weekend, using a new video mixing desk that the church had just bought.

More than 1,100 people tuned in via Youtube over Good Friday and Easter Sunday with the largest single figure - 248 - participating in the Easter morning Eucharist. A sunrise service was also broadcast at 6am on Easter Sunday morning, which included the lighting of the traditional Easter fire. The church has also been live-streaming Morning Prayer every day, attracting between 50 and 80 worshippers each time to a service normally said by a handful of people. On Easter Monday, Morning Prayer from St Faith’s reached 1,600 people via Facebook.

Worshipper Lynda Sheffield said: “Congratulations for such an excellent series of services throughout Lent, Holy Week and today. The whole live-streaming was so professional and I’m sure loads of people have said this, but I felt that I was there in church rather than at home. Dawn was so lovely this morning with the bird-song, the fire and then the empty cross lighting up as the fire enlarged.”

St Peter’s Church, in Petersfield, attracted 235 people to watch its Palm Sunday service on Youtube, with 1709 following it via Facebook, and 241 engagements - shares, clicks, likes and comments. On Easter Sunday, 164 people participated via Youtube, 3,211 by Facebook and there were 495 engagements. The vicar, Canon Will Hughes, has also videoed daily reflections that have been placed on Facebook with an average of 130 people reached each time.

One retired admiral who captained a ship in the Falklands war said: “Thank you for streaming Holy Eucharist into our homes this morning. Rue and I very much felt the presence of the other 60 or so who were joining in; and at the point ‘The Lord is here’ followed by the response ‘His spirit is with us’, there was a strong feeling that His spirit really was with us. Just as in action, when well rehearsed drills are something to hang on to at frightening moments, so the familiarity and meaning of this morning’s service is a great support and comfort at a difficult time.”

A total of more than 3,900 worshippers were reached by services hosted by St Mary’s Church, Fratton, in Portsmouth, across the Easter weekend, with the largest number - 819 - participating in its Easter Sunday service.

Clergy have also been keen to reach those who are not necessarily able to participate in digital worship, phoning approximately 250 people across the parishes of St Mary’s and All Saints (with which they are linked) each week, and shopping for groceries and medication for around 15 people. The parish also sent in the post packs of palm crosses, worship resources and general information to 80 people who were unable to access such information online.

On the Isle of Wight, Newport Minster has taken a different approach, gathering together worshippers via Zoom video conferencing. They chat and pray together every day at 11am, and have also established a ‘Hymns on the Piano’ broadcast, for which worshippers send in requests for hymns and songs to be played by director of music Steve Parker. He has now done this five times via Facebook Live.

At nearby St Mary's Church, Carisbrooke, a Facebook video of the Easter message from the Rev Marcus Bagg reached 604. His Maundy Thursday reflection reached 333, and a video showing people's palms decorated with crosses for Palm Sunday reached 826.

And just under 1,000 people tuned in for an Easter Sunday service led by Canon Tom Kennar of St Faith’s Church, Havant, with 211 comments left both during and after the service. Tom said: “Many ‘virtual congregation’ members have told me that they are non-churchgoers who have really appreciated the opportunity to dip their toes into God through their tablet and phone screens.”

Bishop Christopher will continue to live-stream Sunday morning worship at 9am on each of the five Sundays between now and Ascension Day, and will reflect on some major themes of Easter. This Sunday (April 19) he begins by focussing on the Easter candle, burning particularly brightly in gloom and darkness, as we read the gospel story of Thomas proclaiming the risen Jesus as Lord and God.