Bishop to bid farewell after 10 years in the role 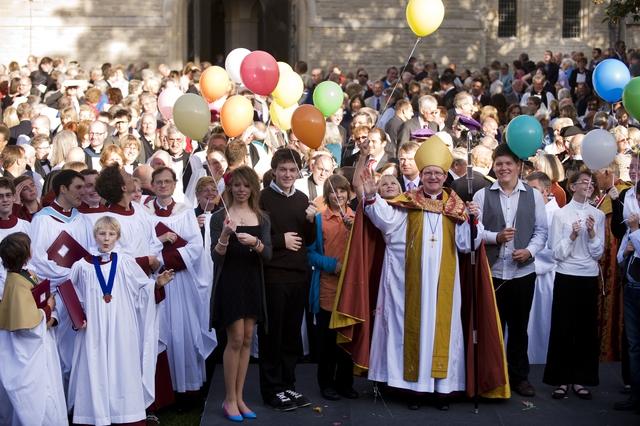 THE Bishop of Portsmouth, the Rt Rev Christopher Foster, will retire after a farewell service at Portsmouth Cathedral on April 24.

The 67-year-old will step down as the ninth Bishop of Portsmouth after more than 10 years in the role. He will retire at the same time as his wife, the Rev Sally Davenport, who is team rector at Holy Trinity and St Columba, Fareham.

Because of Covid restrictions, there are strict limits on the number who can be physically present in the cathedral for the farewell service. But as many civic, military, church and community representatives as can be safely fitted into the cathedral have been invited. Hundreds of others will watch the live-streamed service, which starts at 4pm, at home.

They will see the symbolic moment when Bishop Christopher leaves his crozier – the shepherd’s crook that signifies his role as leader of his flock – by the altar at the east end of the cathedral, before processing through the building and leaving by the west doors. From that moment, he is no longer Bishop of Portsmouth.

This symbolic moment will be accompanied by a specially-commissioned piece of music, written by contemporary US composer Nico Muhly. His setting of Hymnus in Natale Martyrum will receive its global premiere at the service. Nico used the notes C and F – the bishop’s initials – to be played throughout the second half of his piece, as part of his tribute.

Nico Mulhy said: “The bishop and I know one another through his daughter Miriam, who is a dear friend. I always enjoy writing music for specific occasions, and the setting-down of a crozier is pretty much as specific as you’re going to get. It’s an honour to have been asked to write something for this occasion and I hope that the piece is something that is resonant with everybody present there, no matter what the reason."

Tributes from past and present colleagues

Fellow bishops and colleagues have paid tribute to Bishop Christopher, for his friendship, care for others and his thoughtful ministry.

The Bishop of Stepney, the Rt Rev Joanne Grenfell, who worked alongside him as Archdeacon of Portsdown, said: “Christopher was a wonderful colleague to me: wise, generous, and supportive. He is a fundamentally good and secure person, and that makes the people around him feel secure and valued in their roles.

“We were able to be imaginative and brave in our approaches to ministry in Portsmouth diocese, often leading the way and never ducking the challenges that we faced, because he had the foresight to know that change was necessary and the courage to enable it to happen.

“Together, Christopher and Sally have offered warm hospitality, drawing colleagues and their families into the friendship of their household. There are legacies in the form of a welcoming, caring diocese which is sharing the gospel in fresh ways with new generations. I am thankful for his friendship and his ministry as Bishop of Portsmouth.”

The Bishop of Dorchester, the Rt Rev Gavin Collins, who worked alongside him as Archdeacon of the Meon, said: “Christopher has been first and foremost a pastoral bishop, seeking to know and to care for his clergy, their families and congregations, and, indeed, the wider communities across the Diocese of Portsmouth.

“I have had the privilege of seeing him engage with pupils in a primary school, sixth form students on a visit to the Houses of Parliament, council leaders, mayors and asylum seekers. On all occasions and with all those he meets, Christopher has been consistently himself – a godly priest, with a genuine compassion for, and interest in, those he is meeting, as he seeks to demonstrate the love and interest that the God he serves has in them also.

“I have worked with Christopher in two successive dioceses, as he was my suffragan bishop when I was in St Albans Diocese, and now for these past 10 years has been my diocesan bishop in Portsmouth. It has been a joy to count Christopher as a friend, a mentor and a colleague in ministry.”

And the Very Rev Dr Anthony Cane, Dean of Portsmouth, said “Christopher has been an outstanding Bishop of Portsmouth for more than a decade, making the tricky balance between serving the national Church and his local diocese look effortless, when in fact it is anything but.

“It is easy to forget that his richly deserved reputation as a pastoral bishop, who really knew and cared about every corner of the diocese, was only possible through a disciplined programme of travel, by both land and sea.

“The hospitality he and Sally offered at Bishopsgrove, to a whole variety of people from the wider community as well as the churches, was extraordinarily extensive and widely appreciated.

“As for the ordinations, confirmations and other cathedral events at which he presided, there was always a sense of the personal and the holy, and a real connection with all those who were present. In these and many other ways, Christopher’s ministry will be much missed, and we offer he and Sally a heartfelt ‘thank you’ as their retirement begins.”

Bishop Christopher had delayed his retirement to lead the Diocese of Portsmouth through the Covid pandemic. The process to find his successor has already begun, with meetings of the Crown Nominations Commission, chaired by the Archbishop of Canterbury, expected to identify suitable candidates for the post this summer.

While that happens, the Area Bishop of Edmonton will help to lead the Diocese of Portsmouth in the interim. The Rt Rev Rob Wickham, will be the ‘commissary bishop’ for the diocese, which is one of only two in the Church of England to have no suffragan (assistant) bishop.

Bishop Christopher said: “It has been a privilege to serve as bishop in this diocese for over a decade. Because we are a small diocese with a family feel, our clergy and lay people have been able to collaborate effectively and respond quickly to changing circumstances – as the past year has shown.

“Over the past 10 years, I have seen courage, generosity and resourcefulness as our congregations have faithfully shared God’s love, through prayer, worship and serving others.

“Thank you to all those who have prayed for us and worked alongside us over the past 10 years, in the churches and communities of south-east Hampshire and the Isle of Wight. Sally and I will be sorry to leave so many valued friends and colleagues.”

Highlights from the installation service for Bishop Christopher as Bishop of Portsmouth in September 2010:

Christopher Foster grew up in the industrial West Midlands and in Surrey before studying economics at Durham and Manchester Universities and briefly working as an economics lecturer.

He was ordained in 1980, served as a curate in Wolverhampton, and as chaplain of Wadham College, Oxford. He became vicar of Christ Church, Southgate, in London, in 1986 and then worked on the staff of St Albans Cathedral from 1994.

He was consecrated as Bishop of Hertford in 2001, one of two suffragan (assistant) bishops in the Diocese of St Albans. He married Sally, who is also ordained, in 2006 following the death of his first wife, Julia, in 2001. He has two grown-up children, Richard and Miriam, who will be with him on Saturday.

He became the ninth Bishop of Portsmouth in September 2010, succeeding the Rt Rev Dr Kenneth Stevenson. Shortly afterwards, the Rev Sally Davenport was appointed as team rector of Holy Trinity and St Columba churches, both of which are near their home in Fareham.

He is Anglican co-chair of the conversations in England and Wales between the Church of England and the Roman Catholic Church, and led the ecumenical Churches’ Funerals Group. Previously he served as convenor/chair of Churches Together in England for four years, also bringing together Christians of different denominations, and has held other chairmanships nationally. He has also served as a governor at the University of Portsmouth and is patron to a number of local charities.

He spoke nationally for the bishops on economic policy, benefits and welfare, and defence. In the House of Lords, where he was introduced as a Lord Spiritual in 2014, he spoke particularly on the economy and about welfare and benefit issues.

From March to July 2020 he live-streamed Sunday worship from his home in Fareham, alongside Sally, while parishes across the diocese were unable to hold services in church because of the Covid pandemic.

During one such service, he was surprised by his close colleague the Bishop of Salisbury, the Rt Rev Nicholas Holtam, who unexpectedly joined the live-stream to help Bishop Christopher to celebrate 40 years since being ordained.

Relive highlights of Bishop Christopher's 10 years as Bishop of Portsmouth