First host to be linked with Ukrainian refugees 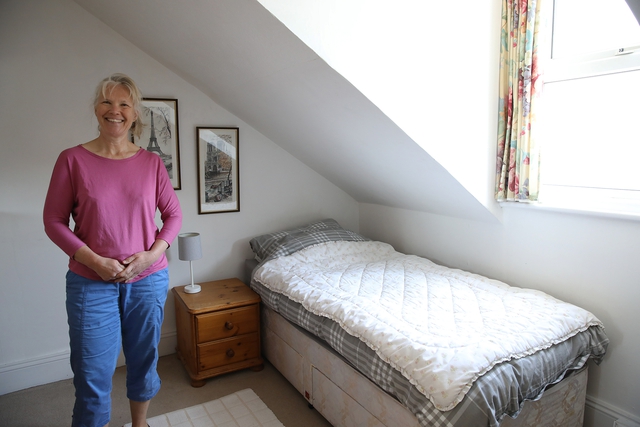 WHEN Judy Walker saw images of Ukrainians forced from their bombed-out homes, she was desperate to help.

She and her husband Andrew are fortunate to have some spare bedrooms, so they immediately offered to host refugees fleeing the conflict, as part of our diocesan scheme. They’ve now been matched with a Ukrainian woman Olga and her 16-year-old daughter Daria, and are waiting to welcome them to Southsea.

Judy and Andrew are among 72 hosts from across our diocese who have offered to welcome a total of 179 Ukrainian guests into their homes, as they flee from the Russian bombardment. Another 49 people have offered to befriend those refugees. It’s an incredible response to the campaign we started just a couple of weeks before Easter.

“When you see the images on TV, it is a tragedy for those people,” said Judy. “Especially seeing women and children, having to choose whether to take the nappies or the cuddly toys or the powdered milk in your only rucksack. As a mother, you put yourself in that position and it feels so sad.

“We immediately thought that we wanted to host. If I lived in Poland or Moldova, I’d be on the train station with a sign offering space. The least that we can do is offer some kindness to people who are desperate.

“It’s easier for us as we’ve hosted foreign students for more than 20 years, which has been a really positive experience. It has been enlightening to experience something of their culture, and it has enhanced our family life as our children Daisy and Oscar – who are now in their 20s – got to talk to people from all over the world as they grew up.

“We also have the space to give our guests the top floor of our house, with bedrooms and a bathroom, which allows them the dignity of living slightly independently. They can eat with us, or cook for themselves. They’ll have a key, so they can come and go as they please. Of course, the refugees aren’t coming willingly, they’ll have experienced complex trauma.

"We've already had a couple of Zoom calls with Olga and her daughter Daria and found out something about each other. Daria speaks English, but her mother doesn't, so we had a Ukrainian translator. They come Lviv, and Olga has another daughter who has just got married and is choosing to stay in Ukraine. Olga works in accounts and is keen to learn English and look for work when she arrives. We're not sure if Daria will go into a sixth-form or a local college.

"One of the things they had to do was to fill in an application form which included all of our personal details, so we could be linked together. I know that Portsmouth City Council has now received that, so they will also provide some support.

"I'm really grateful that Citizens UK allow us to meet together via Zoom in advance, so that we can sort all these issues out. But I can't quite imagine what it must feel like for your future to depend on filling out a form with details from someone who they've only just met online. They are so brave, and I can't quite comprehend what it must feel like for them. This will be different from anything else we’ve ever done. But I hope that we can provide safety, dignity and some laughter and joy into their lives.”

Our diocese launched the drive to find 50 hosts for Ukrainian refugees at the start of April, hoping to inspire churchgoers and others to open their homes and welcome those fleeing from the Russian invasion.

Canon Nick Ralph, social responsibility adviser for our diocese, said: “We have been thrilled with what has turned out to be an overwhelming and positive response to our initial request for help to find hosts for 50 refugees.

“Local people all over the diocese have been exceedingly generous, and we are now moving into the phase of linking refugees with these hosts and then helping them get the visas and checks done before the travel here.”

Our diocese is working in partnership with the charity Citizens UK, which also has partners in Ukraine, Moldova and Poland, and can therefore identify refugees, link them with hosts and organise transport to the UK. Our diocese is one of 20 strategic partners working with Citizens UK. Between them, those strategic partners have recruited 1,000 individuals or families who could host Ukrainian refugees.

Citizens UK can also offer training in how to help those fleeing from conflict, and expertise in the next steps for refugees after the initial six-month commitment runs out.

The charity has helped to welcome 20,000 refugees to the UK over the past five years, using the sponsorship model that is now being used by the government to help with the Ukrainian crisis. It began in 2014-15 by working with 100 refugee welcoming groups across the UK to respond to the crisis in Syria.