MY FAITH: Ordination confirmed God’s call for me to plant new church 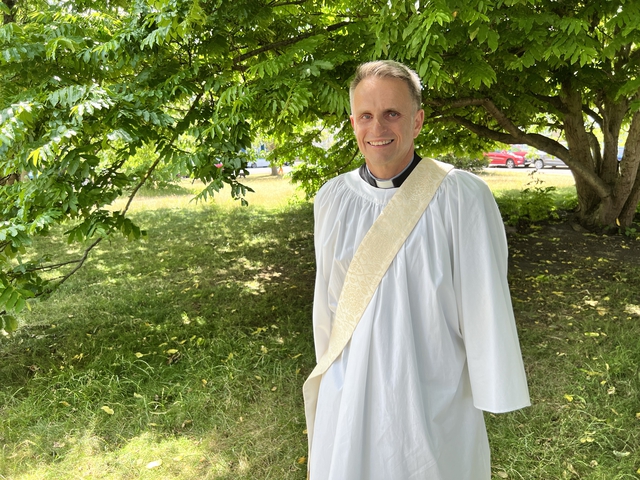 FOR many years, Fran Carabott thought he didn’t fit into the Church of England. When he was ordained in our cathedral this summer, he finally felt as though he did.

More than 10 years ago, he felt God calling him to become a Reverend and to plant a new congregation that would revitalise a closed church. He had no idea how that might happen.

Initial conversations with those in the Church just seemed to emphasise his lack of academic ability. He grew up in the east end of London, left school with no qualifications, and developed his faith in a Pentecostal church rather than in the Anglican tradition.

“I didn’t really fit the conventional model of a vicar at the time,” he said. “Various people asked me if I was sure it was God calling me, and the lack of qualifications was a big concern. However, I felt a strong sense not just of wanting to be ordained, but an overwhelming burning in my heart that God wanted me to bring a church that had closed back to life.

“It was quite frustrating, because the call didn’t seem to disappear, but I kept on getting knock-backs. People would ask me ‘how will you plant a church?’ and I’d have to say ‘I’ve no idea’! Yet God was still saying that’s what he wanted me to do. I knew it was him calling me.”

Fast-forward to 2017, and Fran’s vision suddenly became a reality. He was part of St Jude’s, Southsea, and the church had been asked to develop a new vision for the nearby St Margaret’s Church. That church building had been closed because of major structural problems, and services ceased in 2015.

After holding some initial prayer meetings there, a group of 12 worshippers from St Jude’s launched the church plant – worshipping together in the church hall from October 2017. People came to faith and the vision of building a community with Jesus at the centre came alive. They refurbished the church building, opened a soft play area, café and Pantry – and became an integral part of the local community. Now more than 100 people worship there each week, with hundreds of others pouring through the doors on weekdays.

In a radical move, Fran was initially asked to lead this church plant as a volunteer – he was still working as a gardening contractor at the time. After a year, he was commissioned as a lay pioneer minister. He joined Portsmouth Pathway for theological training in September 2018, and finally was accepted for ordination in January 2020.

“Seeing the vision that I had all those years ago being fulfilled is just incredible,” he said. “And in hindsight, I can see God working, even through those knockbacks. I had to learn patience and perseverance. Being on the Portsmouth Pathway really helped, as I was supported with the academic side of theology studies. People explained things, it was really encouraging, and I even managed to write and pass essays. Discovering that I was dyslexic, with the support of the Pathway, helped me to understand myself.

“I moved to study at St Mellitus for two years, which was a fantastic time of formation and equipping me to become the leader God was calling me to be. It helped me to fall in love with Jesus more and I’ve made lifelong friends.

“And the ordination was a real confirmation. It was a really powerful experience when the bishop laid his hands on my head. It was really the seal from God that said ‘This is it’. I felt like God was saying ‘you’re my man, I’ve called you’. At that moment, I didn’t feel like an outsider. I felt as though I did fit in, I was accepted for who I am.”

Fran had grown up in Stepney and attended a Roman Catholic secondary school. What actually propelled him towards a personal faith came out of a tragedy involving a friend.

“There were four of us running for the bus after school, and two of them – Dennis and Michael – stepped out into the road,” he said. “The lollipop man grabbed Michael, but Dennis kept going. I can still remember his Adidas bag spinning through the air, Dennis’s body laid in the road, and our dreams of growing up together shattered in that moment. I was angry because God had allowed one of my friends to die.

“The whole school went to the funeral mass, and I was sat right behind his family. The priest said Dennis had gone from this world, but was with his heavenly father. He talked about the embrace that the Prodigal Son got from his father, and that Dennis would receive the same embrace. At that moment, I felt a tangible sense that God’s arms were around me as well, taking me from a place of being angry to a complete sense of peace. I’ll never forget that feeling.”

Fran met and married Clare and they had two children, Sophie and Louie. But he didn’t engage with God properly until they moved to Portsmouth and started attending King’s Church, Portsmouth – which now meets in the former St Peter’s Church, Somers Town.

“It was there that my faith developed, and started to come alive,” he said. “I realised I was loved, and the story of Dennis’s death reconnected with me. I had a revelation of God’s love. God started to use me, and we ran ‘Kings Kids’ which involved us knocking on people’s doors and taking their children to church.”

A few years after Fran and Clare switched to St Jude’s Church, they jumped at the chance to lead the church plant, even though it involved them moving house to be closer to St Margaret’s.

“It was a bold step to ask me to lead a church as a volunteer,” he said. “One of the church planters was the Rev Jeannette Hayward, who was ordained in 2018 and then sadly died of cancer a few months later. She was a real inspiration and constantly encouraged me when I felt like giving up. It was a real honour to wear her stole at my ordination.

“The community here at St Margaret’s are so fantastic. I love them, and it really feels like a second family. There is where God has called me, and it feels like home.”

To find out more about St Margaret's Church, click here