Formal opening of our newest C of E school 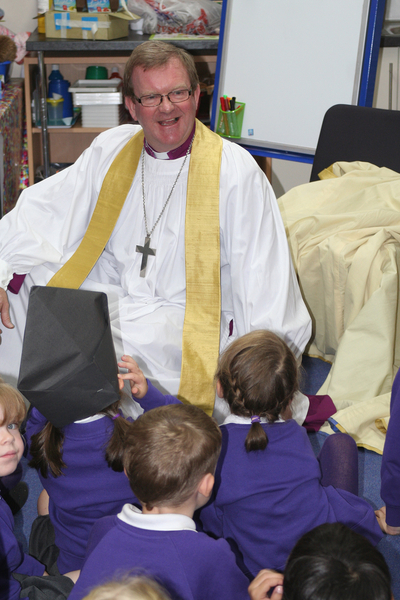 Bishop Christopher talks to children in the classroom 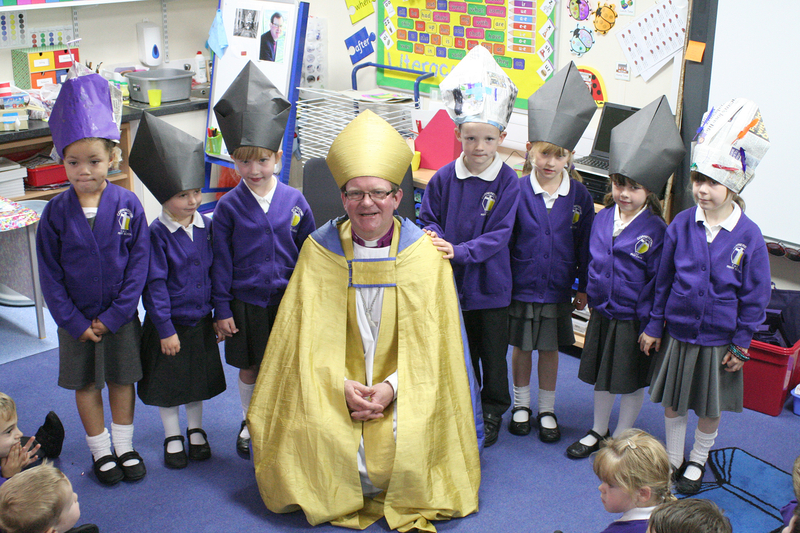 Children show the bishop the mitres they made before his visit 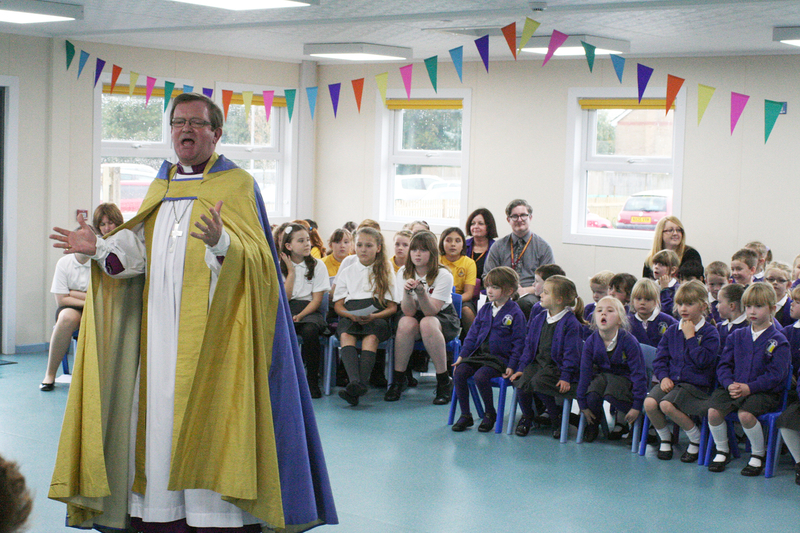 Bishop Christopher talks about Jesus being the cornerstone of our faith 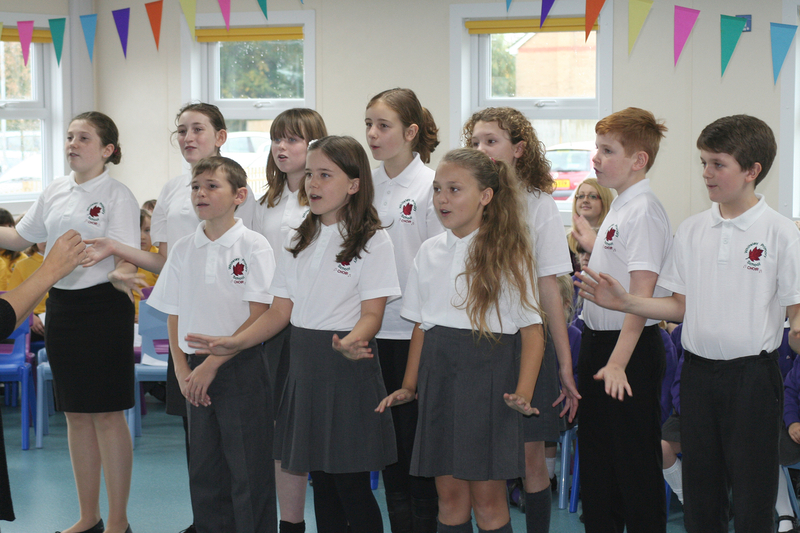 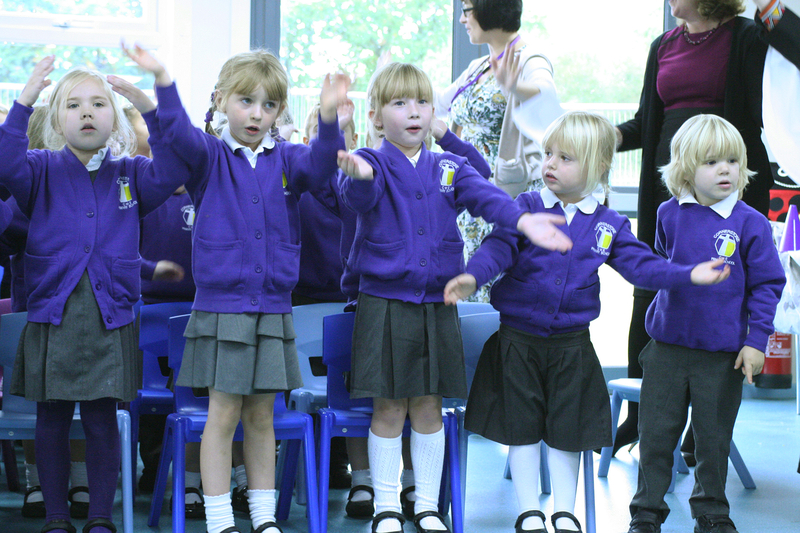 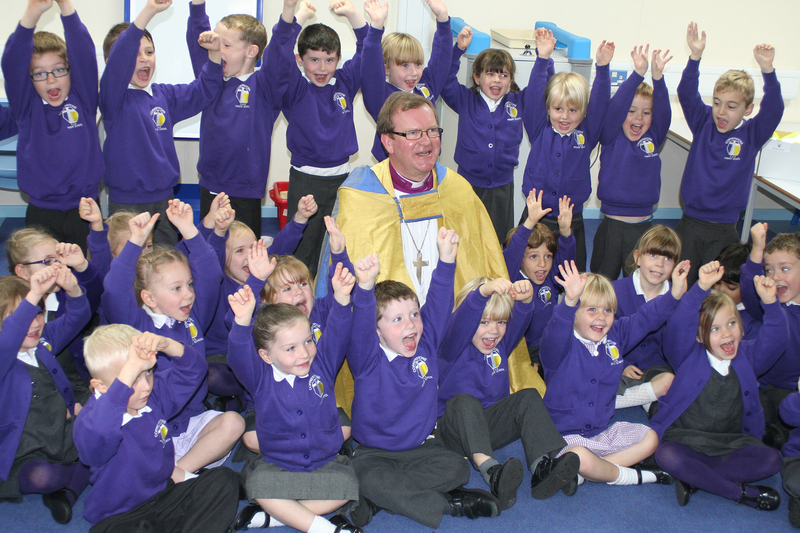 Celebrations on their official opening day

The bishop spoke to the four, five and six-year-old pupils at Cornerstone C of E Primary in their classroom before helping to lead a special service in the hall.

Parents, staff, governors and invited guests heard Bishop Christopher explain that the name of the new school reflected the fact that Jesus is the cornerstone of our faith. He then led prayers and said a blessing.

Children from Cornerstone Primary, and other groups from nearby Sarisbury Infant, Whiteley Primary and St Anthony’s RC Primary Schools sang as part of the service.

And seven-year-old Fletcher Wilkes, with Oliver Margetson, 6, said a special prayer they had helped to write.

“It’s wonderful to be here with everyone who has helped to build this school,” he said. “The children have just sung about the importance of having good foundations, and foundations are important, not just for a building, but for the whole of life and learning.

“I’ve spent half an hour with the children of Bumblebees and Ladybirds, and we talked about the fact that some of them have been to Legoland. We talked about how you use Lego bricks, and the most important thing is how you build the corner, to bring solidity and make it secure. The cornerstone is important, whatever you are building.

Cornerstone C of E Primary School opened its doors to its first 34 pupils at the start of September, marking the end of years of campaigning by Whiteley families to secure a new school. The new building was built and furnished in just five months, and staff and governors were recruited and places allocated in just eight months.

The links with the Church of England have already been apparent with the active involvement of Whiteley’s new vicar, the Rev Phillippa Mills. She prayed with staff, parents and pupils on the opening day of term, and helped to lead the service at the grand opening on October 22.

Executive headteacher Charlotte Weavers said: “There are so many people to thank, from the diocese, the county council and others who helped us to get to this stage. But I want to thank [vice-chairman of governors] Andrew Saunders, who has been fighting this cause for eight years.”

Fletcher Wilkes said it was “nerve-wracking” saying his thanksgiving prayer in front of a full school hall.

And parent Joline Murray, whose five-year-old daughter Lucy is at the school, said: “It was actually very emotional seeing the school being officially opened when we had wanted it for so long. No one I know has a bad word to say about the school. Lucy and all her friends are doing really well, and it’s great to have it in Whiteley so that we don’t have to drive them miles away.”

The school includes four classrooms, a hall big enough for 210 pupils, a library, staff room, offices and an outside play area. It is designed to be a temporary building for the next four or five years until the new 3,000-home development to the north of Whiteley is built. It will then move to a new location in that area.

Until then, the number of children taught there will increase each year as existing pupils grow older and new pupils start in its reception class. Plans have already been agreed for three new classrooms to be added to the building when they are needed.