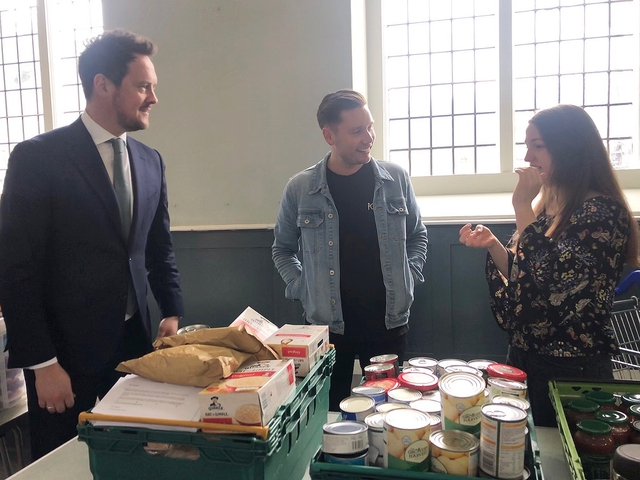 PORTSMOUTH MP Stephen Morgan has praised the city’s churches for caring for the homeless and vulnerable during the current coronavirus outbreak.

He visited the Foodbank based at Harbour Church, Portsmouth, and St Margaret’s Community Church, Southsea, last week and praised volunteers who are giving away food and supplies to those who need it.

And he said: “Thank you to all community groups, churches and local activists who are stepping up and helping out across Portsmouth during this public health emergency. I was really grateful for the team at Harbour Church for showing me their work to practically and emotionally help people in need.”

Caring for their local communities is just one of the ways that churches across south-east Hampshire and the Isle of Wight have been responding to the pandemic. Dozens of churches also live-streamed Sunday services, and many handed out flowers for Mothering Sunday to those who would otherwise be feeling isolated.

Stephen Morgan visited the Foodbank run by Harbour Church from its base at St George’s Church, Portsea. The Foodbank has been running on Thursday afternoons since October in response to a request from a local school to help vulnerable families. Last Thursday (March 19), volunteers saw 10 times as many people accesses the Foodbank as normal. It is open Monday to Thursday (March 23-26) from 11am-12noon.

Harbour Church is also sending food parcels to those self-isolating, as well as to women it regularly serves through its ‘Spa 61’ ministry – some of whom have been victims of domestic violence, are refugees or asylum seekers. Volunteers also leafletted 1,000 homes offering practical and emotional support, and worked with Portsea Events Group to put together food parcels to those who responded.

St Margaret’s Church in Highland Road started its community cupboard about nine months ago, and it’s usually open every Thursday and Friday, alongside its community café and shop. People can donate food and supplies that can be handed out to others.

Pioneer minister Fran Carabott said: “Last week was incredible, with dozens of people from our community donating food, toilet rolls and supplies, and people going out of their way to buy stuff for us. We had 25 people donate food and 15 needy people collecting it. We'll be open from 10am-11am, on Monday, Wednesday and Friday this week.” (March 23, 25 and 27)

Stephen Morgan said: “St Margaret’s is a special place for my family, as it’s where my grandparents married. Today, it’s a special place to bring our community together to help Portsmouth families.”

Friday Fridge, based at St Jude’s Church, Southsea, opened last Friday night (March 20) with a special takeaway service. Normally, Friday Fridge offers the homeless, vulnerable and those recovering from addictions free tea, coffee, bacon sandwiches, cheese toasties, and the chance to chat with volunteers late on a Friday night. Instead, the church opened its doors to allow guests to take away food that had been hygienically prepared.

Sunday Suppers, which is based at St Simon’s Church in Southsea, also donated food to those who are vulnerable and homeless last night (March 22). They normally invite guests to share a hot meal inside the building each Sunday night. Instead, the church worked with Hive Portsmouth to hand out food from its supplies in the church car park to those who are needy.

Volunteers from St Mary’s Church, Fratton, St Francis Church, Leigh Park, and St Jude’s Church, Southsea, were among those to give away flowers to those feeling isolated as they marked Mothering Sunday in a different way.

And churches across the diocese live-streamed simple worship services via Facebook Live, Youtube and their websites to church members and others watching at home. Ministers preached sermons via mobile phones, worship leaders played guitars and keyboards to help those watching at home to sing along, and those participating were able to say prayers and post comments online. A list of those churches that have been live-streaming services can be found on www.portsmouth.anglican.org/streaming.