Worshippers delighted to be back in church 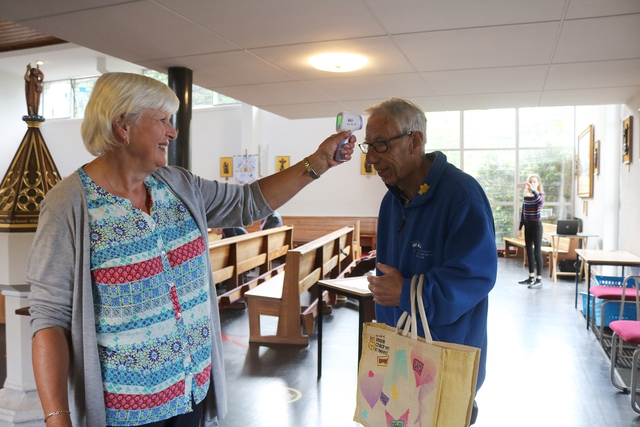 AS you entered St George’s Church, Waterlooville, there was a warm welcome – as well as a temperature gun being pointed at your temple.

Fortunately no one was feverish, so worshippers were directed to the hand sanitiser and to a pew where they could be at least two metres away from others. The windows were wide open to allow ventilation, and there was a one-way system around the building.

This was the first day that public worship had taken place in the church for more than three months. Worshippers greeted each other happily, waving and approaching each other warily to chat before the service started. Around 30 of the normal 100-strong congregation had decided to come, having booked their places beforehand, and their names were ticked off at the door, for track and trace purposes.

A web cam and laptop were prominent in front of the altar, as the service was also being live-streamed to others watching at home. And worshippers smiled graciously as the priest, the Rev Colin Lawlor, explained some of the restrictions still in place to allow public worship to re-start here: no singing, no collections, no processions, and receive Communion where you are sitting. They were just glad to be there, however different the service might be.

As the service progressed, the familiar rhythm of the liturgy reasserted itself, with just a few tweaks, with devices being moved slightly so those at home could see the Bible readings. Although there was no singing, the organ could be played. When worshippers got to the Peace, they shook hands with those in their households and nodded and waved cheerily to others from a distance.

Fr Colin was sure to apply hand sanitiser before consecrating the bread. He then brought it to each worshipper in turn, dropping the host from his hand to theirs in line with the government guidelines.

Norma Kershaw, who has been part of the congregation for five years, said: “It has replenished my soul to be here today. It has made me feel so much better. I did just sit there and weep. It has been good to stay in community with people online, but it isn't the same as being here in person.”

And fellow worshipper Sue Hodgens said: “I enjoyed the whole thing - everything. I enjoyed the sacramental part of the service. Doing things by Zoom is better than nothing, but it makes a massive difference to be here.”

And Fr Colin said: “I’ve been leading services with just me and a web cam for the past couple of months, so it’s strange to have a congregation again. But it is really important that we come together as a community and to receive the sacraments.

“It has probably been easier for us to organise a service within the restrictions than for other churches, as it’s a modern building, and we can open the windows easily. We had an 8am service with about 10 people, who sat on the pews with an ‘X’ on them. Then the 10am congregation avoid the pews with an ‘X’ and use different books, and we won't have another service for 72 hours, so any virus will dissipate in that time.”

St George’s Church will continue to be open on Wednesdays from 4pm-6pm for individual private prayer, and for Eucharistic services on Sundays at 8am and 10am, and on Wednesdays at 10am too. Those who would like to attend can book in advance via the parish office.

Some other churches also opened around the diocese on July 5. Portsmouth Cathedral hosted five consecutive services, at 8am, 9am, 10am, 11am and 12noon, each with 25 worshippers socially distanced across the nave. Its 9am service was live-streamed to those who were unable to be there. The Dean of Portsmouth, the Very Rev Anthony Cane, preached the same sermon five times! The cathedral also will hold five service on July 12, and from July 19 until September, it will host four services at 8am, 9am, 10am and 11am each Sunday.

Worshippers were able to gather at St Barnabas Church, Swanmore, for a traditional Communion service on July 5 at 8am, which was then followed by the church’s first drive-in service at 10am. Worshippers drove their cars into the village hall car park, wound down one of their car windows and joined a ‘Songs of Praise’ style service. They’d chosen certain hymns and songs to sing in advance and the lyrics and prayers were circulated digitally.

Public worship started again at St James, Emsworth and St Thomas a Becket, Warblington, on July 5, with services at 10am in Emsworth and 11am in Warblington. On July 12, worshippers were due to meet outside, in the churchyard, for an outdoor Mattins service from 11am. For more details, click here.

Public worship is also due to start again at St Cuthbert's Church, Copnor, on July 12, for Celtic Morning Prayer. The church can cater for 40 worshippers each Sunday at 9.30am, to keep everyone safe. More details are here.

The government had announced that public worship in churches could restart own July 4 after more than three months in which church buildings were closed by law during the coronavirus lockdown. But they asked churches to abide by certain restrictions, to help keep those attending church as safe as possible.