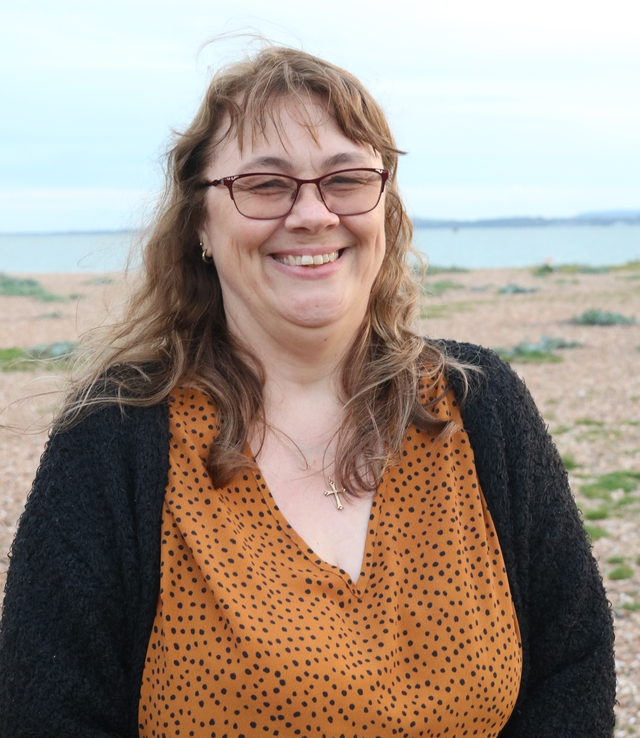 WHEN Mandy Hollingsworth was diagnosed with cancer in the middle of training to become a Reader, she didn’t panic.

God had already helped her through other difficult times, including the sudden death of her father. She was confident he would be alongside her during this illness and treatment. In fact, her faith in God actually increased during that year.

The 48-year-old mum is now preparing to be licensed as a lay minister to serve in the parish of St Mary’s, Fratton. She is one of five new Readers who will be licensed by Bishop Christopher on November 14..

Mandy originally came from Essex, and was living in Portsea when she first started going to church. She enquired at St George’s Church about getting her daughter – who is now 21 – baptised. She felt so welcome that she started attending regularly.

"Everyone was down to earth and so friendly" she said, "I had been baptised myself as a child and had attended Sunday School for a short time but that had been the extent of my Church experience until then."

“One time over coffee after a service, I thought someone asked me if I would do some weeding, so I said yes. In fact, they were asking if I could do a reading from the Bible! I did it, but it was only afterwards they told me I had mis-pronounced someone’s name all the way through.”

She spent a couple of years away from church after her dad died – he was diagnosed with cancer in the August and died in December. Mandy was angry with God. However, she did feel God speaking to her in her grief.

“Max Millett was leading a meditative service and suggested we imagine Jesus and ask him a question,” she said. “I asked ‘Where were you when dad died?’ and I heard God say ‘I was in you’. That’s not the kind of thing I’d say to myself, so it felt like God. It was exciting, but so scary that I fell off my chair.”

She came back to church at the point when she felt ready, and quickly realised she had missed it. The new vicar, the Rev Belinda Davies, sent her on the 10-week Bishop’s Foundation Course. Belinda also asked if she had considered becoming a Reader.

“I really wasn’t sure, as I don’t like to do things that make me the centre of attention,” she said. “I said on the foundation course that I didn’t want to preach any sermons, and people told me that you shouldn’t tell God what you don’t want to do. I went forward to be considered as a Reader, but I kept thinking that someone will say ‘We’ve made a mistake’.”

Mandy spent three years on the Portsmouth Pathway, our diocesan course for clergy and Readers to train together. But in her second year, she was diagnosed with breast cancer and missed some placement time.

“They caught it early, so I had surgery and didn’t need chemotherapy,” she said. “I wasn’t too worried, as my faith had deepened throughout the course. I also had my second encounter with God – I had a vision of God holding his hands out for me, and my climbing into his hands and sitting there swinging my feet. I think the illness actually deepened my faith again.”

By this time, Mandy – who works at St George’s C of E Primary School in Portsea – had joined the congregation at St Mary’s Church in Fratton. That’s where she’ll be serving as a Reader, preaching, leading services and offering pastoral support to others.

“I’m looking forward to being able to help people, and I hope the fact that I’m ‘official’ makes me approachable,” she said. “I have already preached some sermons, despite previously not wanting to, and I think I could be alongside someone who is bereaved before, during and after a funeral.”

Mandy will be licensed as a Reader by Bishop Christopher via Zoom on November 14, along with four other trainee Readers. They are:

Full details of how to take part in the service are here.