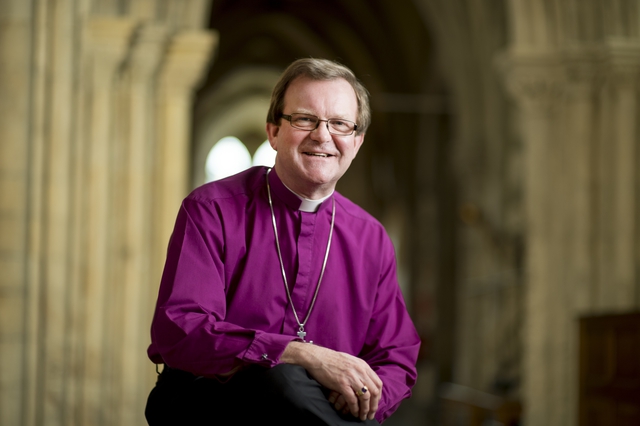 THE Rt Rev Christopher Foster today announced that he is to retire as Bishop of Portsmouth.

Bishop Christopher, who is 67, had delayed his resignation to lead the Church of England’s Diocese of Portsmouth through the Covid pandemic. He will now step down as bishop in April 2021.

He made the announcement on the same day as his wife, the Canon Sally Davenport, told worshippers at Holy Trinity and St Columba Churches in Fareham that she was also to resign as their Team Rector. The couple will retire together and live in Somerset.

“It has been a privilege to serve as bishop in this diocese for over a decade,” he said. “Because we are a small diocese with a family feel, our clergy and lay people have been able to collaborate effectively and respond quickly to changing circumstances – as the past year has shown.

“Over the past 10 years, I have seen courage, generosity and resourcefulness as our congregations have faithfully shared God’s love, through prayer, worship and serving others. I look forward to working with those fellow disciples over the coming months to continue discovering what the post-Covid Church will look like as we renew our commitment to respond collaboratively in changing times.

“It may seem surprising that I should make this announcement just before Christmas, but the timing means that the period that the Diocese of Portsmouth will be without a diocesan bishop will be as short as possible.

“Thank you to all those who have prayed for us and worked alongside us over the past 10 years, in the churches and communities of south-east Hampshire and the Isle of Wight. Sally and I will be sorry to leave so many valued friends and colleagues.”

The Rt Rev Christopher Foster has been Bishop of Portsmouth since 2010. He had grown up in the industrial West Midlands and in Surrey before studying economics at Durham and Manchester Universities and briefly working as an economics lecturer.

He was ordained in 1980, served as a curate in Wolverhampton, and as chaplain of Wadham College, Oxford. He became vicar of Christ Church, Southgate, in London, in 1986 and then worked on the staff of St Albans Cathedral from 1994.

He was consecrated as Bishop of Hertford in 2001, one of two suffragan (assistant) bishops in the Diocese of St Albans. He married Sally, who is also ordained, in 2006 following the death of his first wife, Julia, in 2001. He has two grown-up children, Richard and Miriam.

Bishop Christopher became the ninth Bishop of Portsmouth in September 2010, succeeding the Rt Revd Dr Kenneth Stevenson. Shortly afterwards, the Rev Sally Davenport was appointed as team rector of Holy Trinity and St Columba churches, both of which are near their home in Fareham.

Re-live the installation of Bishop Christopher in September 2010:

The bishop led the development of a framework for outreach and services in the parishes, chaplaincies and communities of south-east Hampshire and the Isle of Wight – entitled Live | Pray | Serve.

He has supported initiatives where churches or other groups are seeking to support those in poverty, unemployment and need. Each year, he launched a Bishop’s Lent Appeal which raised tens of thousands of pounds annually for charities involved in combatting food poverty, homelessness, debt and other issues.

He is Anglican co-chair of the conversations in England and Wales between the Church of England and the Roman Catholic Church, and leads the ecumenical Churches’ Funerals Group. Previously he served as convenor/chair of Churches Together in England for four years, also bringing together Christians of different denominations.

He speaks nationally for the bishops on economic policy, benefits and welfare, and defence. In the House of Lords, where he was introduced as a Lord Spiritual in 2014, he speaks particularly on the economy and about welfare and benefit issues.

From March to July 2020 he live-streamed Sunday worship from his home in Fareham, alongside Sally, while parishes across the diocese were unable to hold services in church because of the Covid pandemic.

During one such service, he was surprised by his close colleague the Bishop of Salisbury, the Rt Rev Nicholas Holtam, who unexpectedly joined the live-stream to help Bishop Christopher to celebrate 40 years since being ordained.