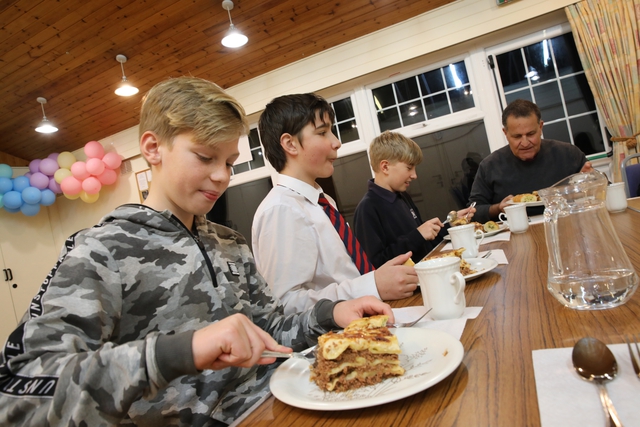 BISHOP Jonathan met teenagers from a church youth group that brings together young people from around Lee-on-the-Solent and Gosport.

The TGI Thursday group meets at St Faith’s Church, where those aged between 11 and 14 share a meal together, ahead of discussion, craft or activity that helps to develop their faith.

It was originally launched last year as a place where young teenagers could go through a Youth Alpha course to discover more about Christianity. It now attracts young people from local churches of different denominations each Thursday night from 5.45pm. Volunteers cook a hot meal in the parish centre kitchen each week.

The bishop was invited as part of a series in which local Christians could be quizzed about their faith and the difference it has made to their lives.

Isaac Mellors, aged 12, said: “It’s good to have Christian friends and to pray together and to talk about faith.”

MJ Aspinall, aged 13, said: “I like to debate with people my own age, because I’m interested in the ins and outs of these issues.”

And Daniel Chamberlain, 12, said: “It’s nice to see people, and to expand your faith. It’s good to learn about what the Bible says and how to care for each other.”

One of the leaders, Rebecca Parrett, said: “We wanted to start a group for younger teenagers to do Youth Alpha. Some are from different churches, so sometimes they invite each other to their churches on a Sunday and each of them does a ‘church tour’.

“We try to find creative ways to approach faith, so that might be discussion about how it affects real life, at home or school, or it could be doing some art or poetry. We recently asked the vicar, Paul, to talk to us about faith and science, because he’s a scientist.”

The group runs alongside a separate youth group for older teenagers, called KFC – Kids for Christ – which started more than five years ago, also as a Youth Alpha course shared between St Faith’s and St Mary’s, Alverstoke.

It was also originally for Years 7 and 8, but now those attending now tend to be in Years 9 to 11 – which means between 14 and 16 years old. They meet on a Wednesday evening in St Mary’s parish centre, for Bible study, games, discussion and a meal from 5.30pm.